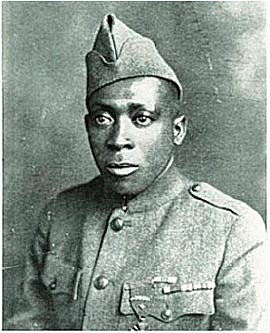 There is no evidence that Kathryn Johnson, whom we featured last week, had any contact with Henry Johnson during their stay in France on the battlefront in and around the Argonne Forest. Both Johnsons were part of the American Expeditionary Force under the command of General John Pershing. Kathryn, along with her associate and comrade Addie Hunton, later wrote about their service during World War I, while Henry was written about for his heroic exploits as a member of the famed Harlem Hellfighters.

An exact date of Henry’s birth is not known, though he told the draft board he was born in Winston Salem, N.C. on July 15, 1892. Not much is known about his early years after he moved to Albany, NY in his teens. For a while he worked as a porter at the Albany Union Station on Broadway. If the year of his birth is accurate, he was 25 when he enlisted in the Army in 1917, becoming a member of the New York National Guard 15th Infantry Brigade, later to be called the “Harlem Hellfighters.” The unit’s basic training was cut short after altercations with white racists in Spartanburg, SC and they were deployed to France. Henry’s 369th regiment, upon arrival in France, went through several mergers and reassignments mainly as laborers before being rushed to the frontline.

But like their stay in the South, their departure from the states was rough and was interrupted several times by inclement weather. A relentless snow storm and an accident of colliding ships further hampered their exit from the harbor. Their ship was severely damaged and the captain wanted to suspend the trip but their commander insisted that the voyage continue. His troops repaired the ship themselves.

Soon, the regiment was joined with the 161st Division of the French Army, and there are conflicting stories about this arrangement, but the consensus indicates that the white soldiers were unwilling to fight alongside the Black troops. An example of the racist treatment they endured occurred with an official document released by the American military warning French civilians about fraternizing with the Black soldiers and that they were inferior human beings. One pamphlet even alleged that the Black troops were akin to apes and had tails. By New Year’s Day, 1918, Henry and his fellow soldiers were on the battle fields of France. And the French citizens and soldiers were glad to have the Black Americans join them in the fight against the Germans.

Once on the frontline with French troops, the Hellfighters were equipped with French rifles and helmets and dispatched to the Argonne Forest in the Champagne region of France. On a spring night in 1918, Henry was assigned to an observation post when a platoon of Germans attacked him. Armed with a few grenades, a rifle that was soon out of ammunition, a bolo knife, and his bare fists, Henry subdued the raiding party. His courageous combat was decisive in rescuing his fellow soldier, Needham Roberts, who had joined him to fight off the Germans before he was wounded.

Henry suffered 21 wounds during the encounter, and his act of valor earned him the nickname “Black Death” and several commendations, including the Croix de Guerre, the highest French honor for a soldier in combat and a first for an American soldier. Over the years, Americans have learned of the gallantry and bravery of Sergeant York, Audie Murphy, and other white military heroes, but Henry and Needham’s story of valor is just as worthy of films, books, and articles. In fact, it was an article that appeared in the Saturday Evening Post by Irvin Cobb that highlighted Henry’s amazing feat.

When the war was over, Henry was one of hundreds of returning soldiers who marched in a victory parade in Manhattan that ended in Harlem. There is a photo in the James Van Der Zee collection of Henry and Needham Roberts posing in his shop, each decorated with the medals that saluted their bravery during the war. Because of their celebrity, they were often asked to speak at various events, which helped them financially and further endeared them in the hearts and minds of Americans. But not all was rosy for listeners who turned out to hear them, and one memorable occasion Henry graphically depicted the abuse they suffered from white soldiers who refused to fight alongside them. As expected, a backlash emanated for Henry to be arrested for his wearing a uniform beyond the prescribed date of his commission. The move also led to the termination of his paid engagements.

The cancellation of his speaking tour was hurtful both from a fiscal and emotional standpoint, both of which contributed to his declining health and prosperity. It is still debated the extent to which he received “permanent and total disability” from the Veterans Administration as a result of his tuberculosis. According to Veterans Bureau records, Henry was awarded monthly compensation and regular visits by Veterans Bureau medical personnel until his death on July 1, 1929. He was only 36 and is interred in the Arlington National Cemetery.

In 1996, Henry was posthumously awarded the Purple Heart by Pres. Bill Clinton. He received a Medal of Honor in 2015 from Pres. Barack Obama. A number of honors commemorating his life and legacy have been given, including a monument which was erected in Albany, NY’s Washington Park in 1991; and a section of Northern Boulevard was renamed Henry Johnson Boulevard. In Dec. 2004, the Postal facility at 747 Broadway was renamed the “United States Postal Service Henry Johnson Annex.” On Sept. 4, 2007, the Brighter Choice Foundation in Albany, NY dedicated the Henry Johnson Charter School. Johnson’s granddaughter was in attendance. In Dec. 2014, the City School District of Albany established a Junior Reserve officers’ Training Program (JROTC) at Albany High School named the Henry Johnson Battalion in honor of Johnson. Currently the program enrolls over 100 cadets.