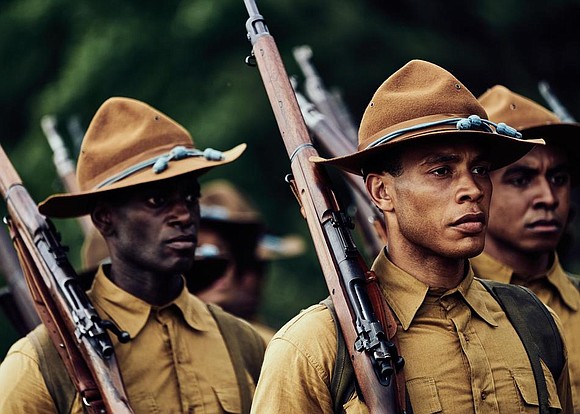 The first scene of “The 24th” is shot in black and white. In tight close-ups, the camera pans across the characters’ faces. They are all Black soldiers sitting tensely next to each other in a packed courtroom. All 64 are defendants in a murder trial. The camera reaches the character who the viewer learns shortly is named William Boston and rests, holds steady. “The 24th” demands that you pay close attention to history.

Most of the action in “The 24th” begins a few months before the opening scene. It’s based on true events that transpired in Houston, Texas during the summer of 1917 when the all-Black 24th Infantry, part of the famed Buffalo Soldiers, mutinied on August 23. In the end, 11 civilians, five cops, and four soldiers died. There were two subsequent trials with 92 additional defendants. Nineteen were hanged, more than 40 received life sentences.

That summer had already brought mass racial attacks against Blacks in Illinois, East St. Louis, and Chester, Pennsylvania, something the unit was aware of when they were sent to Houston in July. The reports of marauding, homicidal white mobs no doubt etched themselves into watchful corners of the soldiers’ brains.

The film’s main character is earnest Sorbonne-educated, do-gooder, naif William Boston, played by Trai Byers (“Empire”). Boston (his first name is dispensed with throughout) is full of ideals about what America is and the responsibilities and status of anyone who is a soldier, regardless of race.

The whites in Houston vociferously beg to differ, as so do some of the Black men serving alongside Boston. So Boston fights a war on multiple fronts, rankling not only the whites but many of his working class fellow soldiers. The impetuous Walker, ably acted by Mo McRae, is so incensed by Boston’s love for himself and his wish to “defend my country and raise the image of the colored man,” he accosts him while they are digging trenches. It’s Cain and Abel between these brothers in arms, with Walker envious and insecure over what Boston has to offer the world, not believing his own gifts amount to much.

Each character in “The 24th” has their own distinct personality to keep things interesting. Though not exactly an antagonist, Mykelti Williamson’s Sgt. Hayes is a detractor of Boston’s, believing he’s a phony with his ooh la la and c’est si bon. Williamson delivers some of the most enthralling scenes in the film, capturing the pathos of a beaten spirit. Hayes cowers behind loud bitter cynicism, railing drunkenly against a lying, credit stealing Teddy Roosevelt.

The other soldiers’ humility allows them discernment. They appreciate Boston’s erudition, his bravery, and his good intentions. Either way, Boston is immediately a cynosure. His white commander, Col. Norton (played by Thomas Haden Church) hones in on Boston’s more palatable flavor of Blackness and, understanding how fatal the brand of Houston Jim Crow is, implores him to relocate to the midwest for officer’s school and fully don the mantle of the talented tenth. Boston resolutely refuses.