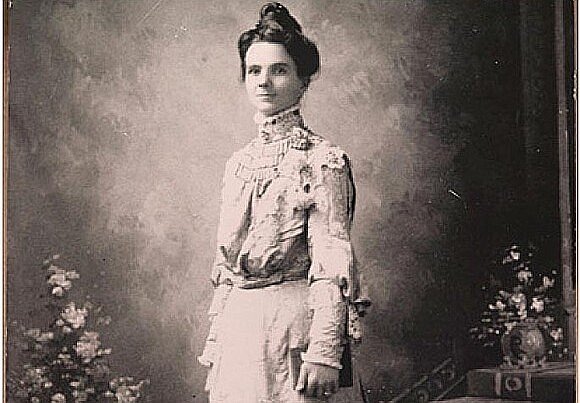 Organizations and institutions around the nation are in preparation for the centennial celebration of the Women’s Suffragette movement. On Aug. 18, 1920, the 19th Amendment was ratified granting women the right to vote. It was a momentous occasion and often lost in the celebrations was the significant role Black women played in the movement.

One of the lesser known women was Adella Hunt who later married Warren Logan. Born in slavery in 1863 in Sparta, Georgia, Adella was the daughter of a white planter and an African American mother. She was the fourth of eight children and was provided with an education at Bass Academy, becoming a certified teacher at sixteen. After the Civil War she earned a scholarship to Atlanta University where she attended Upper Normal College. In 1881, the same year Tuskegee Institute was founded by Booker T. Washington, Adella completed a two-year program, graduated and began teaching in Albany, Georgia at an American Missionary Association primary school.

She joined the Tuskegee Institute faculty in 1883 and five years later married Logan, who was also a teacher at the Institute. Adella taught English and other subjects in the humanities and social sciences, and was the school’s first librarian, serving as well as the “Lady Principal” for a short time. Meanwhile, she forged an enduring warm relationship with Washington. Her husband, like her, was of mixed-race born in Virginia and gained his education after the Emancipation. Over the years at the Institute he would ascend to various leadership positions, along with his duties as principal, treasurer and eventually even a co-executor of Washington’s estate.

Between 1890 and 1909, the couple had nine children, six of whom survived to adulthood. Their youngest son became a surgeon in New York City and one of his offspring was Adele Logan Alexander, who earned her doctorate and later taught at George Washington University. Among her books was a volume devoted to the history of African Americans.

Despite a household of many children, Adella was a devout teacher and held memberships in several important organizations, including the Tuskegee Woman’s Club, an affiliate of the National Association of Colored Women (NACW). She was a versatile and tireless advocate of prison reform, health care and insuring the literacy of Black Americans. But her concern and interest in acquiring universal suffrage consumed most of her waking hours. “In 1895 the National American Woman Suffrage Association (NAWSA) held a convention in Atlanta. Due to the difficulty NAWSA was having gaining passage for a constitutional amendment on women’s suffrage, the organization was looking for support from southern states. NAWSA appealed to white southerners, it “observed state Jim Crow segregation and turned away African American women and men from the convention,” according to one publication that chronicled the event.

Because of her light complexion, Adella was able to gain admission to the convention and was deeply inspired by a speech delivered by Susan B. Anthony. Subsequently, she became a member of the NAWSA and campaigned energetically in Alabama and was also a writer for the organization’s newspaper The Woman’s Journal. Her article about the NAWSA appeared in the NAACP’s The Crisis in September 1912, highlighting the role of Black women in the suffrage movement. “The colored American believes in equal justice to all,” she wrote in the article, “regardless of race, color, creed or sex, and longs for the day when the United States shall indeed have a government of the people, for the people and by the people—even including the colored people.” This was just one of several articles she penned for The Crisis. Her work was also published in the Colored American magazine. Her argument was that Black women deserved the vote, particularly for what they could contribute to overall education and legislation battles in the nation.

Soon, she was widely recognized for her determination to win the vote for women of all colors and found many creative and innovative ways to promote that aim, including participation in parades, lantern slide nights and musical concerts to raise funds. Gaining the vote, too, she believed would be helpful in impeding the abuse and rape visited upon women, and this was an issue that was of critical importance among African American women.

In the fall of 1915, Adella was perturbed by setbacks in the suffrage movement and the personal issues in her marriage left her deeply troubled. These problems, at last, proved a heavy burden and she was committed to a sanitarium in Michigan for treatment. Her conditions were exacerbated with the announcement that her close friend, Booker T. Washington, had died in November. This plunged her even deeper into depression. A month later, on Dec. 10, she committed suicide by leaping from the top floor of a building on the Tuskegee campus.

Five years after her death, the 19th Amendment was ratified, effectively giving women the right to vote. Her legacy is now being recalled, at least by those who have devoted an abiding concern with suffrage, though she may not appear at the top of the list of the many Black women in the movement.