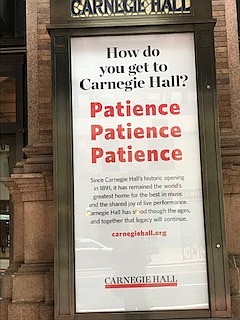 My doctor’s office called to inform me it was time for an in-office visit. Yes, the tele-visits were over and it was safe to return to having the doctor actually touch my chest with his stethoscope, as well as get a health update and have a conversation. Wow, I was so excited about this upcoming visit going downtown. Can you imagine, we aren’t talking about a hot date, a great upcoming concert or a night hanging with friends, no, it’s a doctor’s appointment!

This COVID-19 virus has altered our minds to set up new residence in the scary pages of the great sci-fi author Octavia Butler, where doctor visits have become something to shout about with joyful glee. Just as a point of reference, the visit went well and yes the touch of that stethoscope on my chest was so satisfying.

Leaving the doctor’s office, I decided to get some exercise by walking, since all the gyms were still closed. Walking up Sixth Avenue past Radio City Music Hall and all the closed and some boarded-up shops was very disheartening. What is so amazing about walking in midtown is that it looks like a ghost town, something surely out of a sci-fi movie. In the middle of the summer at 85 degrees, the streets are empty. This time last year you were between the tourists elbowing you as they stumbled by looking up up up at those skyscrapers, and those hustling bustling New Yorkers that elbowed you because you didn’t move fast enough and look out for that damn bike messenger. I miss the elbows and sometimes having to walk in the street because the sidewalks were so busy, or taking the occasional tourist family “look we’re in NYC” photos.

Before long I looked up and found myself in front of Carnegie Hall. Still no people; at this time of day the great performance hall would be open with folks scurrying inside purchasing tickets for classical music as well as jazz. Outdoors would be packed with people. I was standing on the edge of the curb right in front when I remembered one summer afternoon, my brief conversation with the great crooner Bobby Short, who reigned king of the cabaret singers at the Café Carlyle for over 35 years. I had originally met Short at his luxurious Sutton Place apartment maybe a year before when assigned to interview him for this publication. As I stood in front of Carnegie Hall that day, Short came out of the Russian Tea Room dressed summer hip in a grey-striped seersucker suit along with a woman who was just as elegant. He came up to me and said, “Hi Mr. Scott, how are you doing?” and introduced me to “his close friend Gloria.” His friend was Gloria Vanderbilt. The fact that he came over and spoke with me and the introduction put me in the clouds. And then he reminded me, I was welcomed as his guest to see him perform at the Carlyle anytime, just call and his assistant would take care of it, Wow. Thanks to him I became somewhat of a regular at the upper crust Café (not to mention dinner and drinks were taken care of). Short was an outrageous performer and great human being with a good sense of humor. Sometimes I use his favorite phrase “Big Deal.” Although I mentioned he would always be credited, he assured me it was all right to adopt it as my own but my giving him credit just contributes to keeping his extraordinary memory alive.


Carnegie Hall is where my roommate and I saw Dizzy Gillespie performing while we sat in seats near the roof (“nosebleed seats”); they couldn’t have cost more than five dollars each. The performance was sold out and we had a ball. When Dizzy broke into “Swing Low Sweet Cadillac” we went crazy yelling and jumping up and down, reciting every word. In the fall when we returned to FAMU, sitting in my dormitory room embellishing on our Dizzy concert, the other guys were in awe, “Damn, y’all saw Dizzy in person.” Of course, we said, “We were sitting right down front and Dizzy even gave us the wink.”

Years later it was summer once again at Carnegie Hall and the front was overflowing with people shouting “looking for tickets” and “who’s selling?” The ticket scalpers were having a field day and why not—it was a Miles Davis concert. However, one thing had changed, as a writer the nosebleed seats were out and the good seats were now my only game. Obviously, no one was selling any tickets except for the scalpers, but Miles was worth every penny. Once inside, we were sitting in orchestra about Row M stage left. Concert was to start at 8 p.m.—at 8:15 p.m. no Miles, 8:20 p.m., crowd gets anxious. Shouts and stomps gain momentum, “We want Miles.” The genius trumpeter arrives on stage at 8:35 p.m., dressed in a full length custom patched suede and leather coat and leather pants with trumpet still in case. In his Miles cool demeanor, he steps up to the microphone and in that raspy gravelly voice says, “Damn cabs.” With that said, he proceeded to fold his coat, drop it on stage and open his trumpet case and the show was on!

My second Miles Davis story, also at Carnegie Hall: Miles is on time, no worries. He is playing with a quintet perhaps, I can’t remember the personnel. At any rate, after the first tune, we see Miles move to the back of the stage; he kneels down and begins writing something on these huge white placards. What the hell is he writing so diligently? Eventually, he comes center stage with the large placard over his head with a title on it. He says in that distinctive voice, “People say I never introduce my tunes.” To me that was hilarious and demonstrated the quick wit and sharp sense of humor substantiated by various musicians.

Carnegie Hall, what great memories. As I walked up closer to press my nose against the glass doors and peer inside through the dark stillness, I could see spirits of Carnegie Hall past scurrying to their seats, talking briefly to ushers as they took programs, and patrons waiting anxiously on a long will-call line for their tickets.

My mother always told me patience was a virtue but this is ridiculous. I am ready to escape the haunting Butler Novels and get back to the New York City we all know. The city that never sleeps. The city so nice, they named it twice. But as my Jamaican brothers and sisters say, “Soon come.”