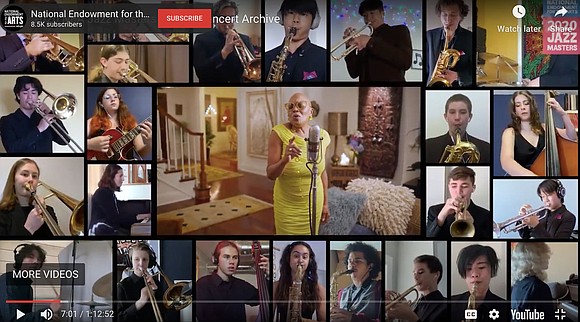 This year’s 2020 NEA Jazz Masters Tribute Concert and presentation took a detour from its usual presentation due to the COVID-19 virus. In an ironic twist this was a blessing for jazz fans. The annual NEA Jazz Masters presentation is usually not televised, but this year thousands of people worldwide were able to enjoy the live-stream from the comfort of their homes. For the second consecutive year the San Francisco Jazz cultural center (SFJAZZ) hosted the event. Unfortunately, the founder of SFJazz Robert Kline sat on the organization’s empty mainstage while a set of drums and piano looked on with sadness as he introduced the prominent singer and 2017 NEA Jazz Master Dee Dee Bridgewater, who hosted the event from her beautiful home in New Orleans.

Bridgewater, wearing a fabulous lime colored dress with matching necklace and her signature large color framed (white) glasses, opened the show with an energetic up-tempo tune “I Love Being Here With You,” accompanied by the SF High School Masters All-Star Jazz Band, each member playing from their own home.

During her acceptance speech Dorthaan Kirk, a native of Texas, who started at jazz radio WBGO in its embryonic stage, noted, “‘Bright Moments’ is finding out you are the recipient of the NEA Jazz Masters award.” “Bright Moments” is a popular song composed by her late husband, the saxophonist/multi-instrumentalist and composer Rashaan Roland Kirk. In his honor the house band performed a medley of Kirk’s music including “Dorthaan’s Walk.” Dorthaan stated, “My most favorite project was the Children’s Concert series that I produced for 25 years at WBGO, which was my second home.” Known as “Newark’s First Lady of jazz,” she thanked Steve Robinson, who recommended her to the founder of WBGO Bob Ottenhoff and the rest became history. She recently retired from the radio station after 39 years. Prior to the coronavirus she continues to produce Bethany Baptist Church’s Jazz Vespers in Newark, New Jersey (in its 20th year).

The bassist Reggie Workman, a native of Philadelphia, has the distinction of playing with such musicians as John and Alice Coltrane, Oliver Lake, Herbie Mann and Thelonious Monk. During a recorded interview Workman mentioned a conversation with John Coltrane when he asked him how to approach a certain tune. Coltrane responded, “I am having a hard enough time playing this sax, you figure it out.” During his acceptance speech Workman noted, “Education is my second name; I have been ordained to give back this great music that was given to me.”

Roscoe Mitchell is sometimes known as the scientist of sound because of his willingness to play anything from a bicycle horn to whistles. He was the founder of the Art Ensemble of Chicago and a member of Association for the Advancement of Creative Musicians (AACM). “I am honored to receive this award. My father told me I can be whatever I want to be if I want it bad enough,” Mitchell stated during his acceptance speech.

Bobby McFerrin is more than just a vocalist when it comes to voice, he is a vocal innovator. The 10-time Grammy Award winner has conducted at the Philharmonic and says, “I perform the healing bond of music.” His acceptance speech was given in song and vocal tones from Bach to James Brown, Leonard Bernstein and “every sound I have heard or imagined,” as he offered an example of each tone. Bridgewater closed the concert with a spirited version of “Lift Every Voice and Sing.”

The vocalist, guitarist and composer Allan Harris is performing from his Harlem brownstone two live-streams per week on Tuesdays at 7:30 p.m. and Saturday afternoons at 2 p.m. “The hours work around the European audience so it’s not too late in the evening for them. Since starting the streaming we have viewers from Turkey, Japan, Australia and Europe and nationally from Florida to California,” says Harris. “It does sound like a lot of shows and I don’t want to burn out my audience, but the repertoire is changed each week along with song themes. This week is protest songs. What I like most about Saturday’s is our chatline is open and I have a chance to converse with the audience in a Q & A,” says Harris. “I want the streams to be like a fireside talk where we can exchange ideas through the music and become a part of each other’s world.” Harris has a repertoire that ranges from country western to blues, jazz, junk box blues, and the American Songbook. Tune into the shows on Facebook.com/theallanharrisband.

In the midst of the resurging civil rights upheaval in response to the police murder of George Floyd, Harris wrote a song entitled “Run Through America” to be released on Aug. 27. Like the protesters in the street, the song’s lyrics take off in outrage: “Tired of singing/Tired of praying/It’s hard to believe you never felt our pain/Take it to the streets and shout out their names.” The lyrics are hard-hittin’ and are explicit of how Blacks feel outraged that police killings continue. This song should become another anthem for how people of color and all human beings who believe in human and civil rights should feel. “This is a protest song I wrote in support of the Black Lives Matter movement; ‘Run Through America’ is an anthem for social change and a call to action directly inspired by the recent slayings of George Floyd, Breonna Taylor and Ahmaud Arbery and so many others,” said Harris.” The single, “Run Through America,” is available for pre-order.