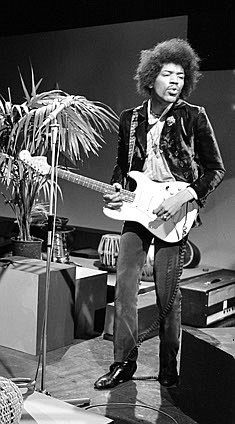 It is hard to believe that Sept. 18, 2020 will mark 50 years that Jimi Hendrix’s physical essence was extinguished from this planet. It is hard to believe because his presence continued to outlive his physical form. We have had movies, posthumous musical releases, tributes and covers by various artists, and so many other avenues in which to keep him before the public’s eye.

Although he died in London and was born in Seattle, Jimi Hendrix considered New York City his American home and base of operations. He owned many properties in the city, including the world-renowned Electric Lady Studios. We also know of the story of how he was discovered in the Greenwich Village before his explosion in Europe. But, to get to the heart of Jimi’s love for New York City, we have to start from the beginning, Harlem.

Harlem in the 1960s was still a powerful epicenter for Black artists long after the Harlem Renaissance. Many musicians would hover around hoping to catch a glimpse of their favorite groups at the Apollo or see them at many of the afterhours spots like Small’s Paradise. No matter how big or how small you were on the R&B scene, you had to come through Harlem to make your bones.

Jimi was no different. He had just left the Nashville area with hopes and dreams of making it big in the Big Apple. He quickly attached himself to lifelong friends that would shape his life before and after his fame. Fayne Pridgeon and the Allen (Aleem) Twins were considered early Harlem friends and confidants. Many of Jimi’s Harlem friends are still around today and continue to enlighten us with nuggets of truth concerning his time there. For example, King George Clemons, currently living in Sweden, used to live next to Jimi in Harlem. He was able to share one of the many poignant conversations he had with Jimi: “When Jimi stayed at my apartment in Harlem, we would always talk about music. I remember one time he said to me, ‘If I had your voice, I wouldn’t need a guitar,’ and I said to him, ‘With your guitar playing skills, I wouldn’t need a voice.’”

It is important that we listen closely to those friends who knew Jimi well in Harlem , because a sinister narrative has been woven which depicts Harlem as a source of frustration and a place of ridicule for Jimi. Selective incidents have been magnified to stereotype Harlem as non-progressive, as far as Jimi’s eclectic tastes in music go. When Jimi’s Harlem friends told these stories, it was not to down Harlem, but rather to explain how Jimi’s creativity and curiosity had no boundaries.

Truth be told, Jimi has always had love for Harlem and Harlem has always had love for Jimi. Although it was not publicized, Jimi would always hang out with his friends in Harlem and even pop in unannounced and play small clubs in Harlem. Even Jimi’s biggest event in Harlem, his September 5, 1969 free concert for the United Block Association, is often marginalized and downplayed as a failure, where people threw objects at the band (Gypsy, Sun, and Rainbows). One of Jimi’s friends and organizers of that Harlem concert was able to fill me in on his motivations for wanting to do a free concert on 139th St/Lenox Ave: “Jimi decided to conduct this concert in Harlem after performing in front of a worldwide audience at the historic Woodstock Musical Festival in upstate New York the previous month. He did so in order to give back to the African American community he made his home for several years. Jimi said to Tunde Ra and me; ‘Let’s do this show for free, I wanna make sure some young boy or girl out there gets the music.’ So, we made it happen.”

Although we don’t have substantial video footage, several photographers like Grant Harper Reid were on hand to document that historic night. Those pictures show a sea of melanin. People of all ages were in attendance and had smiles on their faces. When you talk to the people that were there, they recall a festive atmosphere. Sure, Jimi and the band had a rough start, but they won the crowd over eventually. Another one of Jimi’s friends from Harlem, Jimmi Mayes, who also played drums on a few of Jimi’s songs, had this to say about the Harlem concert:

So, when put in its proper context, Harlem is just as important to Jimi’s development as an artist and human being as any other place that he has lived. He was able to take in the rich cultural history of Harlem, as it groomed and nourished his early musical and social development. He was able to connect with legends like The Isley Brothers and Little Richard. He even won first place in an Apollo amateur night contest. Jimi’s influence continues to reverberate through the Harlem streets, as the next generation of talent takes cues from him. One such player is Ali Bishop, Harlemite and front man/guitarist for the group Sound Frontier. He expressed what Harlem meant to Jimi: “Harlem was important in Jimi’s development. It was in Harlem that Jimi began his journey in New York. Jimi played the Village, then he came back to Harlem. It was his base. As a Harlem resident I’ve been able to speak to Harlemites that played with him and have seen places he played in. Harlem was Jimi’s hub, and it allowed him to get noticed and discovered in New York, igniting his legendary career.”

I take very seriously the idea of Black people being able to tell their own stories. It is easy to put a negative spin on something that you either don’t understand or don’t think highly of. That’s why I have dedicated the last two decades to documenting Jimi’s impact on Black music and Black culture. I have been able to unpack many of the misconceptions about Jimi’s Black legacy that have been distorted and manipulated over the years. Many of these exaggerations, oversimplifications, distortions, inaccuracies, and outright lies may seem minor but, over time, they have done major damage to Jimi’s image in the Black community. So, on the cusp of Jimi’s 50th year memorial celebration, let’s remember him as he truly was, Harlem’s adopted son that never forgot the love Harlem showed him.   Corey Washington is the author of Jimi Hendrix Black Legacy and Nobody Cages Me.  www.jimibl.com