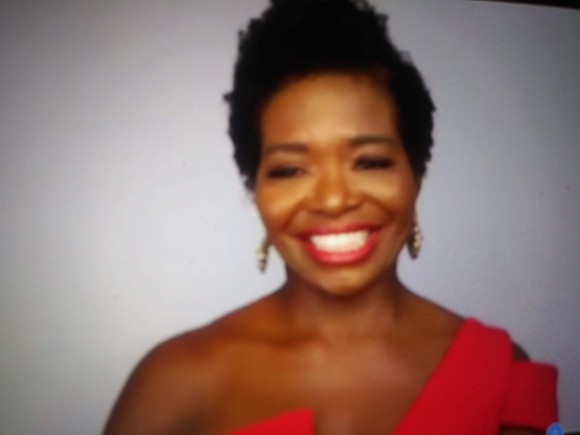 I love Black Theater with all my heart and I love my job of covering theater, always letting the public know what great work our people are doing, telling our stories and encouraging people to support our people on stage. Of course, COVID-19 bought all theater to a halt in March, but prior to that the 2019-2020 season had provided brilliant, thought-provoking, passionate, engaging productions and at the 48th annual AUDELCO Awards held virtually on Monday, Nov. 30 on Zoom, YouTube and Facebook, African Americans got to feel that sense of pride, love, support and community that occurs when we all come together to acknowledge the talent and brilliance of our people. It was a stunningly beautiful evening which contained Black love, Black pride, Black power, and Black passion and compassion.

The evening was co-hosted by Tony Award winner LaChanze and playwright/actor Roger Guenveur Smith. The chemistry between these two was palpable. LaChanze bought natural, stunning beauty and elegance and Smith bought his always-handsome looks, along with a great deal of compassion and charm. Their collaboration made the awards filled consistently with an overwhelming feeling of heart and soul!

This was AUDELCO’s first time as a virtual event and it was an evening of splendor thanks to production stage manager Norman Anthony Small. The event epitomized AUDELCO’s theme—“Black Theater Matters.” The program crafted by AUDELCO President Jackie Jeffries and Rome Neal was done to perfection with the engaging mix of awards in the 21 categories sprinkled throughout an evening of heartfelt, powerful performances by stage royalty including Alyson Williams, Vinie Burrows, and Andre De Shields singing, Sonia Sanchez dramatically reading a poem from “Sweet Honey In The Rock” and newer faces like Anthony Wayne who sang “You Are My Friend,” David Roberts aka D-Black, who stirringly performed a monologue called “Black Epiphany” and this year’s four AUDELCO Rising Star dancers from the Denzel Washington Performing Arts School—Kendall McDowell, Kimberly Robinson, Aaliyah Harrigan and Brielle Henderson—dancing to “Four Women,” music by Nina Simone, choreography by Monica Johnson.

The evening began with an absolutely powerful and stirring opening prayer from A. Curtis Farrow, which was followed up by a slide show consisting of scene and cast shots from various AUDELCO nominated productions, performers from the season, the honorees for this year and past AUDELCO winners including Ebony JoAnn and Ruben Santiago-Hudson. As the pictures flashed the Martha Redbone song, “I Found God In Myself” from “For Colored Girls…” played. LaChanze and Smith then spoke of the difficult year 2020 has been, but shared their excitement about this evening of celebration of Black Theater. It was a night of honoring our people with awards to our theater gold including Robert Hooks and Vinie Burrows who received the Legacy Awards, Voza Rivers and Andre De Shields who received the Lifetime Achievement Award, Oz Scott and Vivian Reed who were recipients of the Pioneer Award, Blair Underwood and Tina Fabrique who received Outstanding Achievement Awards and a Special Achievement Award went to Kara Young. Everyone who was honored spoke from the heart about the humbling experience it was and how important this honor was because it came from their own people.

Andre De Shields was the magnificent, shining star he always is and shared a tremendous performance of “If You Believe” from “The Wiz,” acapella of course! I loved how for people like Vinie Burrows, there was vintage video footage of performances that dated decades ago. Robert Hooks, founder of the Negro Ensemble Company, film actor and so much more, was presented with his award by Woodie King Jr., founder of New Federal Theatre and his friend and colleague for 55 years. Director Petronia Paley presented the Legacy Award to Vinie Burrows and Burrows wowed everyone as she read with passion and conviction “For My People” by Margaret Walker. Burrows shared that she was proud to be a part of the evening and wished AUDELCO 48 more years. Alyson Williams presented Tina Fabrique with her Outstanding Achievement Award. Fabrique remarked, “I’m thrilled, honored and humbled. What an inspiration to be recognized for your life’s work by an organization that recognizes Black Theater excellence. Ty Jones, founder of Classical Theatre of Harlem presented the Outstanding Achievement Award to a man who has been known for his Broadway performances in nontraditional roles in production like “A Streetcar Named Desire,” or “A Trip To Bountiful” in addition to his television series and movies––Blair Underwood. Underwood said, “It’s an honor to be here tonight and share this Zoom. I’m filled with humility and gratitude. I’m grateful for the VIV Awards to do what you do to acknowledge the heritage of our culture. Thank you for developing a plan to salute Black Theater excellence.”

Tony Award winner Trezana Beverly presented the Pioneer Award to the man who directed her in her Tony Award winning role as The Lady In Red in “For Colored Girls Who Have Considered Suicide When The Rainbow is Enuf.” I absolutely love how all the presented had histories with the people they were presenting the award to. Oz Scott spoke of how he and Trezana worked on developing her character and how she took it to the next level. He also spoke of how he would take off July from his Hollywood film career to work in theater. “Plays kept me in tune, my mind sharp. It’s about you as a creative, you as a voice.”

LaChanze presented the Pioneer Award to Vivian Reed. Reed humbly stated, “This award means so much because it’s coming from our people. I truly appreciate this award.” Poetic treasure, Sonia Sanchez after encouraging people to return to the fight with a “Sweet Honey In The Rock” reading, presented the Lifetime Achievement Award to Voza Rivers, New Heritage Theater founder. Rivers recalled, “It was 1973 when I went to my first AUDELCOs. This has been an extraordinary journey for me. This is our 56th year and the Harlem community has put its arms around us and said theater well done. I want to thank my mentor Roger Furman. This evening is an affirmation.” A filmed interview with Andre De Shields in his dressing room gives him a chance to tell his stage story assisted by video footage of past performances during his 50-year career. It was a delight to watch, especially to see that his energy is at the same level today. De Shields remarked, “I want to express my gratitude with a song from The Wiz, ‘If You Believe’.” He delicately sang it with incredible heart, soul and enthusiasm. Anthony Wayne then sang to his friend, “You Are My Friend.” That is a sentiment that I know countless people feel about Andre, including me.

Kara Young, received the Special Achievement Award and stated, “Recognized by your own people. I have an overwhelming amount of joy to be recognized by a Black Institution. It’s ancestral and it’s larger than words…I’m overwhelmed with AUDELCO’s dedication to Black Theater. Black artists have the power to change the world.”

The production that received the most VIV Awards for 2020 hailed from the Billie Holiday Theatre in Brooklyn under Artistic Director Dr. Indira Etwaroo. “Reparations” won six AUDELCO awards for best play; director of a play—Michele Shay; lead actor in a play—Kamal Bolden; featured actress in a play—Lisa Arrindell; sound design—David D. Wright; and set design—Isabel Curley-Clay and Moriah Curley-Clay. Dr. Etwaroo commented, “2020 taught us African American stories have to sit at the center. This story centered a Black male in the ‘Me Too’ movement. We’re at a moment where we can’t go back to the old. I thank the AUDELCO committee for having our back for 48 years.”

The musical “The Dark Star from Harlem: The Spectacular Rise of Josephine Baker” from Glynn Borders productions/LaMama ETC received five VIVs for best musical, director of a musical—Tai Thompson; outstanding musical director—Mario E. Sprouse; lead actress in a musical—Iris Beaumier; and featured actor in a musical—James A. Pierce.

“For Colored Girls Who Have Considered Suicide/When The Rainbow Is Enuf” presented by The Public Theater won three VIV Awards for best revival of a play; musical composer—Martha Redbone and costume design—Toni-Leslie James.

“One in Two” from the New Group, which played at the Signature Theatre won two very well-deserved VIV Awards for playwright––Donja R. Love and outstanding ensemble––Jamyl Dobson, Leland Fowler and Edward Mawere. Love explained, “These three actors had to play 15 different characters and the audience decided every performance which characters they would be…Thank you all so very much. This means the world to me. I want to thank the New Group, my director (Stevie Walker-Webb) and my fierce actors and everybody who felt seen in the play, which was about Black men with HIV.”

“Leaving The Blues” presented by TOSOS (The Other Side of Silence) received two VIV Awards for lead actress in a play—Rosalind Brown and featured actor in a play—Benjamin Mapp.

“The New Englanders” presented by Manhattan Theatre Club received two VIVs for tying in the category of lead actor in a play—Teagle F. Bougere and lighting design for Alan C. Edwards.

“The Wrong Man” presented by MCC Theater received the VIV for lead actor in a musical—Joshua Henry.

“Halfway Bitches Go Straight To Heaven” received one VIV when it tied for lead actress in a play for Liz Colon-Zayas.

“a photograph/lovers in motion” from the Negro Ensemble Company received the VIV for choreography for Leslie Dockery.

The evening was one I don’t think anyone will soon forget! It was an evening of inspiring, hope, comfort and faith—faith in our future and what we can create in that future. The awards ended on a lovely thought as Smith shared, “Hopefully we’ve inspired the next generation. Maybe if a little boy or girl got a glimpse of what happened tonight we can join together.” I love the look forward. Black Theater is something that must last and it will, as will the AUDELCOs continue to recognize and honor it. BRAVO to all those who worked so hard to make the evening so memorable. One of the many beautiful moments of the evening also included The Final Curtain call where photos of those we have lost this year were flashed. AUDELCO was absolutely a program well done and done with love. Congratulations to Jackie Jeffries, AUDELCO President and members of the board of directors. God continue to Bless Black Theater and God Bless the AUDELCOs! Go to the website and find out how to join this incredible organization that is there to reward us! If you didn’t see the AUDELCOs it can be viewed on YouTube.