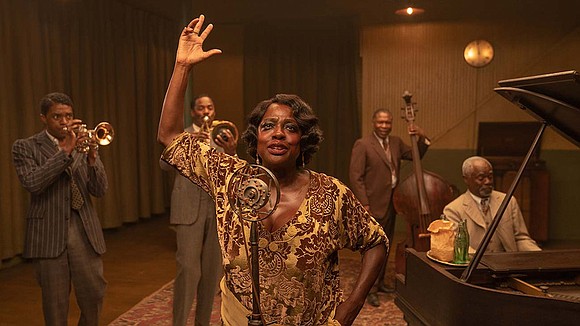 There is no doubt in my mind that “Ma Rainey’s Black Bottom” is a serious Oscar contender. This dynamic film is directed by George C. Wolfe from a screenplay by Ruben Santiago-Hudson, and is based on the play written by August Wilson which is one of 10 plays that comprise Wilson’s epic cycle depicting 100 years of African American experience. Wolfe and company transport the viewer straight into the world of the “Mother of the Blues”—a formidable and deeply pained Ma Rainey.

“Ma Rainey’s Black Bottom” also marks the final role of “Black Panther” star Chadwick Boseman, who passed away unexpectedly. He stars opposite Viola Davis with the bulk of the story centered around a tense recording session with the Ma, aka “Mother of the Blues” in jazz-age Chicago.

Make no mistake, Oscar-winner Davis fills the screen as Ma Rainey giving life to a complicated, proud, and immensely talented legend in the early 20th century. Ma sings the blues because she understands the blues.

But it’s Boseman as an ambitious trumpeter mistreated by the white recording industry who delivers the most layered performance. The late actor leaves you breathless.

Wolfe assembled a flawless cast, providing a powerful reflection on the toll it has taken for African Americans in their struggle for justice and dignity hitting raw nerves of inequality that continue to resonate today. I can almost hear Ma singing a new blues song, something that centers on the fact that the more things change, the more they stay the same.

Netflix gave the film a limited theatrical release (Nov. 25 ) to qualify for an Oscar nomination. It will debut on the platform Dec. 18.

The film was shot by Tobias A. Schliessler. We first get a glimpse of Ma in a tight shot. Her eyes, filled with wisdom, weighed down by large, false eyelashes and smeared mascara. Her smile revealing a mouthful of crooked gold teeth. It’s in rural Georgia, in a tent show, making the crowd go wild that we first see, and understand, why she’s so popular. Her lyrics underscoring a montage of newspaper headlines promising jobs in the North — which started the

Black Migration from the brutal South.

The song moves into a large, urban city theater stage in the North, where Ma electrifies the stage but here, she is backed by a chorus of sexy, female dancers. In the wings, we see Ma’s young girlfriend Dussie Mae (Taylour Paige) dancing and exchanging flirty glances with horn player Levee (Boseman), a dangerous act of defiance that doesn't escape the attention of bandleader and trombone player Cutler (Colman Domingo). When Levee boldly steps forward for his brilliant trumpet solo, Ma cuts him short, snatching the literal spotlight back on herself. Translation, there’s only room for one star in this band.

It’s as you expect; Davis holds nothing back embodying a character nothing like she played in Denzel Washington’s 2016 film of Wilson’s “Fences,” which won her an Oscar.

Here she created a Ma Rainey fiercely defiant about her sexuality and comfortable with her size (large) and her tastes—loud and extravagant.

Ma also takes great pride in her status, making it clear that she’s earned being called the “Mother of the Blues” and unafraid of other women trying to get their piece of the pie.

Everything about her is a swagger even when she’s standing still.

She harbors no illusions about why white producers like her—they see money and she knows that they only care about what her voice can do to line their pockets.

Under Wolfe’s direction, other actors shine, understanding the ensemble nature of Wilson’s language and his ability to turn the everyman’s observations and pondering into poetry.

In act one we understand the power Ma holds with these white music men. Her diva reputation strikes fear into the record company owner Sturdyvant (Jonny Coyne) who nervously anticipates trouble even before she and her band show up, late, for a Chicago recording session. It’s summer and the fans are scarce inside, making her manager Irvin (Jeremy Shamos) sweat even more as he nervously reassures the owner that it’s under control.

A man who plays by Ma’s rules, Cutler arrives on time with bass player Slow Drag (Michael Potts) and pianist Toledo (Glynn Turman). As they set up in the basement rehearsal room Levee, who moves to his own music, en route spends $11 on a new pair of shoes.

The tense movements begin over the song list and are followed by Ma’s insistence that her nephew record the spoken word intro to the song despite his horrible stutter. Now, back to the song list, there’s a standoff over Irvin’s wish to use Levee’s dance arrangement, which Ma will not approve. She threatens to leave. Here’s the thing, Ma understands old-man time. Meaning, time waits for no one. Everything is fleeting and she understands, in her bones, that white people don’t understand us and they don’t understand the blues. This is set in the ’20s and the blues were not a musical genre.

“They hear it come out, but they don’t know how it got there. They don’t understand that’s life’s way of talking. You don’t sing to feel better. You sing ‘cause that’s a way of understanding life.”

The band’s banter in the rehearsal room is about racism, identity, the struggle of our people, and finally of having ambition, here artistic ability, but like all of Wilson’s work the metaphors are clear.

Each character has their moment of revelation, but it’s Levee’s declaration that he won’t be the victim of systemic racism, and that he knows how to handle white people, that makes him the most tragic. He reveals a painful memory that happened when he was eight years old, and by the time he’s done, when his dreams are blown to pieces, we feel the pain deeper.

Exploration of America and this so-called American Dream is shared by the majority of Wilson’s characters in one way or another. Ma is a success. Ma is a legend but she is also a woman exhausted down to her bones and right through to her very soul.

Denzel Washington serves as lead producer and has publicly expressed his intention of bringing to the screen all 10 plays in Wilson’s Century Cycle. “Ma Rainey’s Black Bottom” is the second; eight more to go.