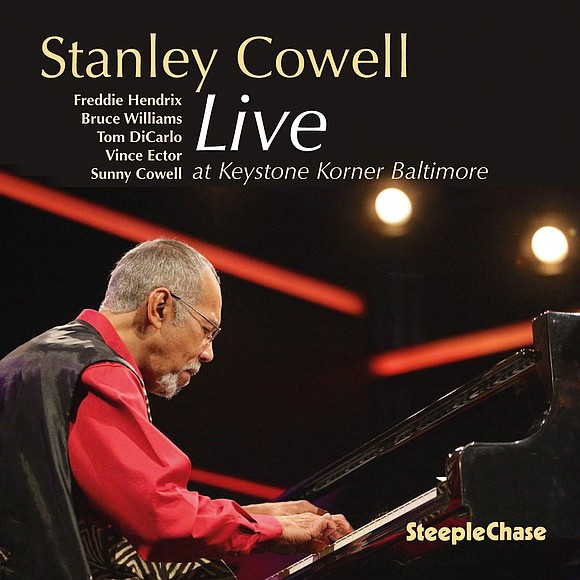 Stanley Cowell, an adaptive innovator pianist, composer and educator, who created his own destiny in music as well as in business as the co-founder of Strata-East Records, died Dec. 17 at Bayhealth Hospital in Dover, Delaware. He was 79.

His death was confirmed by trumpeter Charles Tolliver, who was Cowell’s business associate in their founding of Strata-East and closest friend for over 50 years. The cause of death was hypovolemic shock.

Cowell’s last performance was in October at the Keystone Korner jazz club in Baltimore, the only jazz club in the country permitting 25% live audiences indoors during this COVID-19 pandemic. The performance was a live recording date that garnered the 2020 release of “Live at Keystone Korner Baltimore” (Steeple Chase Records), which features trumpeter Freddie Hendrix on trumpet and saxophonist Bruce Williams, and his daughter Sunny on vocals.

“As a composer and player Stanley Cowell was one of the great voices of jazz piano. He had a unique compelling expression in his playing and composing,” stated Todd Barkan, owner of Keystone Korner. “His composition ‘Equipoise’ captures the essence of his compositions and playing style. I enjoyed working with him for over 50 years as an artist and friend.”

While Cowell was not a household name, he was acknowledged by his fans, fellow musicians and accolades for many albums and compositions. He had many recordings as a leader and appeared on recordings and in performance with a score of major jazz artists. With his musical introspection Cowell could move from a swinging stride piano to avant garde to classical music. It was his innovative versatility that gave him such flexible mobility. He often performed well-travelled standards and jazz classics to his own restructuring that was welcomed by his audiences.

Once he arrived in New York in 1966, he began working with avant garde alto saxophonist Marion Brown and multi-instrumentalist Rahsaan Roland Kirk. During that stint he met drummer Rashied Ali and accompanied him on his debut gig at Slugs’ jazz club in May 1967. That performance led to a three-year stint with Max Roach’s quintet. He later said that period was “the beginning of everything.” Cowell wrote several tunes, “Equipoise” and “Effi” for Roach’s most memorable 1968 album, “Members, Don’t Git Weary” (Atlantic Records).

His experience with Roach led to a tour with Miles Davis, and joining the bands of Bobby Hutcherson, Harold Land and Stan Getz. His reputation with Roach offered him the opportunity to make his debut recording, “Blues for the Viet Cong” (1969 Polydor). His awareness as a Black musician in America was at the forefront of his music, social issues, Black history and the spirit of Black pride. His 2015 album, “Juneteenth,” was original compositions for solo piano inspired by the civil rights and Black Power movements. The album, like Herbie Hancock’s “The Prisoner,” was underrated although the music was great and the inspired message was an essential part of the times. Cowell was upset that despite the history of Juneteenth, the American record labels passed on the project; it was eventually picked up by a small French record label.

Cowell worked with the Collective Black Artists Inc., in 1970. It was an effort to give jazz musicians greater control over their recordings, compositions, performance venues and other Black issues that included Black artists and poets. It was these concepts in 1971 along with other issues that led Cowell to join forces with trumpeter Charles Tolliver (a longtime musical collaborator, member of Roach’s quintet where they first met) to start Strata-East Records in Brooklyn. The independent, artist-owned record label was a revolutionary move at the time that still serves as a blueprint for musicians to follow. The label became a major force in the industry releasing a treasure chest of impressive recordings throughout the 1970s. Cowell released two Piano Choir albums, with seven pianos, an idea that was inspired by James Reese Europe, who was said to have used 14 pianos. Aside from his 1974 solo recordings like “Musa: Ancestral Streams,” Cowell also collaborated with Tolliver and saxophonist Clifford Jordan on other albums for the label.

After the Strata-East label, Cowell took to the road touring regularly with the Heath Brothers or Roy Haynes. He was a catalyst in both bands with the ability to take the bands into deeper waters from tradition to bebop.

In 1981, Cowell became a full-time faculty member at City University of New York’s Lehman College. The position became his primary focus where he remained for 19 years. In the late ’80s he moved his family to Prince George’s County, Maryland. In 2000, he began a new tenure at the Music Department of the Mason Gross School of the Arts at Rutgers University in New Jersey, remaining there until his retirement in 2013. While there he wrote his composition “The Asian Art Suite” that premiered in 2011. He was also part of a regular quartet led by J.J. Johnson. After retiring from Rutgers in 2013, Cowell returned to the bandstand performing a week-long engagement at New York’s storied Village vanguard in 2015.

Stanley Allen Cowell was born in Toledo, Ohio, on May 5, 1941, to Stanley Cowell and Willie Hazel (Lytle) Cowell. The couple owned a motel that was one of the few places in Toledo where traveling Blacks could stay. Art Tatum, a Toledo native, was a friend of the family and the pianist became a major influence in Cowell’s life, at the age of 6, when he played a version of the show tune “You Took Advantage of Me” that Cowell would never forget. Cowell began playing the piano at age 4.

Composing constantly as a child, by the time he became a student at the Oberlin College Conservatory in Ohio at age 17, he had already written a number of tunes, including “Departure,” which would become the opening track on “Blues for the Viet Cong.” He later received a graduate degree in classical piano from the University of Michigan in Ann Arbor. At the time he was also working six nights a week in a jazz trio.

“If ever there were two people on this planet who were twins and alter-ego matched it was Stanley and I,” said Tolliver. “From our first meeting at the first rehearsal after being summoned by Max Roach to join his new quintet in 1967, there was an unbroken steadfast musical and personal immortal bond. Stanley’s importance as a great artist and my lifelong comrade can best be explained in that scripture-based hymn, ‘[the Lord] God moves in mysterious ways his wonders to perform.’ The wonder of Stanley Cowell will live forever.”

Cowell is survived by his wife of 32 years, the former Sylvia Potts, of Upper Marlboro; their daughter, Sunny Cowell, a musician and lawyer, of Baltimore; a daughter from his first marriage, Sienna Cowell of Chesapeake, Va.; and a sister.