Incredibly, the Giants can still gain a playoff spot 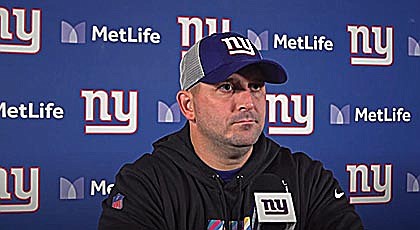 It defies common sports logic that the Giants can still make the playoffs, which they haven’t done in the last three seasons and seven of the past eight. Yet here they are, losers of three straight games entering Week 17, the final week of the regular season, with an unremarkable record—actually a terrible record—of 5-10, with a chance to win the putrid NFC East division, the conference’s No. 4 seed, and play a wild-card game at home.

The Giants will host the 6-9 Dallas Cowboys Sunday afternoon, Jan. 3, at MetLife Stadium (at 1 p.m.). This is the scenario: If the Giants defeat the Cowboys and the Washington Football Team, which is currently in first place at 6-9, lose to the last-place 4-10-1 Philadelphia Eagles on the road Sunday night, the Giants, Washington and Dallas would all end the regular season 6-10.

So, with the second worst scoring offense in the 32-team NFL, averaging just 17.1 points per game, better than only the Jets’ league low 15.3, the Giants would implausibly end their postseason drought. Giants coach Joe Judge said conversations and thoughts about the playoffs are unavoidable.

“To be honest with you, look, the questions about the playoffs, these are things the players obviously have as well. We’re going to keep our focus on Dallas,” said Judge, speaking virtually with the media on Monday, one day after the Giants’ were drubbed by the Ravens in Baltimore 27-13.

“We’re not getting focused on the playoffs. I truly believe what I said earlier, this is a hypothetical game. The only thing we can control is what we do against Dallas.

“At the same time, there’s a human nature that they’re very conscious of what’s going on around the league. It would be naïve or ignorant to pretend that they’re not paying attention as well.”

Giants linebacker Blake Martinez maintained that the team’s record is irrelevant if they can reach the playoffs. “I don’t think the record is the biggest thing to look at. I think you look at the team and how they progressed throughout the season,” said the 26-year-old Martinez, whose 140 tackles rank fourth in the league.