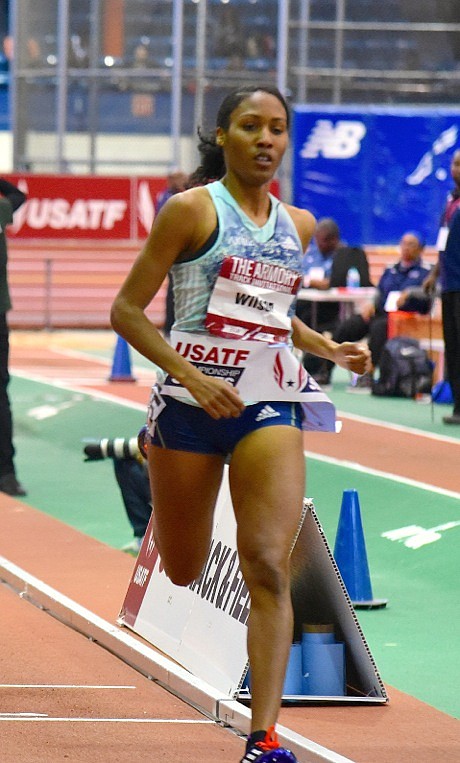 It’s an Olympic year and some of the top names in track and field will be competing at the Millrose Games this Saturday, Feb. 8, at the Armory Track. Among them will be Olympic gold medalist Allyson Felix and world record holder Keni Harrison.

“I’m looking forward to the competition and the awesome atmosphere at the Armory,” said Harrison, who will compete in the 60-meter hurdles. This will be Harrison’s second meet of 2020, but her first Millrose Games. She opened indoor season in Albuquerque, New Mexico with a blazing fast time.

“Doing indoor [season] really helps prepare me for outdoor,” said Harrison. “The faster I get the first five [hurdles], the better my outdoor is going to be. Then, in outdoor all I have to worry about is the last five. So it’s good preparation going into the Olympic year.

“Overall, it’s going to be an exciting year,” she added. “I’m really excited to run some fast times and try to make my first Olympic team.”

New Jersey native Ajeé Wilson has already competed at the Armory Track this year, having posted a win at the Dr. Sander Invitational Columbia Challenge last month. The 800 meters is given a place of prestige in the schedule, in between the NYRR women’s and men’s Wanamaker Miles. Wilson’s been running in this building since she was a kid, and any time there is a great time.

“Millrose is always a super competitive race, so I’m excited to go back and hopefully run really well,” said Wilson. “I’ve been competing there so long, I have my routine. I have my favorite place to sit. I know where my family is going to be. I know where to warm up. I know what stalls in the bathroom are my favorites. It’s definitely a place I’m at home at and super used to after all these years.

“Over the years, the same officials and management are there, so a lot of them have seen me grow up,” she added.

The top sprinters from St. John’s University will take part in the 4x200 relay and the college women’s 4x400. The Armory Track is very familiar to the Red Storm as they train there three times a week during indoor season.

“It’s a really fast track,” said St. John’s sprinter Leah Anderson. “All the greats have run there, so it’s really exhilarating. It’s hard to do bad when a lot is riding on you.”