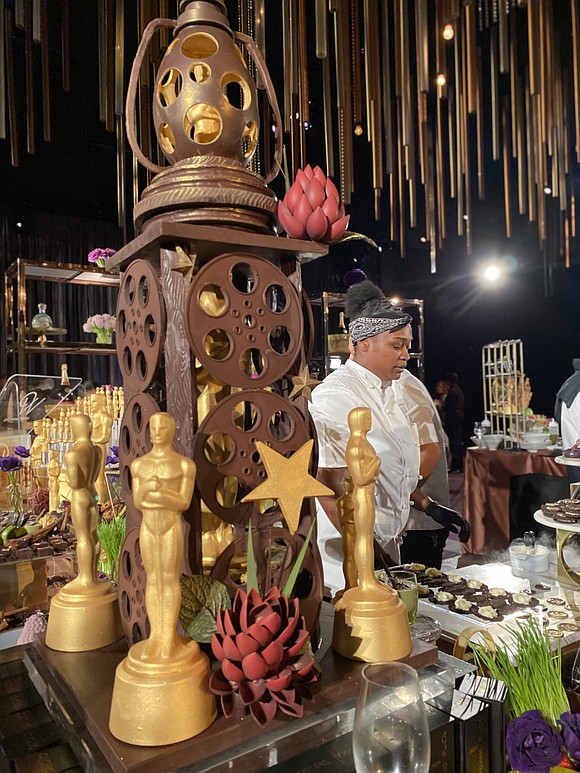 It’s one of the jewels in the crown to be invited and to attend the Governors Ball, the Academy of Motion Picture Arts and Sciences’ official post-Oscars celebration, which will immediately follow the 92nd Oscars ceremony on Sunday, Feb. 9.

Last week, in Los Angeles, we were invited to preview the delicious tasting menu designed by master chef Wolfgang Puck and his incredibly gifted and dedicated team. It takes a village of people to feed the Ball’s 1,500 guests which include Oscar winners and nominees, show presenters and other telecast participants.

Academy governor Lois Burwell and event producer Cheryl Cecchetto worked to create harmony, and relaxation was their mantra in choosing the design for the 92nd Oscars Governors Ball. The color palette will be a soothing mix of copper and bronze metallics with accents of eggplant and amethyst. The ballroom will be lit by 2,000 tubes of light in a spectacular floating chandelier made from recycled materials in varying finishes and textures.

For the third time as the Academy’s Awards and Events Committee chair, Burwell will oversee the décor, menu and entertainment planning of the Ball. An acclaimed makeup artist, she won an Oscar for her work on “Braveheart” and earned a nomination for “Saving Private Ryan.” Her other feature credits include “The Princess Bride,” “War Horse,” “Lincoln” and “Ready Player One.” Burwell, a member of the Academy since 1997, is currently serving her second term as makeup artists and hairstylists branch governor and holds the office of first vice president on the Academy’s Board of Governors. In her 31st year producing the Governors Ball, Cecchetto and her multi-talented team at Sequoia Productions will collaborate with Burwell on every aspect of the production, from concept to design, from on-site construction to day-of execution and management.

In collaboration with a diverse group of designers, technicians, administrators, and managers, the Sequoia team will work on-site and behind the scenes on blending décor, catering, entertainment, staffing, and logistics into a fluid and flawless guest experience. For the 26th consecutive year, legendary chef Wolfgang Puck and the Wolfgang Puck Catering team will set the culinary stage for Hollywood’s biggest night. Puck, vice president of culinary Eric Klein and a kitchen team of 200 will bring a menu of more than 70 imaginative dishes to life with 70% of them being plant-based.

The Governors Ball will take place in the Ray Dolby Ballroom on the top level of the Hollywood & Highland Center immediately following the Oscar telecast.

To learn more and pick up some of the recipes go to our blog AmNews Curtain Raiser http://www.amnewscurtainraiser.com/ and please follow us @ANCurtainRaiser.