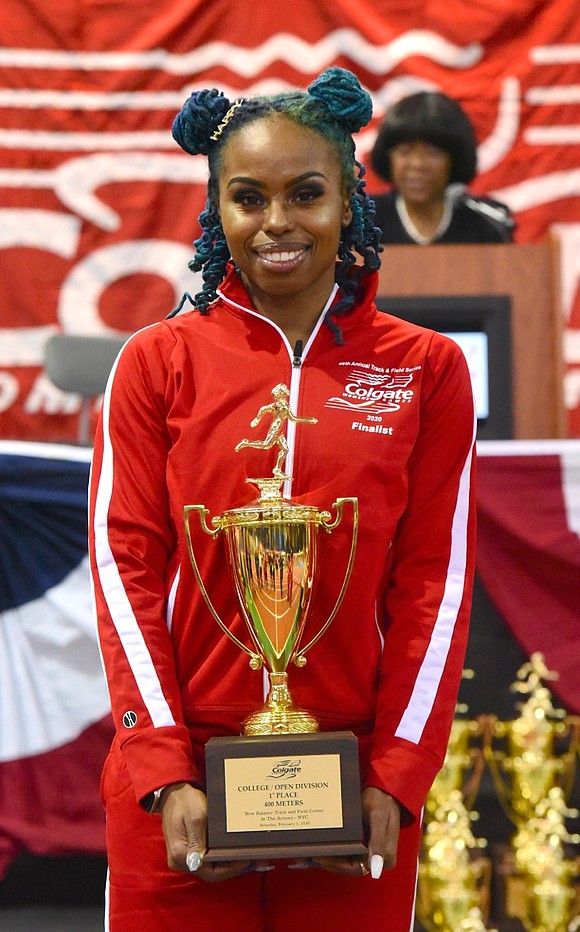 From an initial field of thousands, 230 girls and young women from all over the East Coast persevered through four preliminaries and the semifinals at Pratt Institute in Brooklyn, starting in December to earn their place in the finals of Colgate Women’s Games held at The Armory Track on the Upper West Side of New York City on Saturday.

An exciting midday of track and field competition concluded Colgate’s 46th season. Since 1973 The Colgate Women’s Games have helped to develop and inspire young athletes. To date, the Colgate Women’s Games have produced an astounding number of Olympians, 26, Hall of Fame athletes, and hundreds of national champions from every age and grade division.

“The Colgate Women’s Games provide girls and young women a means to develop self-esteem and a sense of personal achievement through competitive participation in track and field,” notes Meet Director Cheryl Toussaint. “From thousands of first-timers who might not otherwise participate in an organized sport, to the hundreds who have developed into the nation’s top talent.”

In addition to many of Saturday’s champions, awards were also presented to Anissa Moore (Brooklyn, N.Y.) who set a personal record in the High School 400 meters at 56.66. Moore was awarded the Most Improved Competitor, the Fred Thompson Trophy.

Maya Dorer (Brooklyn, N.Y.), Colgate’s Most Promising Newcomer, was given the Donna DaVarona Trophy. Dorer set a personal record in the High School 1500 meters at 4:46.12.

Alanna Woolfolk (Clayton, N.J.) was awarded the Outstanding Competitor at the Preliminaries and Semi-Finals, the Cheryl Toussaint Trophy, and cleared 5-feet-6 in the Mid School high jump.

Dalilah Muhammad, the 400 meter-hurdles world record holder who began participating in the Colgate Women’s Games as an Elementary A competitor, presented trophies and special awards on Saturday. Muhammad, named the USATF 2019 World Athlete of the Year, has since won gold medals at the Olympic Summer Games in Rio and the World Championships in Doha, as well as holding a world record in the 400 meter hurdles (52.16).