GET COUNTED: Black leaders emphasize the importance of filling out the Census 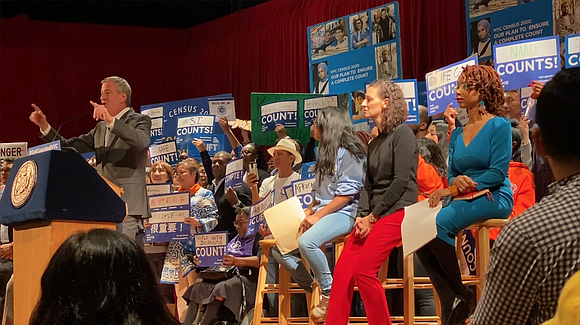 This week, a roundtable discussion with several Black community, faith, and civil rights leaders from across the city convened at City Hall to outline their plan to ensure Black communities are counted in the 2020 Census. They said making sure Black communities participate in the Census is crucial to ensure that hundreds of billions of dollars in federal funds are distributed properly for education, healthcare, housing, jobs, infrastructure and other resources.

Local Black media outlets including the AmNews are also joining the crusade to get the word out about the importance of participating in the Census.

Mailings will be sent to homes about the Census between March 12 and 20 and must be completed by April 1. Everyone living in the United States is being counted regardless of immigration status or citizenship. Response to the U.S. Census is required by law.

Members of the panel recognized the understandable fear many residents have about filling out the government issued Census. Many included reporting immigration status, unlawful residents or even questions about someone’s criminal record. Thompson ensured that information will remain private and will not result in eviction or criminal prosecution.

“Census is high stakes for Afro-descendant communities and immigrant communities,” Thompson said. “Black response rates have been historically low. There is worry about information going to ICE that could jeopardize people’s ability to stay. Lots of people are doubled up in public housing and other apartments across the city and worry that if their information goes to the landlord [or] goes to the housing authority they could lose a place to live.”

The Census will not ask for Social Security numbers, immigration status, financial information, party affiliation or mother’s maiden name. Officials are warning of scams that could phish for information. Any information filled out on the Census is confidential by law and could result in severe penalties if released. Questions about Census fraud should be directed to the bureau by calling 800-923-8282.

Several changes are coming to this year’s Census. For the first time, the Census will be conducted primarily online, however, due to many households lacking internet access, public libraries will provide laptops and tablets that will be made available to community members to complete the Census.

Another notable change is that for the first time, people of African descent will be able to identify according to race, ethnicity and nationality.

“It is fundamentally important that we understand that while we may have our opinions about the word ‘Black,’ in this country, Black is a protected racial category,” said Favors. “There is a fundamental misunderstanding of what the Census is and how it connects to our day-to-day lives.”

Community-based organizations are organizing pop-up centers across the city to assist those with the Census. Computers, tablets, and handheld devices will be available to help New Yorkers complete the Census.

Houses of worship will also host special programming around the Census and have special “Census Sundays” in several locations throughout the city.

“The pop up centers will be housed in our community organizations and in our libraries,” Menin said. “We’re going to have hundreds of pop up centers. We have computer terminals, collateral material about the Census and staff that’s trained in filling out the Census.”

Residents will still be able to fill out the 10-question paper form that will be mailed to homes. In the event the Census gets no response, the Census Bureau will begin its door-knocking Nonresponse Follow-Up Operation (NRFU) around mid-May, which will run through the end of July.

“It is important that everyone regardless of how their household is comprised, gets the Census done,” Daniel said. “All the Census is, is your RSVP for what could be the greatest party in the world, living right here in New York City. It’s simple and it’s free.”

The city has set up a website with information about the Census at www.nyc.gov/Census.