Kyrie’s out again—LeVert steps up in his absence 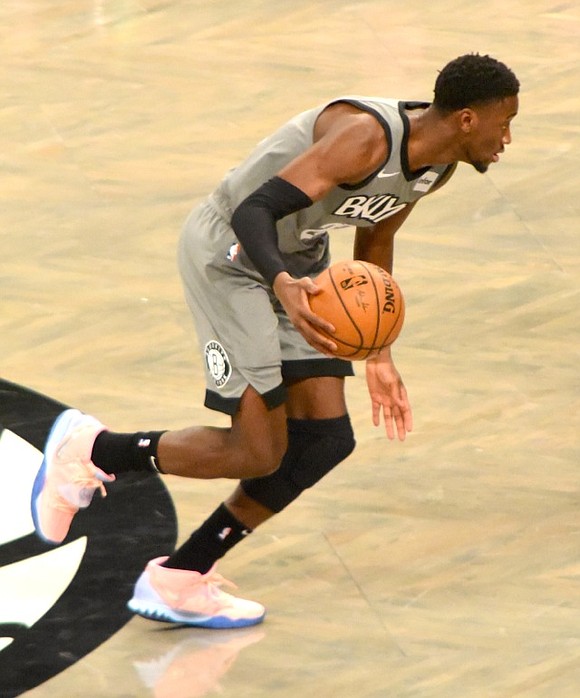 Kyrie Irving is out again. There must be a bible verse or a line from Shakespeare, Oprah or a Tyler Perry comedy or drama that can accompany any media analysis.

With 5:31 remaining on the fourth quarter clock, Irving gets injured, entangled with Bradley Beale going up for a rebound in a road game. The Nets versus the Washington Wizards, a 113-107 loss for Brooklyn, their 27th loss.

This was Irving’s eighth game back after missing two months with a shoulder injury.

Irving’s injury occurred the night after he scored a season-high 54 points on 19 of 23 shooting, 5 assists and 5 rebounds against the Chicago Bulls, a 133-118 Brooklyn home victory. His 54 topped his 50-point game night against the Minnesota Timberwolves at the start of the season.

An MRI concluded that Irving’s injury is a medial ligament sprain. It’ll be re-evaluated again in one week. Irving will play the sideline for now.

With Irving out, Caris LeVert, who’s also coming off of the disabled list, was inserted into Brooklyn’s lineup on Monday against the Phoenix Suns. He’d been coming off of the bench, sparingly since his return. It was a 29-point night, matching his career high.

“It’s definitely good to see the ball going through the basket, be aggressive like I was tonight,” said LeVert, who also had seven assists.

“It was like the old Caris,” said a jubilant Kenny Atkinson, the Nets head coach, impressed with his movement and athleticism looking back on his 32 minutes of play.

Along with LeVert, four of his teammates also scored in double figures: 15 for Taurean Prince, 16 for Joe Harris. Spencer Dinwiddie dropped 14, 13 for Timothe Luwawu-Cabarrot.

Brooklyn, who played the Golden State Warriors last night, Wednesday, Feb. 5, hit the road for a Saturday night game against the Toronto Raptors and a Monday night game in Indiana against the Pacers before closing the season down next Wednesday, Feb. 12, for the NBA All-Star weekend with another game with the Raptors, this time at home in Brooklyn.

Harris and Dinwiddie will represent the Nets in this season’s All-Star festivities. Harris, the 2019 NBA Allstar 3-Point Contest champion, will defend his title during next weekend’s All-Star break.

Dinwiddie, the 2018 Skills Contest champion, will again compete in the contest.