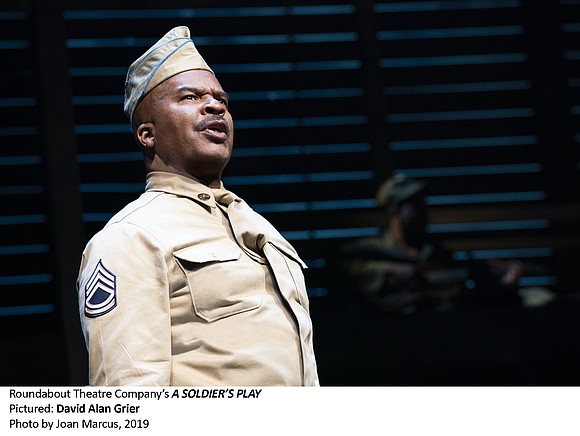 “A Soldier’s Play” is a theatrical masterpiece! It is a master class in what a Broadway play should be. It has an intense, timeless, relevant Pulitzer Prize winning storyline written by Charles Fuller that surprisingly is only now making its Broadway debut. This is thanks to the genius of director Kenny Leon. It has a splendid cast that embodies the important and intense message of the racism faced by Black men in this country—focusing on an army base in Louisiana in 1944, where a Black sergeant was murdered. The show utilizes the men performing blues songs accapella, using just stomping and their bodies as instruments. It starts off with a dark stage and men singing in the darkness, singing the blues and then a drunken Sergeant Waters comes out on an elevated stage, drunk and yelling, only to be shot. From there the drama is real as his murder is meticulously investigated by Captain Davenport.

Fuller created a very complex character in Sergeant Waters, a Black man who hates his own people. He is a Black man who is frustrated about being controlled by white men, but feels that he can’t do anything about that. He hates his own people. Especially those who he feels bring the race down. When he sees Black men in the army that he feels embarrass the race, he viciously goes after them to bring them down. To the men that he commands he is cruel, aggressive and abusive. But, on the other hand, he is a man who loves his children and wants to prepare his son and daughter to do better than he did. He wants to send them to the white schools so they learn how to survive in a white man’s world. In some ways his character is easy to dislike, but in other ways he is a sympathetic figure. David Alan Grier brings his soul to his portrayal of Waters. You feel every emotion the character goes through. From the time that Blair Underwood comes on that stage and introduces himself, you know you are in for a tremendous time! His focus, his instrument, his acting prowess is spot-on. Jerry O’Connell also comes out from the beginning with acting guns blazing. This cast will simply take your breath away. I found myself completely riveted.

Once the mystery of who killed Sergeant Waters is solved, Captain Davenport, who is a very straight-laced, straight-forward captain, bares his soul to the audience. His character has battles throughout the play. He fights to be taken seriously and respected by Captain Taylor, who doesn’t feel that Black men should be officers. And he has the Black soldiers looking at him with pride that he is representing them among this level of officers. By the end however, when he tells the audience what happens to this company of men, he does something that I don’t think most people expect. I’m not going to tell you what it is. Let me just say that his action to me represented the frustration of Black men in this country, both in the 1940s through to today!

Presented by the Roundabout Theatre Company and playing at the American Airlines Theatre at 227 W 42nd Street, this Broadway show should make us all very proud. Technically it was also outstanding as there is set design by Derek McLane, costume design by Dede Ayite, lighting design by Allen Lee Hughes and sound design by Dan Moses Schreier. The play is only running through March 15, so get your tickets at roundabouttheatre.org.