They won it, but it’s taken KC some years to make it there 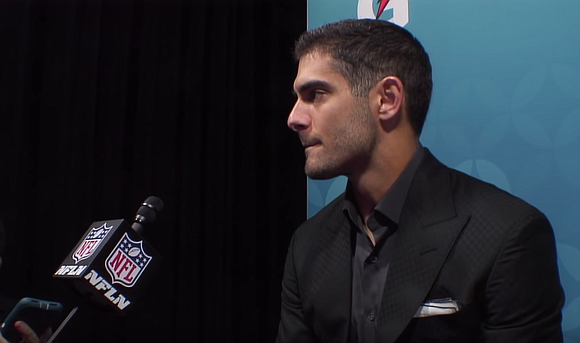 San Francisco 49ers quarterback Jimmy Garoppolo and his teammates bear the heartbreak of 31-20 loss to the Chiefs in Super Bowl LIV.

The irony of KC’s inability to make it to the NFL’s final game of the season is that the team’s founder/owner, Lamar Hunt, who passed away in 2006, is the one who came up with the name, Super Bowl. And, the name of the AFC Championship trophy which a team must win to advance to the Super Bowl bears his name.

The Chiefs, owned by the Hunt family since 1960, originally the Dallas Texans before moving to Kansas City in 1963, came very close to having to wait another season on Sunday after dropping behind the San Francisco 49ers 20 to 10 in the third quarter.

With the game tied 10-10, after J-Lo’s and Shakira’s halftime show, the 49ers dominated KC on both sides of the ball during the third, scoring a field goal and a touchdown, a two possession lead going into the fourth and final quarter of the game.

“No one had their head down. We believed in each other. That’s what we preached all year long.”

Mahomes amazingly led the Chiefs to three touchdowns with less than seven minutes remaining in the game to defeat the 49ers 31-20 to win Super Bowl LIV, the first for the 24-year-old in his third season as a player, and the first as a head coach for Andy Reid, 61, a head coach since 1999, first with the Philadelphia Eagles, now in his seventh year with Kansas City.

Reid also has a Super Bowl ring from 1996 as an assistant coach with the Green Bay Packers. His Eagles team lost in the Super Bowl to the New England Patriots in 2004.

The Chiefs have a great team and a franchise quarterback. They can come back. This could’ve been a repeat year if they hadn’t lost last year’s AFC championship game to the Patriots. Reid is already answering questions about repeating, getting back to America’s biggest game.

“Once you’ve been there and experience it, you want to go back,” he noted. “I was lucky enough when I was younger to coach at Green Bay that went to a couple of these.”

What’s more immediate for Reid and his Chiefs team was yesterday’s parade and celebration. The coach couldn’t wait.

“I know it’s going to be cold and all that, but your juices are going,” explained Reid. “You’re talking over a million people. Schools are closed. Businesses are closed. Let’s go man. Let’s enjoy it. It took us 50 years to get here. Let’s go. Let’s go have a good time.” It took Reid 21. “Let’s enjoy the heck out of it.”