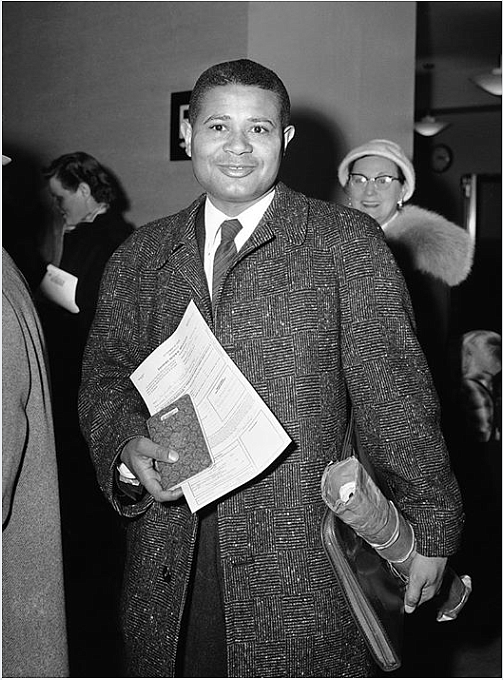 When intrepid activist and journalist William Worthy died six years ago, I promised that one day he would be featured in the Classroom column, and thus it is this week as we witness the global attack on reporters who dare to speak truth to power.

As I reflected on his adventurous life in these pages back then, Worthy not only courageously lifted his voice for the oppressed, he did it no matter where he ventured—China, Cuba, Russia or the four corners of the world. These acts of bravery were particularly remarkable during the ’50s, the neo-fascistic days of the Cold War when anyone defiant enough to stand up to the rapacious governments and bloodthirsty tyrants were targeted for extinction.

Although he was clearly a darling of the Left, he, nonetheless, did not bite his tongue when it came to injustices and reaction perpetrated on the innocent and the oppressed. There are not too many of us left, or Left, who recall when Worthy walked among us, when in 1963 at King Solomon Baptist Church in Detroit he witnessed Malcolm X’s famous “Message to the Grassroots” speech. Being a part of historic events and providing coverage for such papers as Baltimore Afro-American where he worked from 1953 to 1980 were typical worthy moments, so to speak, and infused with the political and cultural prose that characterized his stories.

Among journalists during the period of McCarthy witch hunts and the ravages of the House Un-American Activities Committee, Worthy’s stance was exceptional. He attached his name to many unpopular causes of the day, including the Fair Play for Cuba Committee, which attracted a coterie of notables—James Baldwin, LeRoi Jones (Amiri Baraka), Richard Gibson, Allen Ginsberg, John Henrik Clarke and Robert Williams. Even when Pulitzer Prize-winning author and historian Arthur Schlesinger tried to coax Malcolm X to denounce Worthy, Malcolm resisted, insisting that an article Worthy had written was not an attack on the Nation of Islam but on the negative conditions that gave rise to the Nation. Once, according to historian Gerald Horne in his book “Race Woman, a biography of Shirley Graham Du Bois,” Worthy sought Du Bois’ widow to help him secure an interview with Kwame Nkrumah during his ill-fated journey to Vietnam, but she refused. That he would seek her help and have her refuse him seems out of character for both, though Worthy never let a no stop him.

The prolific Worthy began life July 7, 1921, in Boston, Mass. As a product of a solid Black middle-class family (his father was a noted doctor) much was expected of him, and he got off to a good start as a student at Boston Latin School and later earned a degree from Bates College in Maine in 1942. During World War II, the first signs of the militancy indicative of his life appeared when he refused military service as a conscientious objector––though, according to one obituary, he could have avoided service because of an ulcer and a subsequent 4-F classification.

After a brief tenure as a press aide for A. Philip Randolph, Worthy was hired at the Afro-American and this began his career as a reporter who was not afraid to be less than objective in his coverage and certainly not afraid of venturing where his friends reminded him, “fools rush in where wise men never go.” Worthy was not foolish, just absolutely bold in pushing the journalistic envelope as far as it would go, especially if the mission was abroad and to forbidden territory.

Worthy’s first big interview was with Soviet leader Nikita Khrushchev in 1955, which occurred just before he attained the fellowship at Nieman. The next journey was to China, and there’s a photo of him posing with Premier Chou En-Lai. He was among the first U.S. journalists admitted to China after the U.S. ended relations with China. Worthy spent 41 days in China—about the same amount of time he spent in the Soviet Union. These long stays gave him an opportunity to travel around the countries and to conduct a series of interviews with ordinary citizens and to gather a better understanding of the people and their culture, all of which he shared with readers back in the States.

Among the highlights of his travel to Asia in the ’50s was a trip to a prison in Shanghai where he interviewed American POWs who had been captured during the Korean War. He was the first to disclose the location of these missing POWs.

Upon his return to the U.S. in 1957, he applied for a renewal of his passport but was denied by the State Department on the grounds he had violated certain restrictions. Not having a passport did not stop him from traveling to Cuba four years later where he arrived after debarking from a ship bound from the U.S. to Mexico. His stories painted a vivid picture of life under communism and some of the personal reflections of Pres. Fidel Castro. For this violation, he was arrested when he returned to Florida and thus began his battle in federal court. Despite such a formidable attorney as William Kunstler, Worthy was found guilty and sentenced to three months’ imprisonment and nine months’ probation.

The case went all the way to the Supreme Court and in the process aroused a major protest movement for his release. There was such an outcry that it inspired a folk song written by Phil Ochs that was a bit ambivalent in some of the lyrics that declared: “Five thousand dollars or a five-year sentence may be well/for a man who had the nerve to think that travelin’ is free. Oh, why’d he waste his time to see a dictator’s reign/when he could have seen democracy by travelin’ on to Spain?” While he was eventually allowed entry, his passport was not reinstated until 1968, not that that made any difference to Worthy and his travels. And over the succeeding years he would continue his international contacts, including a visit to Iran in 1979 and his access to documents taken from the U.S. Embassy, which were no more than reprints of intelligence material widely known in Europe. In his later years, Worthy reduced his intrepid travels and took to the classroom where, among other institutions, he taught at Howard University and Boston University. He published “The Rape of Our Neighborhoods,” in 1976. He received the Nieman Foundation’s Louis Lyons Award for Conscience and Integrity in Journalism in 2008.

Worthy died on May 4, 2014 in Brewster, Mass. He was 92 and died from complications of Alzheimer’s disease.