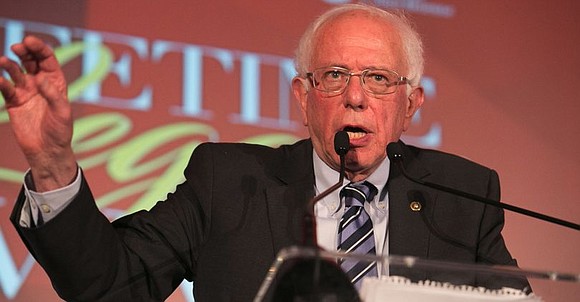 Unlike the fiasco in Iowa, the New Hampshire primary did not have to wait for the results that showed Sen. Bernie Sanders as a victor in the still crowded race. But his seesaw battle with former Mayor Pete Buttigieg continues with Sen. Amy Klobuchar of Minnesota surging in third place.

In contrast to the celebrations from the top three contenders, there was unsettling disappointment from the campaigns of Sen. Elizabeth Warren and former vice president Joe Biden, who, respectively and dismally, finished in fourth and fifth place.

Meanwhile, Andrew Yang and Michael Bennet both suspended their campaigns without making any headway in Iowa or New Hampshire.

“This victory here,” Sanders said Tuesday evening in Manchester, “is the beginning of the end of Donald Trump.” But he added that his campaign is not about just beating Trump, “It is about transforming this country.”

On the eve of the primary, Sanders, joined on the podium by Rep. Alexandria Ocasio-Cortez, Professor Cornel West, and actress Cynthia Nixon, called Trump “a racist, sexist, and a religious bigot, and those are his nice qualities.” It aroused the crowd and that enthusiasm carried over to election night.

Even so, Sanders should be worried that his victory was not overwhelming and the combined numbers of Buttigieg and Klobuchar easily surpasses his count, though he and Buttigieg both received 9 delegates with Mayor Pete narrowly leading in the overall count toward the 1,991 delegates to win the nomination.

“Here in a state that goes by the motto, ‘Live Free or Die,’ you made up your own minds,” Buttigieg said during his victory speech. “You inserted that famous independent streak, and thanks to you, a campaign that some said shouldn’t be here at all, has shown that we are here to stay.”

Here to stay appears to be the condition of Sen. Klobuchar’s campaign, and her surge began after the debate in Iowa and will be tested in Nevada and South Carolina, the sites of the next caucus and primary.

“Tonight in New Hampshire, as everyone had counted us out even a week ago,” Klobuchar told her throng of supporters, “thank you pundits—I came back and we delivered.” This success may help add to her campaign coffers but she still has to muster more numbers among the moderates, many of whom are firmly sequestered in the camps of Mayor Peter and Biden.

Biden, who for many months led the national polls among the contenders, is not faring well at all, and if he doesn’t pull off a comeback in Nevada and later in South Carolina his latest bid for the presidency will be curtains.

And looming on the horizon for the Democratic hopefuls is the deep-pocketed Michael Bloomberg. His ads slamming Trump have given him national recognition and propelled him to third in recent polls. But the former mayor of New York is yet to get on the ballot, save as a write-in, apparently waiting to test his candidacy during Super Tuesday in March.

With Sanders and Buttigieg neck and neck at the head of the pack, this is just the scenario Bloomberg was hoping for—with no clear lead from the frontrunner.

But as the race nears the finish line, with candidates dropping out, and the donors thinning for even those on the top tier, the outcome could very well depend on who has the financial staying power, boots on the ground, electability, and who in fact can beat Trump.