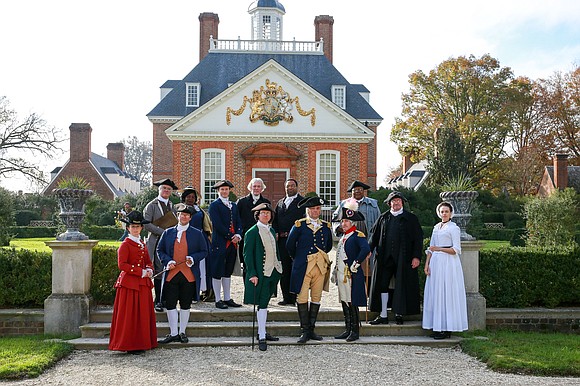 Upgrade your Black History Month celebration this year by going to Colonial Williamsburg! During February, Colonial Williamsburg, one of the country’s largest interpretive museums, showcases the best of its intriguing year-round interpretation of 18th-century African American life in Virginia. Colonial Williamsburg’s interpreters teach visitors about the people, society, and culture of Williamsburg during the colonial era. Many impart information costumed and speaking in first-person as a specific character.

One of the most salient things about the presentation of Black life in colonial-era Williamsburg is the diversity within the Black population, which accounted for over fifty percent of Williamsburg residents. Some were enslaved, some were not. Some were business owners, some relatively well-respected paid workers. Many were mixed-race.

The faithfully reconstructed eighteenth-century Williamsburg bustling thoroughfare, Duke of Gloucester Street, is the site of much of the interpreting. Here visitors will find characters like John Hope The Famous Barber of York. Hope rose to prominence for his preternatural skill and eventually became so well-known and respected by his elite clientele, they petitioned the legislature to free him.

Memorializing by name each of the enslaved African-Virginian men and women known to have lived in Williamsburg from 1763 to 1785 is the special exhibition “Revealing the Priceless: 40 Years of African American Interpretation,” which visitors can catch at Raleigh Tavern. This exhibition pulls back the curtain to reveal contributions of hundreds of interpreters, administrators, historians, archeologists, curators and community partners who have contributed to telling their story in the forty-year period since Williamsburg began incorporating African Americans into its overall programming. Look for the picture of a certain handsome TV doctor and real life social activist who participated in a special interpreter program in the past!

Visitors can get a powerful behind the scenes look at the people doing the interpreting in the stellar “My Story, My Voice” program which not only presents personal stories, but also explains what they do in order to more perfectly embody their characters.

An enlightening discussion of the Bray School for Black children called “Teach them Diligently,” recalls how special a place it was. Williamsburg trustee Robert Carter Nicholas, after visiting the school in 1762, reported that “at a late visitation of school we were pretty much pleased with the scholars’ performances, as they rather exceeded our expectations.”

Many Blacks in Williamsburg were highly educated and sometimes more so than their white counterparts. Jupiter Evans was one of them. Jefferson’s childhood companion became his manservant as an adult among other things which included making Jefferson’s heralded cider, helping to build Monticello and a host of other achievements. Meet him in “Jefferson and Jupiter: Across the Board” at 1:30 p.m. Feb. 10 and 17

James Armistead became a spy for the Continental Army during the Revolutionary War. “Marquis and the Spy: Reunited,” at 1:30 p.m. Feb 13, 20 and 27. James Armistead Lafayette and the Marquis de Lafayette are reunited after nearly 40 years.

Make of it what you will but Randolph left instructions that his slave, Aggy, and her two children be freed upon his death. He also left a sizable trust for the three of them in Britain, where he wished for them to live. His requests in his will were ignored by his son and Aggy eventually sued. “To Build a Life” Fridays at 1:30 p.m. considers this case and the interracial relationships during that era.

“Dressmaker to the First Ladies” at 3:30 p.m. Feb. 10 and 18. Meet Elizabeth Keckly, a former enslaved woman who dressed the first ladies of both the Confederacy and Union.

Visitors can mix things up and by taking in the many other attractions in the area from funky literary/fairytale (yes) themed Culture Cafe with its disco playlist, to La Tienda whose laid-back siesta vibe serves as backdrop to the lively flavors of Spanish tapas and refreshing sangria.

Cafe Provencal at Williamsburg Winery is an understated but sophisticated fine dining experience featuring an assortment of wines from a list as impressive as it is expansive. Affable Chef David McClure makes inventive and thoughtful use of both locally sourced ingredients and wine pairings to come up with a menu sure to deliver on quality. McClure’s Chocolate Sphere is a dessert sure to make a chocolate lover out of anyone! Made of smoked milk chocolate mousse, crystalized rose, cocoa nibs, gold leaf, Nutella crème anglaise it’s a pleasure to behold as well as taste. For a perfect complement, pair it with the incredibly rich almost jammy, raspberry red Vin Licoureux de Framboise. Mwah!!

For a bit of relaxation, wind down at Williamsburg Spa which boasts a list of services using products whose ingredients are aromatherapy based and mainly sourced locally.

Visit https://www.colonialwilliamsburg.com/plan/itineraries/african-american-experience for more information on all the sights etc. for Black History Month at Colonial Williamsburg and follow @colonialwmsburg.