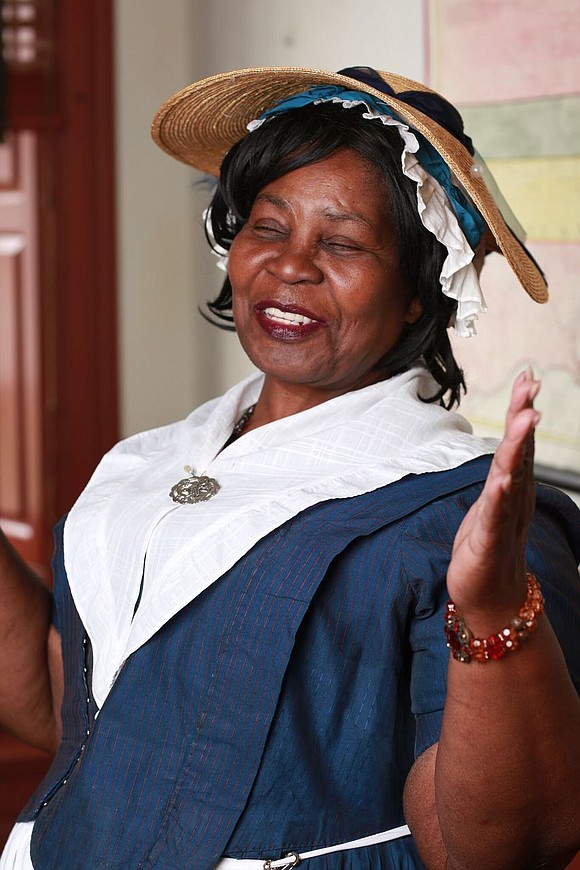 Emily James’ career as an interpreter at Colonial Williamsburg, Virginia began over 30 years ago but she has been interpreting colonial-era entrepreneur Edith Cumbo, she says, “for about ten years now.” James is one of dozens of “interpreters” whose talent, love for people and passion for knowledge makes history come brilliantly alive for those who visit.

Sprawled across 300 acres holding 603 buildings, 88 of which are original, Colonial Williamsburg also boasts a host of restaurants, hotels, museums, a golf course, and a spa offering top-notch service using herbal-based products; most are produced locally and are in line with the theme of an era where everything was still all-natural. All of this is offered with traditional southern charm and down-home flair.

The interpreter department has different types of interpretation. Emily is a part of the ‘actor interpreter’ unit which performs first-person character interpretation based on their historical research.” Emily is part of a subsection of that group called Nation Builders; they spend most of their time interpreting one figure at numerous locations.

The interpreters, who do ‘perform’ in period costume, embody characters that include a cross-section of colonial society, which included African born and American born Blacks, both enslaved and free. Edith is just one of those that visitors would encounter.

Cumbo was born a free woman to an indentured servant woman from Ireland, Francine Cumbo, and Richard Cumbo, a free Black man.

“One in five people walking along [Williamsburg’s] Duke of Gloucester street in the eighteenth century looked white but weren’t,” explains James. Duke of Gloucester Street was the commercial and social hub of Colonial Williamsburg. It’s where the Pasteur & Galt Apothecary Shop, the Secretary’s Office, M. Dubois Grocer’s Store and numerous taverns were located including Raleigh Tavern and Bakery, where enslaved Backs were sold outside as people like Patrick Henry and George Washington got their drink on inside. Walking the narrow streets and alleys, standing in low-ceilinged wooden buildings, observing the low skyline, quaint wells, and vegetable gardens dotting the community makes it very easy to experience the feel of some of 18th century daily life.

“Edith was a woman to be reckoned with,” James says forcefully “and that’s why I play her.” Cumbo owned 50 acres of land collectively, in Virginia and Ohio, and was the owner of a small laundress and seamstress business. “That’s why when you see me do my character, you’ll always see me with an account book,” James explains.

Cumbo was victorious in court; quite a feat for a woman much less for a Black woman at that time. She took a white man to court on charges of trespass and assault and won. When charges were brought against her for having a child out of wedlock, she won that too; extraordinary considering many white women didn’t. The father of her child though, was reportedly a prominent and powerful figure in Williamsburg.

There may have been a calculated reason Edith––as both property and business owner––didn’t marry. According to the online site Encyclopedia Virginia, “ Married woman, or feme covert, had no legal status; did not control any property, even if she brought it to the marriage; and ceded to her husband full rights to all incomes and wages she earned. A single adult woman, whether unmarried or widowed, was considered a feme sole. She could buy and sell property and engage in contracts and other business and legal transactions.”

The Cumbo family, in today’s terms, suggests James would have been considered a “gold star” military family. Edith’s father, James states, “Served alongside George Washington in the French and Indian War. It’s documented that her father and all five of Edith’s brothers served in the military. All the males in the family served with Commander in Chief George Washington and the Allied Forces.”

Not far from Williamsburg, near Jamestown Settlement, another Virginia interpretive museum site, can be found a commemorative plaque with the names of some of the men in Edith’s family. It describes them as “...Patriots who served in support of our nation’s war for independence.”

James explains what keeps her excited doing this after so many years. “I tried to use the character to show it’s not the condition you lived and worked under that made you a slave, it’s the law. I also want to show human relationships, and use the character to reconnect with what’s going on in people’s lives today.”

Some of the highlights of James’ career at Williamsburg was getting kudos from “Roots” author Alex Haley and finding friendship with those who visit. “I still enjoy what I do and the friendships I’ve forged from doing this. It fills me with such satisfaction. I’ve been doing this for so long and I can infuse the love I have for my brothers and sisters in what I do. We need to listen to each other and work together to make a better nation.”

Fulfilling a personal mission of being a voice for the voiceless is also gratifying for her. “I’m telling a story that these people weren’t in a position to tell and if I don’t who will?”

For more info on seeing James and other interpreters at Colonial Williamsburg, please visit https://www.colonialwilliamsburg.com/plan/calendar/visit-a-nation-builder