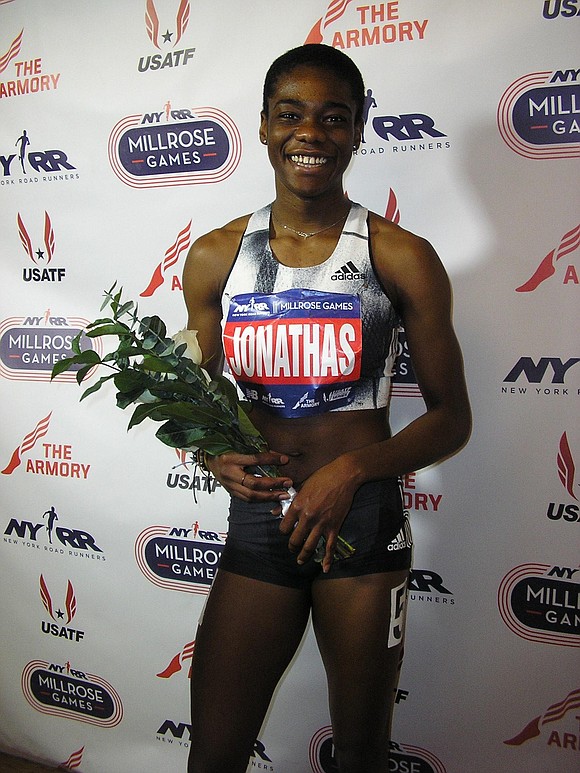 The 60-meter dash was the marquee event for the women with four-time Olympian Allyson Felix headlining the field. Now a mother to daughter Camryn, Felix’s inspiration takes on new dimensions. Not at her best at Millrose, Felix finished sixth, but she appreciated the ability to kick off her season.

“For me, it’s all about getting my legs turning over again and get sprinting,” said Felix. “The 60 is not my event—it never will be, but it’s all a piece of the puzzle.”

She added, “My daughter is a huge motivation for me. It’s kind of shifted my focus completely. Obviously, I love to win. I love to challenge myself. Now, I want to show her you can overcome adversity. I want to show her what hard work looks like, what strong women look like.”

First place in the 60 went to Javianne Oliver, second place to 2016 Olympian Morolake Akinosun and third place to high schooler Briana Williams. It was Akinosun’s first Millrose since tearing her Achilles tendon in a 2018 indoor race. “Being back on this track at this meet is great,” she said. “Indoor is helping me get into a really good race rhythm.”

“It’s great running on this track with a great field of women,” said Oliver. “I’m happy that I performed today and I ran season’s best, but I don’t think we’re ever satisfied as competitors.”

In her first Millrose Games, world record holder in the 100-meter hurdles Keni Harrison defeated Olympic silver medalist Nia Ali in the 60-meter hurdles. Although she was disappointed with her start, she was able to pull away for the win.

“It was exciting. The crowd is really hyped and they love track and field, which is really nice to see and nice to feel welcomed,” said Harrison, who is running again next week at Clemson to finish her short indoor season.

Wadeline Jonathas, who is new to pro track, dominated the women’s 400 meters. She won gold at last year’s World Championships as part of the U.S. 4x400 relay after an outstanding season at the University of South Carolina. Amazingly, she began her college career at a Division III institution. She said she felt rushed at the beginning of her Millrose race, but finished well.

“My goal is to win the gold at the Olympics,” said Jonathas, who has one more indoor race. “That’s what I’m working for, and I pray that it happens. Everything I do is to push me toward that goal.”