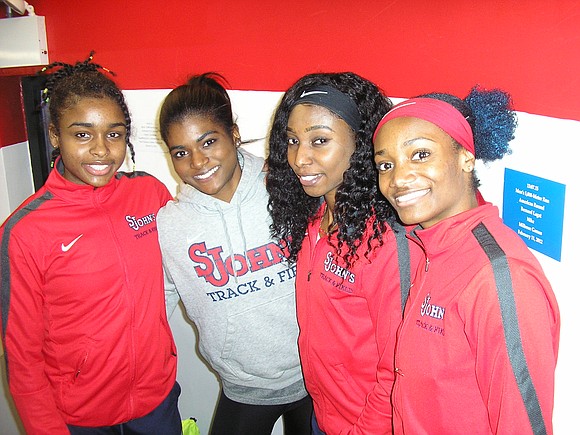 New Jersey native Ajeé Wilson didn’t just grace the cover of the program for the 113th Millrose Games; the cover depicted her coming of age from a high schooler in 2012 to a rising young talent in 2017 to one of the dominant middle distance runners in the world in 2019. Her progression to the pinnacle of the sport continued at the 2020 Millrose Games at which Wilson set another American record in the 800 meters.

“This was definitely the loudest I’ve ever heard the crowd,” said Wilson. “I ran strong. I feel good. Millrose is super special. From high school, it was about qualifying for that Millrose [high school] mile and being able to run in the same meet as the pros. The atmosphere and the crowd has always been super special to me.”

Wilson definitely felt extra pressure being on the cover. When she saw the program, she told herself, “Now, you have to win. You’ve got to deliver.”

The 4x400 team from St. John’s University placed first in the college women’s relay, dominating from start to finish. The biggest challenge came from a strong Stony Brook team.

“It was super exciting. I knew that everyone was going to deliver,” said Brianna Burkley, who ran the first leg for St. John’s.

“Coming to St. John’s is like a dream come true. I love this track team,” said Avon Samuels, who came to St. John’s after two years at Monroe College.

Skyy Diop ran the third leg. “I knew what I had to do and I executed. We push each other and we’re motivated off each other,” said Diop.

Leah Anderson ran a sharp and fast anchor leg. “It’s always an honor to run anchor leg. I trust these girls, so I knew they were going to give me a good position to bring it home,” said Anderson.

Although the Bullis School is in Maryland, the track athletes compete at the Armory three or four times each winter, feel at home and have dominated the girls 4x200 relay at Millrose Games for several years. Senior Leah Phillips even pulled double duty, running in the 60-meter hurdles.

“It feels really good that we can put all the work that we’ve done—making sure that we’ve worked on the small things—together in our competitive meets,” said Phillips. “I love the energy of Millrose, the competitiveness, the [range] of all the athletes from pros to the little ones who run the 60. The Armory has a historical feeling. It set a tone for us.”