Yolanda Brooks and John Ruiz: Empowerment through the arts 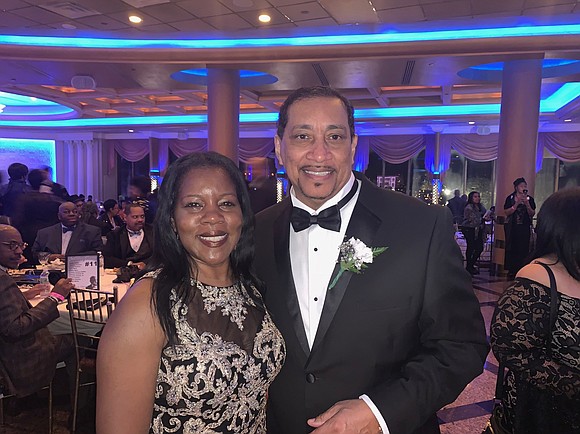 In a neat East Harlem office, decorated with accolades, photos, and props, sit Yolanda Brooks and John Ruiz. The two are a couple that is spearheading Black empowerment and education through the arts. Their most recent and upcoming project is a research documentary on Nelson Mandela, titled “Mandela: Coming to America” for the 30th anniversary of Mandela’s meeting with David Dinkins.

Married for four years, their union is a seemingly perfect match. The pair work together to create plays, one of which is their hit “Mandela” that is now in its sixth year. Ruiz compares their creative dynamic to a song. “…She’s the words to my music. Without her there is no melody,” he said.

Yolanda Brooks is a senior inspector for the NYC Department of Health for 25 years as well as being the CEO of “Our Firefighters Children’s Foundation” and her own production company “Yolanda Brooks Productions.” John Ruiz also known as the Rappin’ Fireman has an extensive career in teaching young children about fire safety for 36 years. Ruiz was a NYC Firefighter and is now in his 9th term of being elected a Democratic District Leader.

The duo has written, produced and toured a number of plays that leave a lasting impact on their audiences. These plays include, “Scrooge,” “Motown,” “Harriet Tubman,” “Barack Obama,” “Martin Luther King,” “African American Adventures” and more. A majority of their plays center Black leaders and culture to shed light on the impact these people and moments had and continue to have. The plays are geared towards school aged children with Black History Month being the most popular time they showcase their plays.

Both having the theater bug, they believe that a play should be an experience as much as it is entertaining. With that notion, it is exactly what Ruiz and Brooks do when it comes to their productions. “We have a unique and clever way of telling a story,” said Ruiz. “We want our audiences to feel connected and we want them to feel different from when they walked in,” Brooks said.

“We took a deep breath, exhaled, and there it was,” said Brooks. The first scene of their play “Mandela” was born. Written when Mandela’s life was coming to an end in 2014, John and Yolanda were sitting at their dining room table, also known as their special table, when John suggested that the two write about Nelson Mandela. Their work snowballed from a 15-minute play to a major production, to then premiere in the National Black Theater.

Brooks and Ruiz’s connection to Nelson Mandela started early in their lives. As a child, Brooks’ parents would go to protests while Mandela was in jail and would explain to her and her siblings what was happening to him, the people in South Africa, and why these events were occurring. “I grew up in a household where standing up for your rights was at the center of what we were taught. Even though I was a small child I knew right away that this was wrong. It stuck with me for the rest of my life,” explained Brooks.

Growing up impoverished, Ruiz saw a sign near the community center where they used to give out food that read “Free Mandela.” Ruiz at the time mistook Mandela for food but was later reintroduced to Mandela through an image of him behind bars. “I couldn’t understand it. Why was this man behind bars? I was a little kid going to Catholic school. Years later I found out that the times were very brutal,” Ruiz said. Hungry for knowledge, as Ruiz grew older, in high school he would go with some of his peers to Columbia University to listen to Min. Farrakhan, Malcolm X, and Rev. Al Sharpton. “You don’t get that stuff in school, and this is why we are out here,” Ruiz emphasized referring himself and his wife. “We are educating children. We are educating adults. Letting them know that if you don’t know where you come from, you don’t know who you are and where you are going to be.”

Pulling back the curtain

Mandela and the upcoming research documentary “Mandela: Coming to America” serve as influential works by Brooks and Ruiz that highlight the life of Nelson Mandela as well as informing their audiences of his impact and things many may not know about him. “If you look at history, it sanitizes a lot of things. It gives you their perspective and it’s not necessarily the true one. What we do is pull back the curtain and expose the wizard, and so what happens is people see that Mandela is really a part of America,” said Ruiz.

It takes a village to put a play like “Mandela” together. With research from Nelson Mandela’s autobiography and insight from former New York City Mayor David Dinkins, Brooks and Ruiz are catapulting his story in a way that brings new energy to the story of Nelson Mandela and how connected he is to American history. “We are doing something that people can feed their mind and spirit with knowledge and understanding of why things look the way they look and how to walk away with that knowledge and go about it how they wish,” said Brooks.

The impact of “Mandela” extends beyond the stage; the couple is responsible for initiating Nelson Mandela Day in New York City. Receiving a proclamation for their work, Ruiz and Brooks’ work is always moving forward.

Planting a seed of knowledge is what Brooks and Ruiz aspire to do with all of their productions. Art has the ability to touch people in a way that reflects their reality and teaches about others.

Confident in their work, the two are not concerned about having to prove themselves as “creatives of color” and feel that people of color should be unapologetic in expressing their truth. “The play is about an uncomfortable topic. It is in your face and raw,” said Brooks. “When people hear Mandela, they do not know what to expect,” Ruiz said. There is a tendency for people of color to check in with white people when telling our stories. “We need to free ourselves as people of color from thinking that we have to take care of the people from the oppressed group when telling our truths. We shouldn’t care how the people from the oppressed group feel because they didn’t care how you felt,” explained Brooks.

Beyond the sorrow that is typically woven throughout the realities of Black history, Mandela is an example of showcasing light and perseverance of a man and his message. “He had a strength that they couldn’t break. He was refined and classy to the end. You can’t make that up,” said Brooks.

When a play like this starts getting traction, calls from white executive producers start to come in wanting a hand in the budding success. Ruiz and Brooks want to maintain what is theirs by keeping complete ownership of their work. “If you don’t invest in yourself, who is going to believe in you?” questioned Ruiz. “It is important for us to own what is ours. If we decide to take it to the next level like Broadway, we hope that our own people invest in it,” he continued.

The attention and admiration for “Mandela” comes with a price. Some people want to have ownership and dominate the play rather than simply enjoy it. Although Brooks and Ruiz are aware of this, they are holding tight to what they have created and will continue to push “Mandela” as a play for the people. “This play invites people to be family with us,” said Ruiz.

In April, “Mandela” will premiere again at The Actors Temple 339 47th Street, N.Y. Log on to: Mandelanyc.com