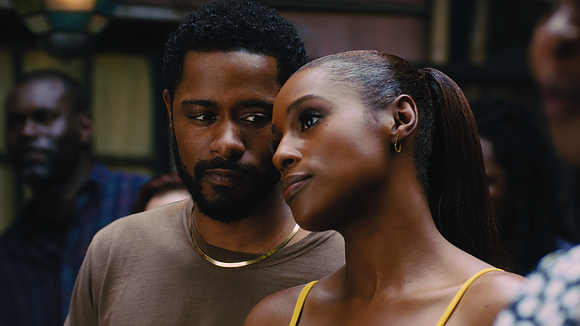 It’s a love story. A groovy, romantic love story where the two main characters have tremendous chemistry and Black love is fully on display.

Michael (Lakeith Stanfield) is a feature writer for The Republic, an online magazine and Mae (Issa Rae) is a curator at the Queens Museum. From the very beginning, it’s clear that these characters know how to spar in a sexy way, evidenced on their first date when they discuss music. She likes Drake, he doesn’t. He likes Kendrick, she doesn’t.

The tension continues because to her, Michael has all the earmarks of being a player so Mae’s trust level is low. The truth of the matter is that he’s rather old-fashioned, chivalrously taking her zingers

Despite their back-and-forth, Mae and Michael are sexy together. It’s an adult and sophisticated relationship. Their roadblock to happy-ever-after is lodged in Mae’s past which counterpoints their growing relationship with flashbacks to Mae’s mother, Christina (Chanté Adams), who was raised in rural Louisiana and fell in love with fisherman Isaac (Y’lan Noel), only to leave him because she was determined to move to New York to make it as a successful photographer.

Which happened—she succeeded. What makes this love story different from most in this genre is how the film captured Mae’s mother’s doomed relationship. Her mother, a child of the 1980s, was filled to the brim with becoming an artist. Actress Chanté Adams (“Roxanne, Roxanne”) gives her character depth and it’s plain to see that she’s a major talent letting her heartbreak seep through her performance.

“The Photograph” jumps between the two eras, deftly, neatly paralleling mother and daughter which begins after Christina’s death from cancer. Michael is assigned to write her profile and Mae begins to notice similarities in her own love life.

Bringing humor to the table with wise observations is actor Lil Rel Howery as Michael’s brother, a happy family man who’s bold enough to tell the love birds the truth about romance. Then there’s a somewhat jarring career twist, but director/screenwriter Stella Meghie is a skilled storyteller who has delivered a modern love story that works.