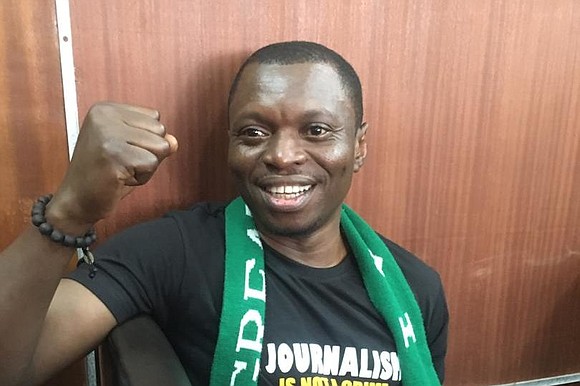 Agba Jalingo, publisher of Cross River Watch, was arrested and jailed last August 2019 until this month when a Cross River court granted bail. He faces trial over a report written by the newspaper alleging that Cross River State Governor Ben Ayade diverted 500 million naira meant for the establishment of Cross River Microfinance Bank.

Charges against Jalingo also include his fraternizing with Sowore Omoyele, publisher of Sahara Reporters and one-time presidential candidate. Charges against them include treasonable felony, terrorism, cultism, and disturbance of public peace.

In a separate development, Fejiro Oliver, publisher of the privately owned Secret Reporters news site, faces five counts of violating the 2015 cybercrime act in connection to articles detailing alleged corruption in Nigeria’s Sterling Bank. A former Bank employee turned whistleblower was also charged, according to the Committee to Protect Journalists which reviewed the charge sheet.

After the death of Alex Ogbu in January, Reporters Without Borders called on the Nigerian authorities to conduct a thorough investigation into Ogbu’s death. He was a reporter for the RegentAfrica Times magazine and website, while he was covering a protest by the Islamic Movement in Nigerian capital, Abuja, on Jan. 21. Ogbu was found dead with an injury to the back of his head. The police had been firing teargas and live rounds to disperse the protesters, Nigerian media outlets quoted witnesses as saying. It was the second death of a journalist in a year’s time, the first being young Channels TV journalist, Precious Owolabi, who was killed in similar circumstances on July 22, 2019. No one has been arrested for his murder.

Finally, the trial of publisher Omoyele Sowore and his co-defendant Olawale Bakare has been adjourned till March 11 on two amended charges of treasonable felony. The prosecution accuses them of organizing a protest tagged #RevolutionNow aimed at toppling the regime of President Major General Muhammadu Buhari.