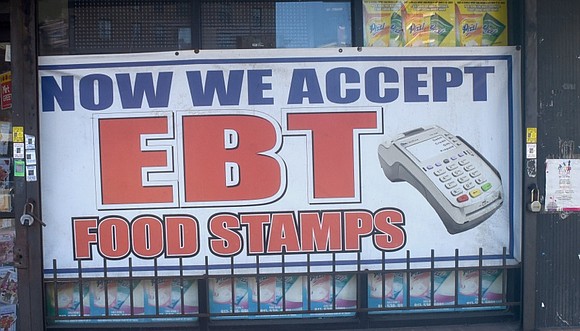 The Trump administration estimates that 700,000 people are going to be impacted by new rules being finalized for food stamp benefits. However, experts say millions could lose their food stamps.

According to the U.S. Department of Agriculture, Trump’s FY 2021 budget proposal includes $68.3 billion for the Supplemental Nutrition Assistance Program (SNAP), $25 billion for Child Nutrition Programs, and $5.5 billion for the Special Supplemental Nutrition Program for Women, Infants, and Children. Officials say participation in the nutrition assistance programs is expected to continue declining with “sustained economic growth” that enables families to work toward “self-sufficiency.”

“We’re taking action to reform our SNAP program in order to restore the dignity of work to a sizable segment of our population and be respectful of the taxpayers who fund the program,” USDA Secretary Sonny Perdue recently said. “Americans are generous people who believe it is their responsibility to help their fellow citizens when they encounter a

difficult stretch. That’s the commitment behind SNAP, but, like other welfare programs, it was never intended to be a way of life.”

However, experts say that $181 billion is being cut from food aid spending over the next 10 years. The proposal eliminates SNAP benefits replacing them with a box of shelf-stable food provided by the government, an idea rejected in two previous years by members of Congress of both parties.

“Though it is unlikely that this proposal will become law, it is troubling that the Trump administration––for a third time––is calling for a massive new governmental bureaucracy to micro-manage the food consumption of low-income Americans,” said Joel Berg, CEO of Hunger Free America. “Amazingly, this proposal would slash food aid but somehow manage to grow the size of big government. There’s no way one can improve nutritional outcomes among families on SNAP by reducing the amount of money they have available for fresh fruits, vegetables, and milk.”

SNAP helps 1.6 million New Yorkers—or nearly 20% of the City’s population—put food on the table and feed their families including approximately 200,000 eligible non-citizens. Losing benefits means losing critical access to food, raising the risk of malnutrition and other negative health effects. Studies have shown that SNAP can counteract food insecurity and lower healthcare costs for recipients by about $1,400 per person.

In New York City, 50,000 women and men would lose over $90 million in SNAP benefits annually. Local officials say the city’s economy would lose more than $161 million annually in economic activity.

Last month, New York City joined a group of 15 attorneys general in a lawsuit to stop the Trump administration from eliminating food assistance. The lawsuit asserts that the rule directly undermines Congress’ intent for the food-stamp program, and that the USDA violated the federal rulemaking process.

“The Supplemental Nutrition Assistance Program is a critical part of federal and state efforts to help the underserved community,” said Council Member Mathieu Eugene. “SNAP provides food assistance to thousands of hardworking Americans who require it to care for their families. As elected officials, we must work together to prevent the disruption of government services intended to help those who struggle with food insecurity.”

NYC Corporation Counsel James E. Johnson said that losing SNAP benefits would go beyond just food. It could have an impact on other things in people’s lives.

“This rule forces the most vulnerable residents to make the harshest of choices: choose food or choose other essentials of life, including housing and medicine,” Johnson said. “This would make long-term stable employment less likely, which is the exact opposite of the result the rule makers claim to desire. With this rule, the Trump administration casts aside our disadvantaged residents and does an end run around the will of Congress, which rejected the very measures the administration now seeks to impose on its own.”