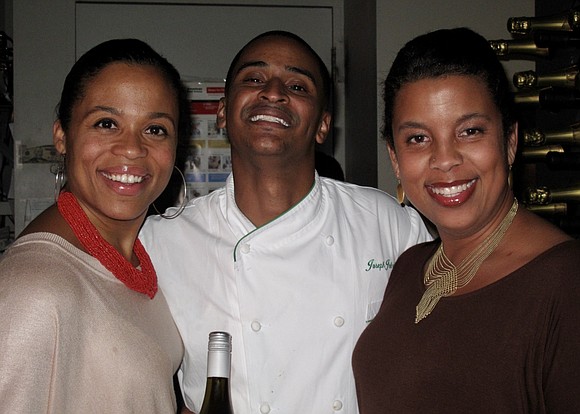 “Black History Month is a chance to reassess where we’ve been as a people and where we’re going. Harlem is a real New York neighborhood, within the overall culture, in that way, because it is so deep-rooted in Black history and today, is a place where both legacy and the future coexist.”

For our first Harlem Happening History installment, I sat down with Chef Joseph “JJ” Johnson at his newly opened fast casual restaurant, Fieldtrip, in Harlem. He is doing great things both in and out of the kitchen and in and out of Harlem.

I have known Chef JJ for almost a decade. In that time, he has always been pushing his boundaries to know and to do more. With his food, he celebrates the traditional by elevating it and putting his own unique touch on it.

I first met Chef JJ almost 10 years ago. He was the first chef of the first wine bar in Harlem, Nectar. It was the second wine establishment from owners Jai Jai Greenfield and Eric Woods after opening their pioneering first true wine-focused store, Harlem Vintage.

Fast forward to 2011 when Nectar had an event to introduce their new chef, JJ Johnson. Before I even laid eyes on him I got to see and taste his food. It was nothing I had tasted before in Harlem. It was fresh and spirited and highlighted the wine list. I also knew how small his kitchen was so to produce high-end bites was no small feat.

Once I finally met Chef JJ and we chatted it up, I knew we were kindred food spirits and he was destined for great things. Unfortunately, in 2012 the economy prevented Jai Jai and Eric from continuing on with the magic of Nectar and Harlem Vintage thereafter.

Chef JJ is not one to let any grass grow under his feet. Since our first meeting at Nectar, I would see him at citywide food events I covered in this column. Like me as a food writer, he would sometimes be the only Black chef and, early on, definitely the only chef from Harlem in the room. We would chat about being the only voices at these events, but be happy to bring it back to our community and push others forward.

Chef JJ’s tenacity and work ethic is contagious. Since 2011 he has cooked for some of the best restaurants in the city, reopened The Cecil and Minton’s in Harlem with restaurateur Alexander Smalls, had a very successful residency at Chef’s Club and was the Executive Chef of the Henry at Life Hotel.

Today, Chef JJ is telling the story of the world’s staple ingredient, rice, at Fieldtrip. He does so unabashedly wherever he is. And stay ready (so you don’t have to get ready) for whatever he has coming next.