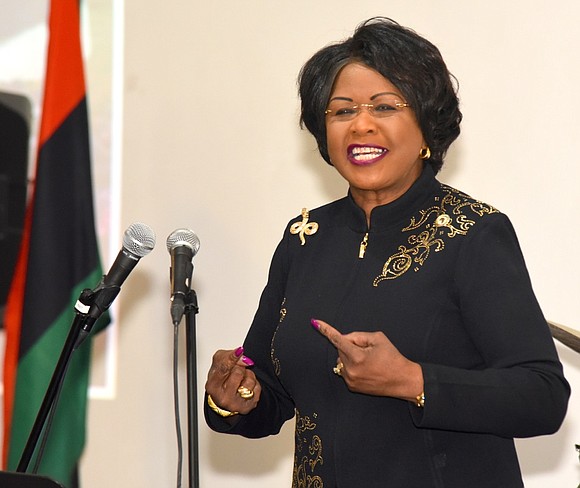 Dr. Arikana Chihombori-Quao, the diplomat, medical doctor, educator, and much-sough-after public speaker certainly can command a room, as she demonstrated this past Friday, Feb. 21, at Harlem’s National Black Theater.

Part of the reason why could be her no-holds-barred statements such as: “We need to come together. We need to first decolonize the Black mind. We need to take time to sincerely inventory who we are and how we were colonized, otherwise the battle is going to be lost.”

She was ousted last year from her position as the African Union’s U.S. Ambassador to the USA, her supporters say, by the political shenanigans of in-the-shadow operatives who opposed her calls to investigate and eradicate deep rooted colonial policies––and continuous theft of big money, and every resource of Africa’s 55 nations with their control of every economy and each and every industry.

“The colonists never left,” Ambassador Chihombori-Quao told the Amsterdam News in an exclusive interview. “There are various factors really if you were to talk about why Africa is the way Africa is today. The reality is the colonizers have never left. They are still very much involved in everything we do, and until we realize that when we got our independence in the ’50s and ’60s we only got political independence.

“Even that is limited because they still dictate and control who becomes the next president in the country.”

D12 set the tone with the statement of the Southern African Development Community (SADC), “expressed solidarity with Zimbabwe, and called for the immediate lifting of the sanctions to facilitate socio-economic recovery in the country,” in their August 2019 Summit. Thus, on the 55th commemoration of the assassination of Malcolm X, February 21, 2020, Ambassador Dr. Arikana Chihombori-Quao, was the keynote speaker.

As master drummer Jerome Jennings blessed the awaiting audience, the Ambassador granted the Amsterdam News an interview in which she noted that Africa was still very much in the struggle to free itself from the brutal yoke of European colonialism. “We never got our economic liberation that they kept away from us. How did they do that? You can imagine that in an average African country the economy is controlled by businesses that are owned by individuals from the former colonial masters,” she said. “So if you look at former English colonies we still have a lot of English companies in these countries, and they are the ones that run and employ a majority of the population. So, because of that, that limits the president’s ability to really make decisions that they need to make because of the consequences, should those who control the economy become upset with them, and so economic liberation is what we need, and until we have economic liberation Africa will continue to struggle.”

A holder of several degrees, businesswoman Ambassador Chihombori-Quao, CEO and founder of Bell Family Medical Centers, was a dedicated medical doctor in the United States for 29 years before in 2017, HE Dr. Nkosazana Dlamini Zuma made a completely unexpected request of her––that she represent the interests of Africa’s 55 countries.