With the ouster of Pat Shurmur, the descending Giants start over again 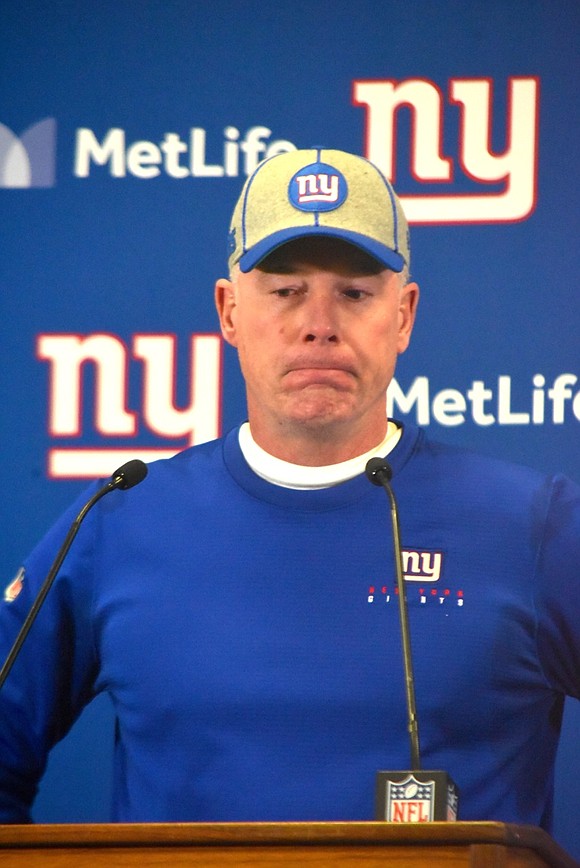 As he was peppered with questions from the media early Sunday evening regarding his future with the Giants shortly after a season-ending 34-17 loss to the Philadelphia Eagles at MetLife Stadium, Pat Shurmur bore the countenance of a man who seemingly knew his time as the team’s head coach was perilously limited.

“I think we didn’t win enough games, right?’’ Shurmur said of the 4-12 Giants. “I own that. I don’t make any excuses for that. I do know there’s things that happened this year where this team improved in a lot ways and I feel like it’s only going to get better. The structure of how we’re built, we’ll be able to improve now, quickly.’’

Perhaps Shurmur’s view of the Giants and his optimism for the team’s future is warranted. Yet he will not be the man to fulfill their promise as roughly 12 hours following this statement he was fired after only two seasons as their head coach. The 54-year-old Shurmur’s overall record with the Giants was 9-23, evidently unsatisfactory for co-owners John Mara and Steve Tisch.

Under the franchise’s last three head coaches, which includes Tom Coughlin and Ben McAdoo, the Giants have only one playoff appearance––in 2016––over the last eight seasons. Shurmur was also terminated by the Cleveland Browns in December 2012 after ironically compiling an identical 9-23 record in his first experience as an NFL head coach. He was the interim head coach of the Eagles for one game in 2015. Prior to being hired by the Giants, Shurmur was the offensive coordinator for the Minnesota Vikings and was named the NFL Assistant Coach of the Year for the 2017 season.

But the Giants’ lack of consistent offensive production––the unit ended the NFL’s regular season ranked 23rd in the league––was a significant factor in his dismissal. For the moment, general manager Dave Gettleman, who replaced former GM Jerry Reese in December 2017, was retained by Mara and Tisch.

“Steve and I have had many extensive discussions about the state of the Giants,” Mara said in a statement issued by the organization on Monday. “This morning, we made the very difficult decision that it would be in the best interest of the franchise that we relieve Pat of his duties. The last three seasons have been extremely disappointing for the organization and our fans. Pat has been a successful and highly-respected NFL coach for 21 years and he is not solely responsible for our record. But we came to the conclusion it is best to have a fresh start with the coaching staff. We very much appreciate how much Pat has done for this franchise. He is a man of character and integrity and the team has conducted itself with pride and professionalism.”

As for Gettleman, Mara said, “We think he’s capable of putting a great team together and he’s going to get that opportunity. To the extent we need to make changes in personnel or the way we do things, we’re going to discuss that.”

Gettleman and Shurmur were hired with the charge of changing the culture of the team, as the locker room had become divided and the atmosphere toxic, much of the blame fairly or unjustly ascribed to wide receiver Odell Beckham Jr. Beckham was subsequently traded to the Browns and the Giants filled their roster with high character veteran players such as linebacker Alec Ogletree and offensive tackle Nate Solder.

But an improvement in culture hasn’t translated to wins. And as Shurmur noted in his last press conference as Giants head coach, “This is a wins business. I get it.” Ultimately, he got whacked.