Young Black hoofer holding it down in Dorrance Dance Company 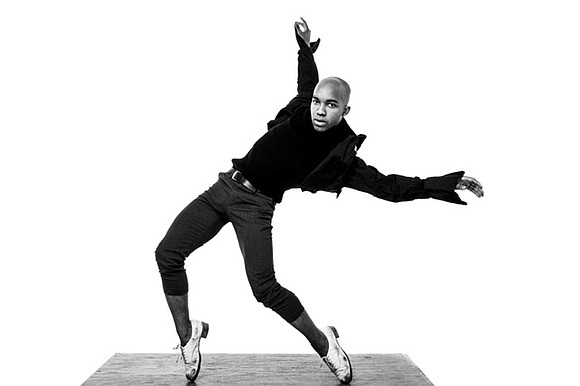 Byron Tittle, a young tap dancer with the Dorrance Dance, the critically acclaimed tap troupe headed by MacArthur Award winner Michelle Dorrance, wants everyone to know about the innovative version of “The Nutcracker” the company is performing at The Joyce Theatre during its three-week engagement, Dec. 17–Jan. 5.

In fact, Byron is so excited that, during an 8:30 a.m. interview just before rehearsal, he talks fast and answers questions without skipping a beat. “I’ve been with Michelle’s company since 2012, but I have known her since I was eight-years-old. She taught tap at New York’s Broadway Dance Center and I was a part of a summer youth program. As a teacher, Michelle was so exuberant and exciting, and her love of the art form was so obvious.”

Byron says his own love of tap began, “when one of my teachers showed me a lot of footage of tap dancers that looked like me, Black male tap dancers, folks like the Nicholas Brothers, Honi Coles, Bunny Briggs—all of those great artists who danced so easily and effortlessly it was like they were having a conversation.” Byron says that’s what happens with Dorrance Dance. There’s something else the old-timers did that Byron says is part of dancing with Dorrance. “The tap dance community is a community and there is so much love that regardless of race, gender, or sexual orientation, as an LGBTQ person, I’ve always been accepted because we have so much love and support for each other.”

Dorrance, you see, is one of a number of white dancers practicing an artform intricately intertwined with the history of a stolen people, a brutal history, a culture transformed in America’s pressure cooker where West African music and a dance mixed with other cultures’ jigs, step and clog dances and such, creating a unique fusion of movement and rhythm. In its heyday, tap, like so many dance forms, both concert and vernacular, with powerful African roots, stole centerstage and caught on like wildfire. It became immensely popular and the careers of legends like Bill “Bojangles” Robinson and Fred Astaire speak volumes about both tap and racism’s impact on culture in America. A couple of decades ago, when I interviewed Black tap legends Honi Coles, Buster Brown, Peg Leg Bates, Marion Coles, Henri LeTang and Pete Nugent (who, back in the day, actually taught classes at the Dance Theater of Harlem), and, more recently, Maurice Hines and Savion Glover, their love of the artform and their determination to keep it alive was a dominant theme. They wanted to know that a young generation of Black hoofers would follow in their footsteps. Byron Tittle clearly seems on his way to doing just that by performing with Dorrance Dance.

Described as a rare artist who makes dances as innovative as they are engaging, Michelle Dorrance last captivated audiences with a smash-hit Joyce Theatre season back in 2017. Now, she and her energetic band of hoofers are back just in time to ring in the New Year with a jazz-infused program. Each of the three-week programs will be slightly different but each features Dorrance’s quirky spin on that holiday staple, “The Nutcracker.” Instead of using the traditional Tchaikovsky music, Dorrance set her dance to a Duke Ellington and Billy Strayhorn score.

Describing the inspiration for the jazzy Ellington Nutcracker, Dorrance says, “There’s an album of three suites, that I’ve listened to since I was a kid and I fell in love with. The original story of the ‘Nutcracker’ is weird. Not everybody covers all the elements and we’re absolutely taking liberty with the story except to include things that aren’t always included. It’s interesting what tunes Duke and Billy Strayhorn decided to explore, and we are taking that and running with it into the direction of our dreams as opposed to using it as a limiting device. Also, we’re exploring a language that is true to the period and true to the music. The only reason we moved forward with this is because Josette agreed to be the Sugar Plum Fairy, which in Duke’s version is the Sugar Rum Cherry.”

Josette Wiggin-Freund, one of the other dancers Dorrance refers to as collaborators, told one reporter, “I think our version and the story that we’re telling, the twist that’s happening in our story is actual kind of rewarding for all of us. I think we’re finding parts of ourselves in this story.”

Together, Dorrance and collaborators-Hannah Heller, Melinda Sullivan, and Josette Wiggan-Freund round out the three-week engagement by paying tribute to another jazz great with the New York premiere of All Good Things Come to an End. The iconic music catalogue of Black jazz great Fats Waller sets the mood for a journey through tableaux, from “Cane and Able” to “The Myth of the American Dream,” showcasing the rich, layered sound for which the quartet is known.

Other highlights of this engagement include “Elastic Times,” an excerpt from the 2018 sensation “Elemental,” co-created by Dorrance and Nicholas Van Young, featuring original live music by Donovan Dorrance, Gregory Richardson, and Aaron Marcellus; “Harlequin & Pantalone” (2019), choreographed by guest artist Bill Irwin and danced by Irwin and Warren Craft; and “Basses Loaded,” a glorious piece for four dancers and four basses.

Summing up his sense of the season, Byron says, “Michelle pours every ounce of her being into everything she does and I feel so lucky to be in this program.” We’re so lucky he wants audiences to feel the same way too.