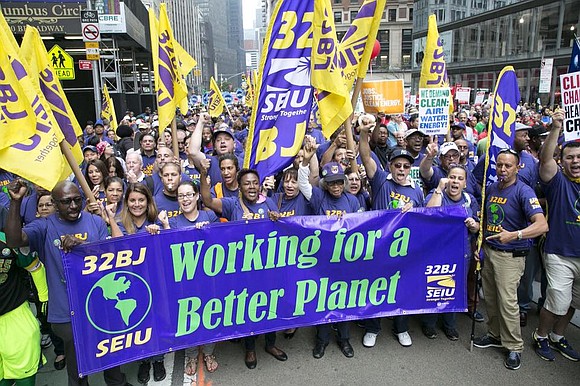 Puerto Rico has been ravaged by hurricanes and now by earthquakes. One union has come out to stand by their brothers and sisters.

A 6.4-magnitude earthquake hit the country on Tuesday, Jan. 7, and, as of press time, killed at least one person. The quake caused power outages across the island and structural damages to roads and bridges. It was the largest in a series of earthquakes since late December. There have been 24 aftershocks.

SEIU 32BJ President Kyle Bragg expressed sorrow for the victims and noted how the country’s well-being is on thin ice.

“Our 32BJ members extend deepest solidarity to our family and friends in Puerto Rico, including members of our sister locals SPT and UGT, after the fatal earthquakes that have struck the island,” said Bragg in a statement. “The loss of life and severe damage to homes, schools, roads and other vital infrastructure are a cruel reminder not just of the devastation inflicted by Hurricane Maria over two years ago, but of the fragile state of Puerto Rico’s structures, institutions and communities due to the ongoing damage caused by disinvestment to serve illegal debt and the federal government’s callous disregard of Puerto Rican families’ needs for a just recovery.”

“Beyond supporting the critical work to respond to the immediate needs of families on the island, Congress must cancel the debt and invest in the people of Puerto Rico to ensure they can build homes and lives resilient to earthquakes, hurricanes and climate change,” stated Cuebas. “We have raised enough red flags. No more sweet talk by politicians.”

José Ortiz, CEO of the Electric Power Authority (PREPA), said that they’re evaluating substations throughout the island. As of press time, close to 300,000 businesses and residencies were without water service.

At a Tuesday news conference, Puerto Rico Gov. Wanda Vázquez declared a state of emergency while extending holiday breaks for school and temporarily shutting public agency operations. There are more aftershocks expected on the island in the upcoming days.

“We’re talking about a situation that never happens in Puerto Rico,” said Vázquez. “It’s not like a hurricane where we can prepare, that we can see it coming…you have to be prepared.”

Trump has gone back and forth with Puerto Rican officials in the aftermath of Hurricane Maria, pushing back against criticism of how his administration has handled the recovery efforts. The president’s most recent example of his vendetta occurred at the end of 2019 when he personally stepped in to cut billions in Medicaid funding for Puerto Rico in a $1.4 trillion budget package.

Cuebas stated that this is yet another example of how the president feels about Puerto Rico ever since the elected officials criticized him. He also said that the issue is bigger than Trump.

“Also to blame are the cruel austerity program that has deprived the island of critical infrastructure funding for years, as well as the lack of federal funding for people to rebuild after Hurricane Maria,” said Cuebas. “Congress and the president have shirked their duty to Puerto Ricans, putting few resources back into the communities on the island, which has weakened the local economy, caused misery for working families and set the stage for calamities like what we see unfolding now.”