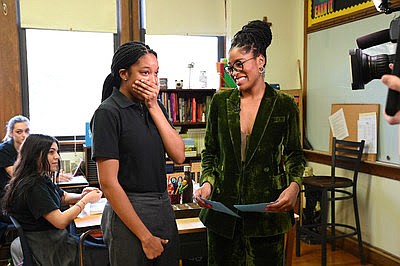 Myah Mitchell, 16, of Cambria Heights, Queens received the surprise of her life when TV cameras showed up at The Mary Louis Academy in Jamaica on Thursday. She got the news that she was one of the 100 students heading to Walt Disney World in March for the 2020 Disney Dreamers Academy.

Walt Disney World Resort revealed the names of the 100 high school students from across the nation who will participate in the event hosted by Steve Harvey and ESSENCE Magazine. Each student receives an all-expenses-paid trip to Walt Disney World to participate in the immersive, transformational four-day experience that will take place March 12-15.

ABC's Good Morning America surprised Mitchell by showing up at her school this morning. Keke Palmer, the host of ABC's daytime show Strahan, Sara and Keke, delivered the news. An aspiring astronaut, Mitchell received a special video message from her hero Mae C. Jemison, the first Black woman to travel to space.

Along with Mitchell, Fatoumata Soumare from Brooklyn was also selected to participate in this year's Dreamers Academy

The program, now in its 13th year, is a part of Walt Disney World's commitment to helping the next generation of young people by inspiring them at a critical time in their development. The Disney Dreamers Academy theme is "Be100," encouraging teens to be positive, to be "all in" and to carry what they learn back with them so they can pursue their dreams and make a difference in the lives of others.

"After 12 successful years, we know the profound impact this program has on these students," said Tracey D. Powell, Walt Disney World Resort vice president and Disney Dreamers Academy executive champion. "One dream can change the world, and through Disney Dreamers Academy we hope to help these amazing teens turn their dreams into reality."

Participating students, known as "Disney Dreamers," embark on a journey throughout the Walt Disney World theme parks and behind the scenes of this 40-square-mile vacation destination. It's a vibrant classroom where students discover new career opportunities, pursue their dreams, and interact with Harvey and other celebrities and motivational speakers.

"I know from personal experience that big dreams lead to big success," said Harvey. "Disney understands that concept better than any other company and that is why I partner with them every year on this program to encourage big dreams for the next generation."

Since 2008, Walt Disney World Resort has provided all-expenses-paid trips to more than 1,200 students, plus a parent or guardian, to participate in the annual Disney Dreamers Academy. Students are selected from thousands of applicants who answered essay questions about their personal stories and dreams for the future.

"Meeting the 100 impressive students selected for Disney Dreamers Academy each year is a personal highlight for me," said Michelle Ebanks, Chief Executive Officer of Essence Communications Inc. "I am continually amazed by their ambition, talent and perseverance. Partnering with Disney on this program is an opportunity to carry out our ongoing mission to inspire, inform and empower."