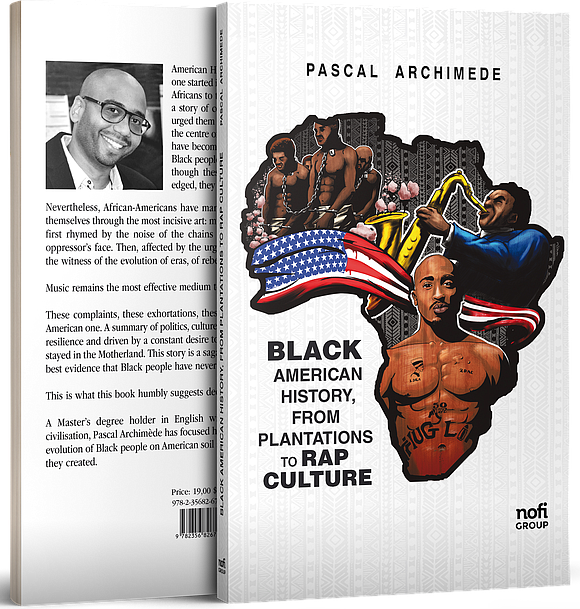 Pascal Archimede’s book “Black American History, from plantations to rap culture” (Nofi Group, 2018) is a quick tour through African American history. The book traverses a 300 yearlong trajectory of African American events and the people who made lasting impacts upon them. Ultimately, it ends with an examination of the culture of rap.

Written by a journalist/translator who was born in Guadeloupe, the book argues that rap music is one of the many strengths African Americans have created to sustain themselves in this country. Archimede said that because he has always been interested in music, he wanted to survey how African Americans have utilized music throughout their history.

“I’ve been living in Hollywood, Florida for almost two years,” Archimede explained in an interview. “I’m from Guadeloupe, a French speaking island located in the Caribbean. As a Guadeloupean, I’m aware that our fate is linked to the African Americans’ one. Why? Because our common ancestors––who were brothers, sisters, cousins, parents, relatives––were massively deported from Africa and were dispatched on various lands. We then all got isolated geographically, culturally, spiritually and of course linguistically. Our ancestors suffered from the same types of frustration and oppression before reaching a certain level of ‘emancipation.’ Just as an example, physical slavery got abolished in 1848 in Guadeloupe and in 1865 in the U.S.

“Today, a lot of French-speaking Black people, just like many African Americans, are treated and considered as second class citizens. Consequently, they have to fight to keep their heads above water, in a society in which nothing is made and designed for them. For all these reasons, we are interested in the evolution of our African American brothers and sisters, because––on the whole––we’ve been facing similar issues for a while!”

Archimede says he wrote “Black American History, from plantations to rap culture” for a general audience: it’s for readers aged 10 and up who want to understand Black history and Black music. The writing style tends toward the explanatory: you are made aware that the writer is looking from the outside in at the lives of African Americans:

“In the United States, everyone tries to reach that [American] dream,” Archimede writes: “As a result, many strategies are used to succeed. As far as the African American community is concerned, one of their visions of this Dream is visible through rap music.

“Escaping economic and material deprivation is a prevailing desire in that musical form. Rap lyrics often refer to money and its importance to survive in the United States. The piece “Money, Power, Respect” sung by Li’l Kim, DMX and The Lox, is symbolic because it gathers the three indissociable elements that form the young African-Americans’ dream. The pursuit of material wealth is also reflected in the metaphors of abundant living that dominate the lexicon of rap music.” (p.108)

Music has remained a major theme in the two books Archimede has written, “Music in professional language training” and “Black American History, from plantations to rap culture.” He published his second book with NOFI Group (www.nofigroup.com), a Paris, France-based Black owned media company. “NOFI is the contraction of ‘Noir et Fier’ which means ‘Black and Proud,’” Archimede noted: “NOFI aims for Black excellence by promoting Black culture worldwide. I’m working hand in hand with its founder, Christian Dzellat. Our target is to raise our people’s consciousness and to build bridges with all Black communities around the world, because we are aware that united we stand.”

Both of Pascal Archimede’s books are available on Amazon: