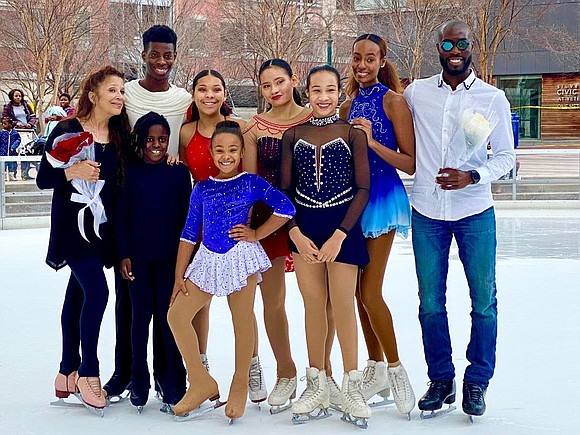 When the U.S. Figure Skating Championships get underway next week, there will be only two African American skaters in the competition, senior ladies competitor Starr Andrews and senior men’s competitor Emmanuel Savary. If Joel Savary, Emmanuel’s older brother, has anything to say about it, that will change in the years ahead. About three years ago he founded the Diversify Ice Fellowship & Foundation.

“When I was a skater myself I realized the hardships that my family had and that I had in the sport. It was very expensive. I worked while I was skating and going to school. I had really long days just to stay in the sport,” said Joel Savary, a former competitive skater who now coaches part-time and is the author of the book “Why Black and Brown Kids Don’t Ice Skate.”

In the book he recounts some of his experiences—which include hearing racially charged comments—and offers strategies for infusing diversity and reinvigorating the sport overall. He wants to see young skaters feel free to express themselves through costuming and music as well as speak up when they encounter negativity.

“I want to support the skaters who are coming up through the ranks competitively so they can have the opportunity to truly be competitive,” said Joel Savary. “Seeing skaters like Vanessa James, Maé-Bérénice Méité and Starr Andrews on the international stage is such a great motivator for the next generation. It’s important for young people to see people who look like them doing these great things so they can push the needle even further when it’s their time.”

“It’s really important for foundations, like DIFF and others that are in this space, to take that step and talk about the critical issues,” he added. “I want to escalate the conversation in the hope that things will change and we can not only help minorities in the sport, but also help propel the sport forward and increase its popularity…I want to get to the point where we see and develop champions.”