Off-the-shoulder styles are hits for spring/summer ’20 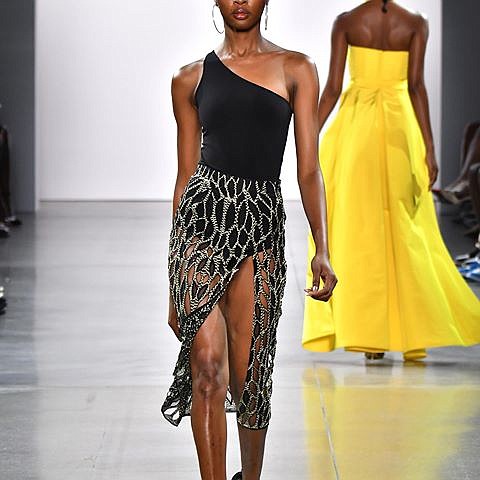 Whether it’s one shoulder styles, strapless looks or V-neck fashions, the brand Aliette showed amazing shapes at their first NYFW presentation for spring and summer 2020. Lengths were below the knee. Skirts with tapered. Shoulders were strong. Jason Rembert––featured stylist for this brand––presented some refreshing fashion looks.

At a young age, Jason exhibited a natural ability to create innovative ensembles. He had a dream of being a famous fashion stylist which he turned into reality while producing professional editorial pages for the world’s biggest magazines and newspapers. Today, Jason is an eminent, celebrity image maker who’s in a league of his own.

With a lack of resources, this African American, New York-based stylist began pursuing his passion by assisting on editorial shoots for Harper’s Bazaar, Elle and W magazines. Spontaneously, Rembert built relationships that opened doors. Behind those doors were opportunities for him to thrive and become a well-respected stylist in the industry. For him, the joy of styling lies in creating a well-executed image. Rembert’s goal is to distinguish his ability and maneuver through any and all obstacles in order to produce his best work. Jason Rembert’s styling work speaks for itself.

The Asian collection will be debuting their designers next month. This is another incubation project that’s produced and supported by Vantan, Inc, and Parco, LTD. They have invited budding designers from across Asia to compete for a chance at their own NYFW runway debut. Seven brands, from a variety of Asian countries, such as Japan, Korea, Taiwan and Thailand, will debut their fall/winter 2020 at AFC’s 7th annual event. AFC is passionate about widening the reach of the fashion industry by fostering the growth of the continent’s moment up-and-coming designers.