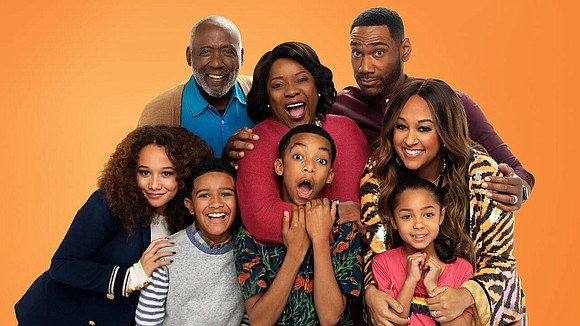 The Cast of "Family Reunion"

She is only 18 years old and a hard-working actress and the star of Netflix’s “Family Reunion.”

Her voice is mature and her outlook on the industry and life is equally mature. In a few words, she’s impressive. She’s a part of Gen Z Hollywood and considered a rising star of her generation and included in the same conversation with names like Zendaya, Yara Shahidi and Amandla Stenberg. Plus, she has that singing edge that shoots Jackson to the cool factor.

In Netflix’s hit multi-camera comedy “Family Reunion” (the second half of season 1 premiered on Monday, Jan. 20) Jackson stars alongside Loretta Devine as Jade McKellan, the oldest daughter of Tia Mowry-Hardrict’s character, from veteran showrunner Meg DeLoatch (“Family Matters”). Season 1 of “Family Reunion” follows the McKellans as they stick it out in small-town Georgia with even more antics. From a wedding and boyfriend drama to a step showdown and sibling squabbles, the party’s just getting started. This season, Talia’s character will tackle social norms and showcase her vocal prowess with the debut of Jade’s new single, “This is Me,

Jackson was born in Wisconsin but moved with her family to Santa Barbara at the age of eight to begin pursuing her twin passions of acting and singing. When she’s not in front of the camera, Jackson values spending time with her younger brother Armani Jackson, also a working actor (Netflix’s “Little Boxes”), volunteering with animal rescue organizations and lending her voice to the Global Lyme Alliance, an organization dedicated to conquering Lyme disease, an illness which she has been suffering from since she was 13 years old.

Here’s what Jackson had to share about being a working actor in Hollywood, dealing with Lyme disease and why she values family.

Amsterdam News: What’s it like working on Netflix’s “Family Reunion” and with Meg DeLoatch? She is a very experienced creator and executive producer and I love that she has assembled an all-Black writer’s room in an effort to bring authenticity to the multi-generational McKellan family.

Talia Jackson: She is. She truly is. It’s great to be a part of the Netflix family. In my opinion, it’s one of the best places to work with because they allow you to do so much in your separate life from the show because Disney and Nickelodeon sometimes they restrict you from doing things. Especially when you’re 18 you kind of want to be an adult but you can’t. Netflix, our show is kids and families but they allow us to bring up deeper topics that other kids and family shows would not get to talk about. They would try to make it kid-friendly and I think, in this day and age, kids should know everything that’s going on in this country and this world. Netflix is open to having big conversations. And their events are so much fun.

AMN: If I may be so bold, what is your ethnic mix? I’m African American, Native and Mexican.

TJ: I am African Amerian and Lithuanian. My father is Black. My mother is Lithuanian.

TJ: I was diagnosed with Lyme disease a year and a half, two years ago. It comes from a tick who carries Lyme; it’s more complicated but it’s easier to understand the disease this way. My mother was also diagnosed with this disease as well. My family and I are working with them [Global Lyme Alliance]. This organization is dedicated to conquering Lyme disease.

AMN: Great. You are great. I wish you luck in every endeavor. Enjoy being 18 years old, Talia Jackson.