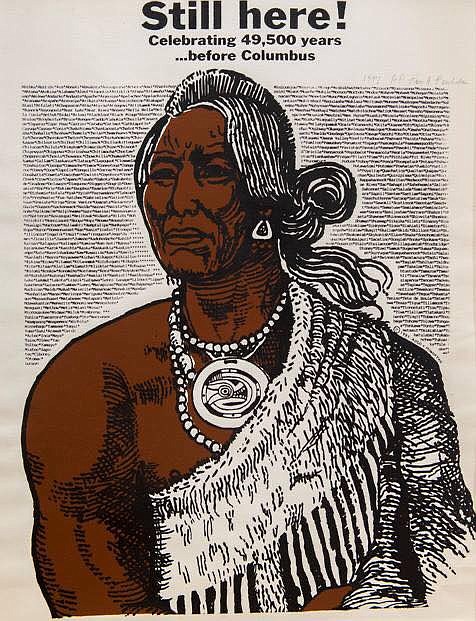 Steve Prince, who has several pieces in the exhibition, is Muscarelle’s director of engagement and 1619/2019’s co-curator (along with Danielle Moretti-Langholtz and Melissa Parris).

Prince spoke with the Amsterdam News explaining that one of the messages he wanted to get across with 1619/2019 was the fact that slavery didn’t just happen to Africans. The lands that the stolen Africans were eventually forced to till, once belonged to Native Americans and were systematically stolen from them. Slavery transformed and connected the global economy, culture, and ecosystem.

Compact yet powerful, 1619/2019 includes works in a number of styles and media to evoke the experiences of transport of the West Africans over the Atlantic, through the experience of slavery. It also seeks to highlight the intersection of the slave experience with that of the Native Americans whose land was stolen, and then worked by people stolen from their own homeland.

Our conversation was all the more poignant since we stood a mere thirty miles from where the first documented enslaved Africans landed, at Old Point Comfort in Hampton, Virginia. “We wanted to say slavery in America mainly affected Africans turned Americans,” Prince explained, “but we also wanted to look at the lineage of atrocities that took place in this nation. And so you would have to include in that Native American body within that narrative.”

So many artists had submitted their work to be included, the museum had to make some hard choices. Ultimately, it came down to whether, Prince explained, “their work wasn’t just focused on pure abstraction or emotive ideas but dealt with [the era of slavery], and its pain, but also the love and the beauty.”

Much of the work is gut-wrenching. Preston Jackson’s bronze rendering, “Protecting Assets,” depicts a pregnant enslaved girl forlornly hovering over a patch of mud into which she was apparently thrown and from which she has just arisen. The mud still bears the imprint of her swollen belly.

Deftly bringing together multiple cultural touchstones is Sonya Clark’s stunning and surreal “Gele Kente Flag.” The cloth from which the piece is made is Ghanaian kente. Of course, the gele is a type of headwrap worn by women in West Africa. The flag it evokes is American, as is the loom upon which it was woven.

Bunky Echo-Hawk, with “Freshman,” delivers a playful yet cerebral acrylic on canvas of a Powhatan sporting a shirt that simultaneously hearkens back to a pre-Colombian America where corn was revered, and today’s America where corn syrup wreaks havoc on the health of poor people of color.

Also very thought-provoking is the Dadaist-influenced reimagining of the ironing board in “Savannah, Dot, Fannie Mae, Queen, Anna Mae” by Willie Cole, a School of The Visual Arts graduate whose work often includes tools

Former Princeton University professor turned artist Nell Painter’s moving Conté crayon and graphite on paper work entitled “If God Has Bestowed Beauty,” about the trauma of sexual violence for the enslaved girl or woman, is created using text from “Incidents In The Life Of A Slave Girl,” one version of which Painter edited.

One of the most striking pieces in the exhibition is a life-sized wood cut-out by Prince, of a man holding a fish with the face of a human. “That’s also a reminder,” Prince explains referring to the voyage of the enslaved across the Atlantic, “of what’s embedded within these oceans. The millions of people who never completed the voyage, who were thrown overboard because of insurrection or death, those who jumped, trying to escape to freedom. They became food for the fish. There are so many bones on the bottoms of our oceans.”

Spanning almost the total length of one wall is arguably the pièce de résistance of the exhibition; “The Links Steamroller Print.” An extraordinary symbol of the global collective imagination, it evokes, on viewing, a different emotion seemingly from one second to

A yearlong art project led by Prince, hundreds of people from various age groups and nations including South Africa, Vienna, and Hungary were engaged to use power tools to create small woodblocks that were inserted into a large-scale, puzzle-like matrix to “link” the individuals. The culmination of this project was the public printing on the grounds of William and Mary University, where the Muscarelle is also located, with an industrial steamroller.

Again, it is meant to be a symbol of the collective global historical connection because of slavery. Prince explains, “Everyone was asked to deal with that past, our present, or our imagined future. I wanted it to be a symphony of voices of our collective community. All those pieces represent hundreds of people working together to create one single voice, one single link or really, multiple links turned into one.”