The Knicks plot their course ahead of the NBA trade deadline 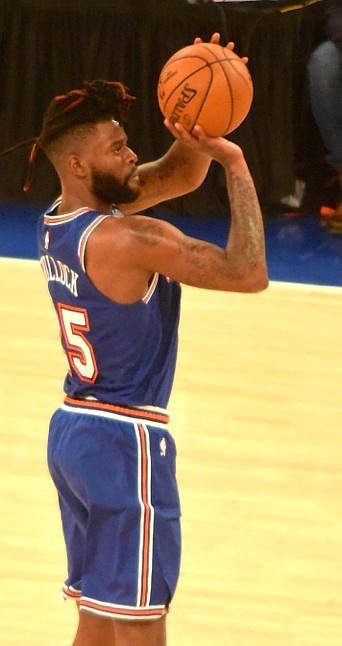 Prior to the Knicks hosting LeBron James and the Lakers last night (Wednesday) at Madison Square Garden, they were 12-32. After defeating the Cleveland Cavaliers 106-86 on the road Monday on Martin Luther King Jr. Day, they were tied with the Cavaliers for the third worst record in the NBA.

Knicks owner James Dolan has not made any public statements this season regarding the job security of team president Steve Mills and general manager Scott Perry. Since Mills and Perry assumed their current positions with the Knicks organization in July of 2017, the team’s record—not including last night’s result—is 58-150. It is uncertain if Mills and Perry have the latitude to make trades and even more suspect they have the autonomy to deal any of the Knicks’ young assets such as Frank Ntilikina.

Yet Marcus Morris Sr., Taj Gibson and Reggie Bullock can be impactful additions to several teams, and their contracts are favorable for both the Knicks and a trade partner possessing assets that can aid the Knicks’ rebuild. Morris is on a one-year, $15 million deal. Gibson only has $1 million guaranteed on his $9.45 million contract for next season if he’s waived before June 28. Same for Bullock, who has a $4.2 million contract for the 2020-21 season.

Additionally, Wayne Ellington may not be a Knick much longer as he could land with a team looking for perimeter shooting. His $8 million salary for next season is structured the same as Gibson’s and Bullock’s contracts. Even if the Knicks’ roster remains as is past the deadline, they must get a more definitive read on Ntilikina, Knox, Dennis Smith Jr. and Allonzo Trier.

While Ntilikina, 21, and Knox, 20, are firmly part of head coach Mike Miller’s rotation albeit with an uncertain future in the franchise’s long-term plans, Smith’s place with the Knicks is much more dubious. He has played in only 21 games this season due to a back injury, the sudden death of his stepmother in late October, and his latest injury, a strained left oblique that has kept him sidelined since he last played on December 23 against the Washington Wizards.

When Smith, 22, who the Knicks acquired last February from the Dallas Mavericks in the polarizing Kristaps Porzingis trade, has been on the court, he hasn’t shown consistent ability to run the offense as a point guard and seems destined to be a scoring combo guard. As for the 24-year-old Trier, he was a revelation last season as an undrafted free-agent. Initially signed to a two-way contract, the Knicks eventually bestowed Trier a two-year, $6.933 million deal, the most ever for a player coming off a two-way contract.

He then had a promising rookie year, displaying proficient skill scoring in isolation matchups. Trier ended his first year in the NBA playing in 64 games, averaging 10.9 points on 45% shooting overall and 39.4% on three-point attempts. But he hasn’t evolved in Year 2. Trier has labored defensively and been adrift playing in a motion oriented offense in which ball and player movement are stressed. Heading into last night, he had appeared in just 20 games averaging six points per outing.