Rapper Dave East goes back to Harlem for the youth 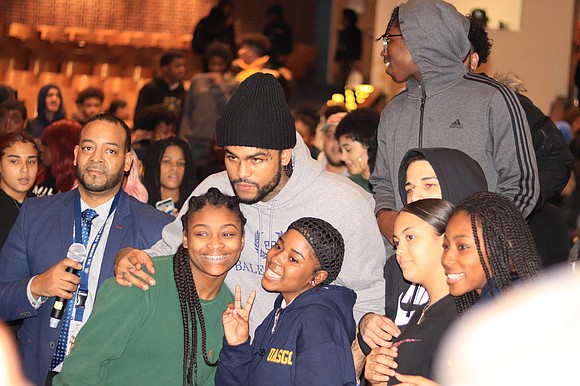 Last week rapper Dave East visited East Harlem’s High School, Urban Assembly School for Global Commerce to talk to the students about his journey to success, as well as answer their questions pertaining to his life before and after success.

“Dave represents and skillfully chronicles a story of struggle, hardship and triumph similar to that of our students,” stated the school’s principal, Roony Vizcaino. “Through his art form students are inspired to hustle and succeed. The visit was inspirational and important for our community.”

East was born on June 3, 1988 in New York City, Harlem to a Dominican mother and Bajan father. Before becoming a professional rapper, he was a basketball player. East gained recognition from his consistent mixtapes and was signed by the Queens rapper, Nas, in 2014 to Mass Appeal Records. In 2016, East joined Def Jam Records as he continued to release successful mixtapes. However, reaching his level of success did not come with ease.

“It was a grind. It wasn’t easy for me. I wasn’t born to a rich family...It wasn’t easy, but I feel I had the love from him and that’s what made me keep moving the way I was trying to move,” said East. “I feel like it was important to come to a high school in Harlem because I feel like I could relate to y’all more than anywhere else in the world... I was excited to get up this morning to come talk to y’all.”

Urban Assembly School for Global Commerce is a High School that aims to help its students thrive globally by becoming familiar with different cultures and the diversity of this world. They offer advanced programs and curriculums for their students who receive in-depth help from teachers since the classes are small in size.

“I never really looked at myself as a role model, that’s dope. But I have a daughter now, she’s three. So since my daughter was born I feel like my influence is a lot stronger than I thought and I have to really watch how I move, watch what I say, watch who I’m around because more than ever I feel like there’s a lot of people younger than me who are watching what I do and seeing how I came in the game,” says East.

Most of the students at Urban Assembly School for Global Commerce are children of immigrant parents, mostly immigrants of color, who want to make life for their parents here in America easier. One of the students, a female from Ivory Coast, talks about wanting to build affordable housing for people back home as well as for people here in Harlem. Another student of Jamaican descent talks about wanting to build generational wealth for his children as well as making his parents proud to finally achieve the “American Dream.”

In collaboration with Urban Assembly School for Global Commerce to organize this event were; Hustler’s Guild, Def Jam Records, Champions for Philanthropy and Mass Appeal.