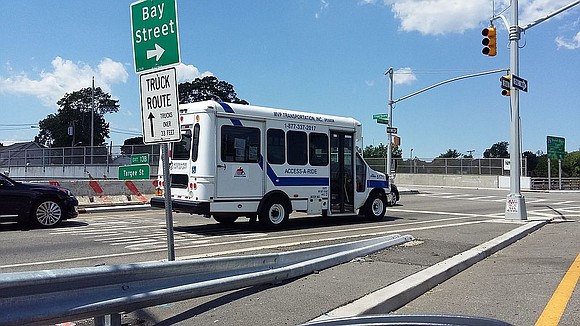 Expansion of the Fair Fares program went into effect on Jan. 27. The initiative makes hundreds of thousands of low-income and working class New Yorkers eligible for reduced-fare MetroCards. Fair Fares is designed for the city’s most underserved communities to travel, without worrying about money, to and from their jobs.

Any New Yorker at or below federal poverty line is eligible for half-off MetroCards. The poverty line for a family of four is $25,750 in annual income and $12,490 for a household of one.

However, if you ask Access-A-Ride users, Fair Fares is better off not existing.

Access-A-Ride provides paratransit services to New Yorkers with disabilities so they don’t have to use subways or public buses, but they’re not included in the Fair Fares program. Among the many public transit options in the city, Access-A-Ride has a reputation for being the least reliable. Riders must pay the full $2.75 fare, in cash, for each trip.

Daniel A. Ross, Esq. of Mobilization for Justice, Inc. said that they’ve been pushing for the de Blasio administration for most of 2019 to include this ridership in the Fair Fares program and not leave disabled New Yorkers and the elderly out in the cold.

“Mobilization for Justice strongly supports the goal of the Fair Fares program to make public transit more affordable for low-income New Yorkers,” said Ross. “But, as we have urged the city for a year, now, the program must not exclude New Yorkers who rely on Access-A-Ride simply because they’ve already been excluded from buses and subways.

“These riders—many of whom are excluded from employment and rely on low fixed incomes—are least able to bear the cost of their transportation needs,” continued Ross. “They would benefit greatly from Fair Fares, and it’s deeply troubling—and illegal—that the city has thus far chosen to exclude them from this important program. While we are pleased that HRA is investigating ways to add Access-A-Ride to the program at some point in the future, these riders need this program now.”

According to the New York Lawyers for Public Interest, this exclusion disproportionately affects marginalized people. Thirty-five percent of people with disabilities in the city live below the federal poverty line. For Black New Yorkers with disabilities, the number is 38 percent and for Hispanic/Latinx New Yorkers, it’s close to 46 percent.

“We believe that’s a big issue because we rely on affordable transportation and it’s essential to maintaining employment, access to health care and for senior citizens to engage in social activities,” said Schuyler. “Access-A-Ride is the only option available.”

“We’re broadly working with many kinds of groups and closely connected to communities affected by the decision to leave Access-A-Ride off the Fair Fares program for now,” said Schuyler. Fundamentally, it’s a huge problem because poverty and employment are high among people with disabilities.

Other entities have claimed they’re working with each other to resolve the issue with Access-A-Riders too.

When asked how they’re going to address the Access-A-Ride issue, the de Blasio administration and the MTA said that they’re collaborating on improving the program.

“Public transportation is important to the daily lives of New Yorkers, and we are working with the MTA to identify options for Access-A-Ride users who would qualify for Fair Fares,” said a City Hall spokesperson.

“While Fair Fares is a city-run program, we’re invested in the accessibility of our services and continue to work with NYC to have Access-A-Ride customers be able to participate in the Fair Fares program,” added an MTA spokesperson.