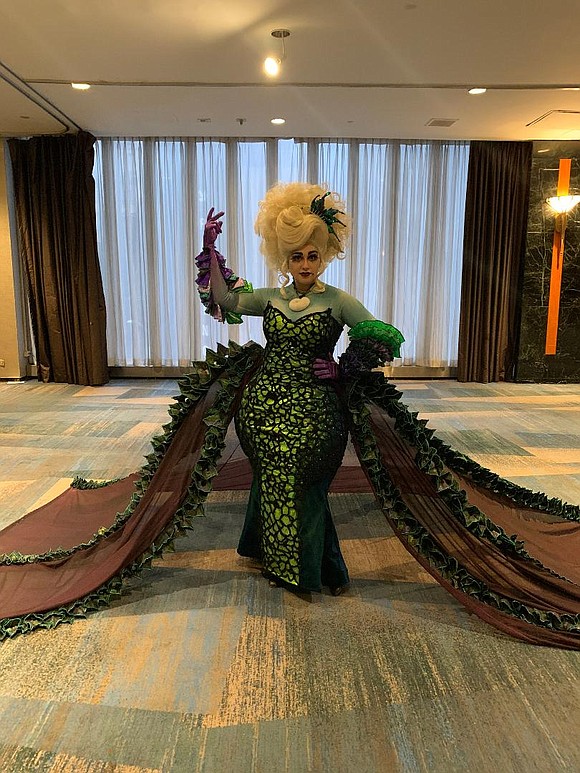 The weekend of Jan. 24-26 was a theater-lover’s dream as the fifth annual BroadwayCon 2020 took place at the New York Hilton Midtown. Presented by Mischief Management, it was a place to find people in full costumes of characters from their favorite Broadway show, such as “Frozen” and “Wicked.” It was also a space to participate in sing-alongs for Disney shows and a host of other Broadway musicals. There were countless panels with the casts of the hottest shows currently on Broadway including “Dear Evan Hansen,” “Hadestown,” “Jagged Little Pill,” “SIX,” “Beetlejuice,” “Moulin Rouge,” “Harry Potter and the Cursed Child,” “Mrs. Doubtfire,” “Girl from the North Country,” “Caroline or Change,” “Company,” “Sing Street,” and off Broadway shows like “Between The Lines.” There were singing competitions in the vendor Marketplace with Harmony Helpers Live, where hopefuls could sign up and sing for judges who were performers from an assortment of Broadway musicals—past and present. The Marketplace offers fans Broadway themed t-shirts, bags, door hangers, shoes, costumes, musical production CDs, pins and stickers. An assortment of schools in the arts were on hand such as AMDA. There were stations to take free photos in costumes from musicals like “Oklahoma” and to give autographs.

The energy, creativity, honesty, love and spirit of BroadwayCon 2020 were in every part of the New York Hilton from the 2nd-4th floors. It was a place to see director Kenny Leon from his current work, “A Soldier’s Play” on Broadway, participate in a director’s panel. It was a place to see LaChanze and Brenda Braxton participate in panels. It was a place to walk down a hall and hear someone singing in front of a friendly crowd of strangers their favorite Broadway tune. There was such a feeling of joy and appreciation for what Broadway means to all of us, everywhere you went at BroadwayCon 2020. It is something I put on my to-do list every year.

If you are part of the industry or just a lover of it, you get a full taste of what it takes to make things happen. There were panels on playwrighting, stage management, dance workshops. There was a Hal Prince Legacy Singaglong.

There were so many events one could not experience everything. I had a wonderful time at the “Dear Evan Hansen” panel that featured Jordan Fisher, who will be taking over the lead role of Evan Hansen, and Andrew Barth Feldman, who is currently in the role and about to complete his performances. Feldman made history as the youngest person to play the role and Fisher is making history as the first African American to play the role. “Dear Evan Hansen” is a deep musical about teenage suicide and the character in the lead role has many personal issues that he deals with. Both Fisher and Feldman shared that they understand and appreciate what the character is going through. Feldman remarked that Evan Hansen is someone he says goodnight to every night. Both actors shared that they got their training and love for the business as youngsters in elementary school and attended performing arts facilities. They talked of their love and passion about this industry.

The “Hadestown” panel featured two lead actors Reeve Carney and Eva Noblezada and the ladies who play the featured roles of the three Fates—Yvette Gonzalez-Nacer, Kay Trinidad and Jewelle Blackman. The musical is part of Greek mythology with the gods Hermes and Hades, the Fates, Orpheus and Euripides. The cast was very candid as they discussed the hard work that goes into performing this show eight times a week. Blackman shared she had a very short time to learn to play the accordion. The cast shared the development process that the musical went through on its way to Broadway. “Hadestown” is completely sung and the majority of the cast is on stage throughout the show, which lasts 2 hours and 40 minutes. The cast talked about how they stay hydrated when they are performing so much. When the work is done, most shared that they get Uber Eats, Seamless, binge-watch shows or just knock out and go to sleep.

This year I had the pleasure of being a panelist on “Dark Views: When People of Color Review the Great White Way,” moderated by Keith Price—“Curtain Call.” Other panelists included Jose Solis, New York Times, and Irene Gandy, press agent extraordinaire. We talked about the challenges of covering Broadway and the delight.

I moderated three panels this year. On Saturday I did a Black LGBTQIA playwrights panel with Jordan E. Cooper and Keelay Gipson and it was fabulous. They talked about their plays, the importance of expressing themselves through their writing and their need to let their voices be heard. They talked about being inspired to write pieces from their personal lives that affected the LGBTQIA community. They talked about what is it like to be a Black gay man in this country.

The next panel I moderated was “Black Broadway Movers and Shakers: Black Lead Producers” and for that panel I had the only two Black lead Broadway producers—Stephen Byrd and Alia Jones-Harvey of Front Row Productions, currently producing “Ain’t Too Proud: The Life and Times of the Temptations.” They have also produced all Black version of “Cat on a Hot Tin Roof,” “A Streetcar Named Desire,” “A Trip To Bountiful,” “Eclipsed” and a biracial “Romeo And Juliet.” They generously shared with the audience what the job of a lead producer is and we found out that a lead producer has hands in every single aspect of a production from picking the story, to casting the actors, to picking the director, technical people, advertising people, raising the money to fund the show, and securing the theater. And what is so wonderful about Byrd and Jones-Harvey is that they actively make sure that people of color receive those jobs. They are not only saying that people of color should get these opportunities—they are making it happen. Whether working on mounting a show on Broadway or in London’s West End they are putting ads in the local papers to let people of color know that the opportunities are there for costume designers, lighting designers, and other technical roles, along with everything else involved with mounting a production. They actively work to make sure that not only the stage reflects people of color but that they can also be found behind the scenes.

The third panel I did was “Stellar Dramas to Broadway Musical: Black Female Playwrights” which featured three playwrights. Lynn Nottage, who wrote Pulitzer Prize winning plays like “Sweat,” “Intimate Apparel” and “Ruined,” is now working on her first musical, “MJ: The Musical,” while also making her play “Intimate Apparel” into a musical for Lincoln Center. Katori Hall, who wrote “Hurt Village,” “Hoodoo Love” and “The Mountaintop,” is now on Broadway with “Tina: The Tina Turner Musical.” Actress Michelle Wilson came to represent Dominique Morriseau, who wrote “Pipeline” and “Detroit 67” and now has “Ain’t Too Proud: The Life and Times of the Temptations.” These ladies talked about what their journey was to become playwrights. Hall stating that she was an actress who found that there weren’t plays for her to do, until she finally discovered a Lynn Nottage play. She also shared that Nottage is her mentor and gave her her start, when she submitted “Hoodoo Love” to a writing competition that Nottage was connected with and she got the call that Nottage chose her play. “I remember crying that day, because when I got the call I knew my life was going to change.” These playwrights shared how their stories come from the real human traumas that are happening, such as people in a factory town and what happens to them when the factory closes, the story of “Sweat.” A story Nottage wrote after she spent two and a half years in the town of Redding, Pennsylvania and got to know the people there and talked to them about how their lives were devastated when the manufacturing jobs were gone. Wilson, being an old friend of Morriseau and a native of Detroit, like the playwright, talked about how Morriseau wanted to write stories about her people and how growing up with the music of the Temptations made it easier for her to put together a musical which would be a tribute to this music. Wilson, who performed in both “Detroit 67” and “Sweat,” spoke about the depth of the works of these playwrights and how as the actors performing these pieces you realized the importance and meaning of these very serious, important works to the audience. Hall talked about creating work and saying things in her own way, as she did with “The Mountaintop” in which she wrote about Dr. Martin Luther King Jr., but not in the typical way. She also talked about her play that’s about to open at Signature Theatre, “The Hot Wing King” and the process of writing and rewriting it. All the panelists agreed that it is very hard work to write a play and that the process for each play is unique.

Please make plans to go to BroadwayCon 2021 and enjoy.