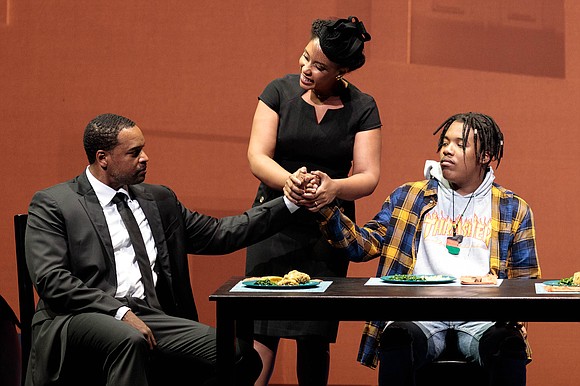 More than a month prior to the wrenching viral video of George Floyd being killed by Derek Chauvin, which caused worldwide reverberations to our social fabric, the prestigious Music Critics Association of North America (MCANA) decided to grant Playwright and Director Tazewell Thompson the award for Best New Opera for “Blue,” a production for which Tazewell made his debut as a librettist. His co-recipient was the opera’s composer Jeanine Tesori. The decision wasn’t announced though, until early June.

A lifelong Harlemite, Thompson told the Amsterdam News, “It’s a theme and a subject that unfortunately, will always be relevant. I’m excited and happy that ‘Blue’ has been this major triumph. It’s just extraordinary. I’m hooked now, I’m ready for my next opera!”

MCANA’s Best New Opera award was created in 2016 to honor musical and theatrical excellence in a fully-staged opera that received its world premiere in North America during the preceding calendar year.

With a title whose simplicity is dramatically contrary to the weight of all it symbolizes, Blue tells the tale of a Black American family––with a policeman as its patriarch––rocked by the murder of their teen son by a fellow officer.

The New York Times’ Anthony Tommasini wrote that “Blue” featured “one of the most elegant librettos I’ve heard in a long time.” It got similarly high praise from Soraya Nadia McDonald of the sports and pop culture website The Undefeated, saying it “demands a place in the American operatic canon.”

Almost no one has gotten to see “Blue” since it made its debut at the Glimmerglass Festival in Cooperstown, NY last summer. “When the coronavirus hit, it was about two days from the opening at the Kennedy Center and we had to shut down,” Thompson explains.

Tazewell wasn’t originally supposed to be the person who wrote the opera, but was inspired with the offer to do so by the events of the summer of 2015.

“What about me?” was his response when the director of the Glimmerglass Festival emailed him that fall seeking his opinion on her list of prospective librettists for an opera dealing with “race and social justice” she was commissioning.

He states, “The first thing that came to me was the killing of unarmed Black boys and Black men. That summer was tough in terms of boys and men being killed by police officers so there was no need for me to even think about what the subject would be. I felt it was important for me to offer my voice. I didn’t think of it as a cause then, or as a protest opera, but now it has become one.”

Thompson has been writing since he was a teen attending the High School of Art and Design. He left his junior year after getting a part in a play on Broadway and hasn’t stopped working; writing and directing plays performed all over the globe.

The compactness of writing a libretto was the biggest challenge for him. “With a libretto, you need to find a way to express the emotion but it has to be edited down because the music has to be allowed in to support and expand on the emotions’ content.”

Thompson doesn’t have first-hand experience with police violence but says, “Me and people I know in the neighborhood all had encounters with police officers; followed in department stores, stopped in the street. It’s pretty scary.”

Thompson, who counts James Baldwin and Toni Morrison as his favorite writers, was mainly interested in making sure he created a nuanced depiction of the family, eschewing use of the familiar pathologies that have become a crutch for audiences seeking a way to connect to the humanity of Black characters, Black life, Black stories. “I wanted to write about a whole Black family. I didn’t want to write about a single mother. I didn’t want any of them to be criminals or drug addicts or recovering alcoholics. That’s been done.”

The family in “Blue” aren’t named except as The Mother (Briana Hunter), The Father (Kenneth Kellogg), The Son (Aaron Crouch). The son is an activist against police brutality. “He’s like the young kids out in the streets now, marching and protesting,” says Thompson.

The parents have a support system extending out into the community, fortifying the family unit. “To me the story is, what happens to the family, to the community, to the church? How do they respond when a young boy who had all kinds of possibilities in life is killed in their neighborhood?”

Thompson was careful to draw a detailed portrait of the family and community: “Girlfriends gathered around the mother-to-be, concerned that she’s having a boy… the boy an activist, poet and artist… the dad with his police buddies having a celebratory drink after his son’s birth… the mother and father holding the newborn in the hospital… the father and son not agreeing on anything.” Universally resonant snapshots of life.

Thompson’s instinct paid off. He describes sitting in the audience in the conservative hamlet of Cooperstown, NY during one of the opera’s few performances. “I sat at the back of the opera house on a bench,” he recalls. “My heart was in overdrive beating against my chest. I thought I was gonna pass out. When I got up to go backstage for the curtain call, the audience was in complete silence. And then I could hear some sniffles. Then people were crying. Then, the roar of applause.”