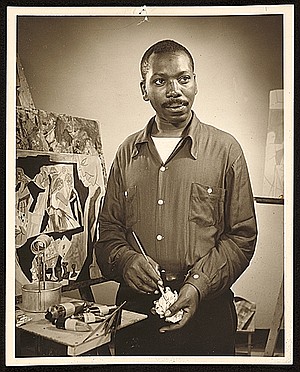 As we noted last week Dr. Olivia Hooker gained most of her fame as a survivor of the Tulsa Race Massacre of 1921, but she earned another distinction as the first African American woman enlisted in the Coast Guard. Jacob Lawrence was a phenomenal artist, who, like Dr. Hooker, has among his credentials a tour of duty in the U.S. Coast Guard, though he was not the first Black man in this military unit.

Lawrence, however, was the first African American, as a stewards mate in the Coast Guard, to be appointed a Combat Artist. During this stint in the military, he published “Another Patrol” that was part of his “War Series” collection in 1946.

But long before he donned a uniform, Lawrence had already established himself as a notable artist, particularly with his “Migration Series” panels completed in the early 1940s. Born September 7, 1917 in Atlantic City, New Jersey, Lawrence was the eldest child of Jacob and Rosa Lee Lawrence. His father worked as a railroad cook and when Lawrence was two the family moved to Pennsylvania. Lawrence was seven when his parents separated and by the time he was 12 his mother and his siblings were settled in Harlem.

Lawrence received his first introduction to the arts as a student at the Utopia Children’s Center, which was a settlement house with an afterschool program in arts and crafts. The renowned artist Charles Alston was the center’s director and he immediately recognized Lawrence’s talent.

As a student at P.S. 89 and in the classes at Utopia, Lawrence cultivated his artistic interests and skills, especially in making diorama type paintings from corrugated cardboard boxes. These endeavors, along with painting, continued when he enrolled in Commerce High School. Like so many Americans, particularly Black Americans, the Depression brought a halt to a lot of aspirations and job opportunities. After his mother lost her job, the family was forced to go on welfare. Lawrence dropped out of school before his junior year in order to help his family.

One of the jobs he secured was with the Civilian Conservation Corps, one FDR’s New Deal programs to assist impoverished workers. His assignment included the planting of trees, draining swamps, and building dams. Upon his return to Harlem, he became associated with the Harlem Community Art Center that was directed by the remarkable sculptor Augusta Savage. The Center was a gathering place for a number of aspiring and prominent artists and intellectuals, and Lawrence took full advantage of the company, several of whom guided him to a wellspring of African American culture then on display at the Schomburg Library.

Besides Savage, Dr. Charles Seifert, widely heralded as “The Professor,” was among the coterie of scholars and mentors Lawrence embraced, each of them providing the instruction and education he needed to begin his own cultural pursuits. The great Haitian revolutionary Toussaint L’Ouverture was a subject that Lawrence found irresistible, so much so that he was depicted in a series of panels. In 1937, he produced 37 panels of the general at war during the Haitian Revolution.

L’Ouverture was the opening that led to Lawrence’s extensive panels on such significant African Americans as Harriet Tubman and Frederick Douglass, who were forerunners to his famous “Migration Series.” The legendary militant abolitionist John Brown, Harlem, and a history of African Americans were also panels that Lawrence captured in great detail and brilliance.

In the early 1940s when Lawrence first exhibited his “Migration Series” in downtown Manhattan the reception was widely praised and the 24-year-old artist was on his way to top recognition. He gained even greater popularity when various publications began featuring his panels. There were even critical notices for his “Harlem Series,” which some deemed more appealing than the “Migration Series.”

At the time he was completing his panels on the Haitian Revolutions and Toussaint, Lawrence was the recipient of a scholarship to attend the American Artists School in New York City. This arrived simultaneously with a Rosenwald Grant, which he was to receive for three consecutive years. This good fortune, however, was interrupted by World War II and his military service but his progress as an artist continued to grow. And it would get a dramatic boost in the summer of 1947 when he was invited to teach at Black Mountain College in North Carolina.

Two years later, Lawrence was a patient at Hillside Hospital in Queens, apparently to be treated for depression brought on by his success and that he had left so many of his colleagues behind. The temporary confinement presented him another opportunity to express his artistic genius in a series of panels called “Hospital.”

After the hospitalization and the successful treatment, Lawrence zoomed into high gear for the next decade, and by 1960 he was honored with a retrospective exhibition and monograph prepared by The American Federation of Arts. This prestigious moment was followed by travel to Nigeria and then a succession of teaching appointments at such institutions as the Art Students League in New York City, Pratt Institute, and the School of Social Research. In 1974, the Whitney Museum of American Art presented a retrospective of his work that later toured nationally. He was elected to the American Academy of Arts and Letters in 1983.

Through all of these achievements, Lawrence was often accompanied by his wife, Gwendolyn Knight, an accomplished artist whom he had known since they were teenagers in Harlem and active in the “306” Studio. He was 82 when he died in Seattle, Washington on June 9, 2000.