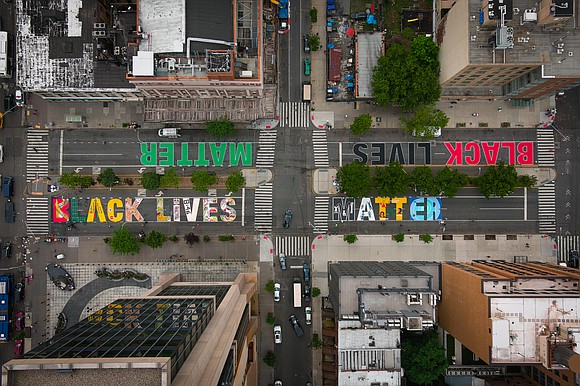 The 16 letters which spell out ‘Black Lives Matter’ were each assigned to 10 people. This totals up to about 160 people who contributed to painting the mural from the community. Evans-Hendricks described working with the different artists as an incredible part of the painting. “They each have very different artistic styles,” she mentioned. “It was an interesting process talking to them and what their visions were and how they were all going to come together.” This Harlem mural gave many artists a significant platform to display their work. Guy Stanley Philoche is honored to be involved with this historic moment in history.

“I was honored and frankly eager to give back in some small way, to be a part of history, my history,” said Philoche, a Haiti-born New York City based artist. He credits his contributions to this mural as his legacy. His artwork has been shown internationally, yet he described painting the Black Lives Matter mural as just as prestigious as his overseas work.

“It was more important for me to get this mural right to convey the significance and brevity of this movement,” he explained. “I felt I must honor it as best as possible; it was beyond emotional.”

Ferrer is thankful to the Amsterdam News for our wide variety of stories about the Black community and continuing to humanize Black people. She additionally expressed how people should not become complacent with murals and cease actions against injustices. “The murals don’t destroy the systems that destroy us,” she said. “We have to remember that the work to end systematic racism is what matters.”