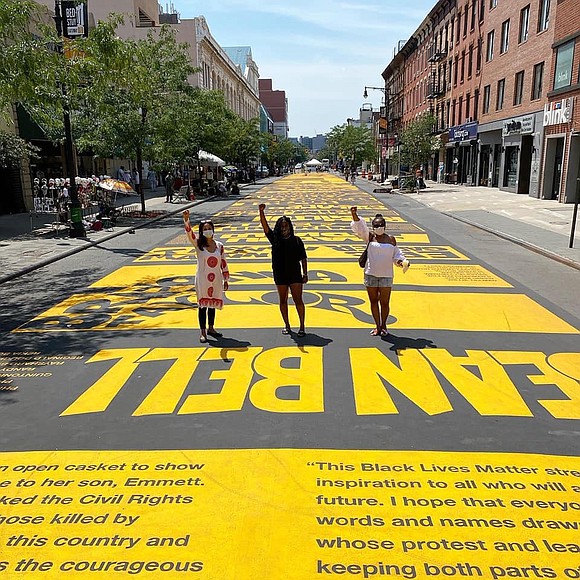 Sean Bell, a 23-year-old father of two, was out in Queens celebrating on the night before his wedding, when plainclothes and undercover cops unleashed a hail of 50 bullets, gunning him down and wounding his two friends Joseph Guzman and Trent Benefield on November 25, 2006. In a real grassroots groundswell, over a couple of years thousands took to the streets before and after the acquittal of the three cops charged with manslaughter.

This past weekend, Nicole Paultre Bell, his fiancée who fought courts to claim his name, visited the Black Lives Matter mural painted on the Bed Stuy, Brooklyn Fulton Street thoroughfare.

Alongside these names of unarmed Black people killed by police and historical racists is that of Sean Bell.

Powerful is the visual of this young woman who has become a tireless activist, as she has built and maintained her family. Poignant is the picture as she stands by the sign of the father of their two daughters with her mom, Laura, and Dr. Indira Etwaroo, executive director of The Center for Arts and Culture at Bedford Stuyvesant Restoration Corporation.