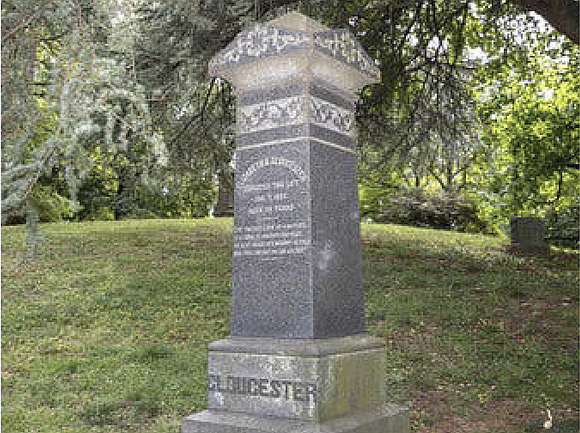 Her gravestone is in Green-wood Cemetary in Brooklyn

Invariably around this flip of the calendar and the 4th of July, the great abolitionist and statesman Frederick Douglass commands attention, particularly for his memorable speech that centered on the nation’s hypocrisy, asking what the day means to enslaved people.

It’s also a moment to evoke a few of Douglass’s associates who, like him, were unstinting in their fight to end slavery. Among the couples that come to mind is Dr. James and Elizabeth Gloucester. Her husband is often the recipient of the salutes to the family, but Elizabeth was equally committed as a stalwart in the liberation of Black people. She devoted considerable time and resources to fugitives from bondage via the Underground Railroad and otherwise.

Elizabeth amassed immeasurable financial clout and at one time was one of the wealthiest Black women in America.

Born free in Virginia, her birth surname was Parkhill and at six years of age, following her mother’s death, she was a resident of Philadelphia. Realizing she didn’t have long to live, her mother made arrangements for Elizabeth to live with the Rev. John Gloucester, founder of the first Black Presbyterian Church in the U.S. She became a member of the Gloucester household, amid a brood of ten other children.

At the age of 21 she worked as a domestic for John Cook, a prominent Philadelphia Quaker. There came a time when she became reacquainted with James Gloucester, John’s son, and after a brief courtship they were married in 1838; the same year Douglass arrived in New York City as a runaway slave. The Gloucesters were a dynamic duo; he was a teacher and from a frugal saving, she opened a second-hand clothing store. James was also very active in the Presbyterian Church and was soon ordained a minister.

When he was offered an opportunity to start a new church in New York City, James quickly accepted and in 1840 they relocated to the city, where eventually the family would grow to include six children.

Meanwhile, Elizabeth’s entrepreneurial zeal expanded along with the family size and she opened another second-hand clothing shop as well as a furniture store. With the increase of her family a larger house was needed and they sold their Hudson Street house and moved to a larger one in Brooklyn. Later, they purchased the former Hamilton Club and converted it to a boarding habitat and named it Remsen House, after one of the streets when it was located.

By the 1850s, Elizabeth’s business acumen had sharpened and became even more bountiful when she began buying and selling real estate. When the Civil War erupted, her enterprising success and philanthropy were widely celebrated, especially in the religious community. Some of the accumulated wealth was invested in the building of the Siloam (Shiloh) Presbyterian Church in Brooklyn, where her husband was the founder and pastor.

During the anti-slavery period, the church was an active center in assuring the safe passage of runaways and providing a platform for noted speakers such as Douglass and the Rev. Henry Highland Garnet. One memorable event at the church occurred when the militant abolitionist John Brown was the guest speaker. Unlike so many of Brown’s friends and associates, the Gloucesters did not shy away from his radical plans to spark a slave uprising. Donating to his cause signaled a resolve that they were firmly aboard, demanding that he “do battle with the ugly foe, slavery.”

As a matter of preventing the disclosure of his plans, Brown had withheld them from many of his white supporters, but shared them with certain African Americans, especially those whom he trusted unequivocally like the Gloucesters. Obviously, Brown expected financial support from them but one of his main objectives was for them to be a conduit to other well-endowed potential donors. His plot, as he envisioned it, required a sizable donor base.

Brown stayed with the Gloucesters for a week, and The Brooklyn Eagle newspaper may have published one of the last stories on him before his departure for Harper’s Ferry. “Goodbye, Sister Gloucester,” Brown told her. “I’ve only sixteen men, but I’m to conquer.’ Mrs. Gloucester said to him, ‘Perhaps you will lose your life.’ ‘Well, my life,’ he replied, ‘is not worth much. I’m an old man. In Kansas, the balls flew around my head as thick as hail. I’ll never be killed by a ball. If I fall, I’ll open a ball in this country that will never stop until every slave is free.” And that prophecy was realized.

Throughout the Civil War and afterwards, the Gloucesters were unflinching in their assistance, providing guidance and sustenance to the recently emancipated slaves and helping to spirit them on to destinations of safety. Elizabeth spearheaded the drive to establish the Colored Orphan’s Asylum in Weeksville, Brooklyn in 1866.

On August 8, 1883 in Brooklyn, Elizabeth died of pneumonia. According to the Brooklyn Daily Eagle, she was one of the richest Black women in the nation, worth approximately $350,000 or more than $5 million today. She was in her seventies when she died and her funeral was well-attended with notables coming from far and wide. Unfortunately, none of the noted compendiums of Black Women in America has an entry for her.