Change will come in the NFL to the Washington name 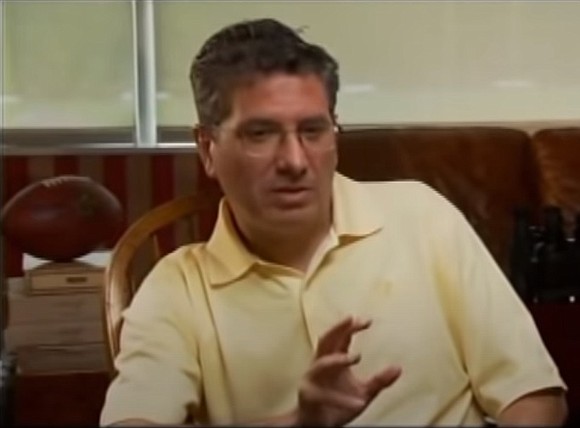 During an interview in May of 2013, Daniel Snyder, owner of the NFL’s Washington, D.C. team (the AmNews refrains from printing the name) was asked about the possible renaming of one of the league’s oldest organizations. The franchise was founded as the Boston Braves in 1932, changed its name to the current iteration in 1933 and moved to the nation’s capital in 1937.

Never say never. A change is gonna come. Cliché, yes, and an appropriate application in regard to this issue.

“On July 3rd we announced the commencement of a thorough review of the team’s name,” the team communicated in a written statement on Monday. “Today, we are announcing we will be retiring the Redskins name and logo upon completion of this review.”

Snyder’s enlightenment has occurred after pressure from Federal Express, which is No. 14 on the Fortune 500 list and owns the naming rights to the stadium in Landover, Maryland, at which the Washington football team plays.

Pressure also came from PepsiCo, Bank of America, and Nike, who removed all of the team’s merchandise from their online store due to the growing attention given to the insensitive and offensive nature of Washington’s name to America’s indigenous people, as well as to many others of various ethnicities.

According to Adweek magazine, an American weekly advertising trade publication, FedEx, Bank of America, PepsiCo and Nike received a multitude of letters signed by 87 investment firms and shareholders asking the companies to sever their ties with Snyder unless the team’s name is changed.

Snyder purchased the franchise in 1999. It’s been his contention the team name actually honored Native Americans. In the organization’s written statement, it noted the name change is “in light of recent events around our country, and feedback from our community.”

Jonathan Nez, president of the Navajo Nation, responded by Twitter on Monday after the team made their announcement about the change.

“July 13, 2020 is now a historic day for all Indigenous peoples around the world. The NFL Washington-based team officially announced the retirement of the racist and disparaging ‘Redskins’ team name and logo.”

The Navajo Nation has offered suggestions to Snyder regarding a new team name. No decision has been made.

Snyder’s decision comes after years of requests and debates over the team’s name and logo. However, it was the murder of George Floyd and the subsequent reach of the Black Lives Matter movement that compelled Snyder to reconsider his previously long-held stance on the matter.