‘This. Must. STOP!’: Toddler’s death rings alarm on violence 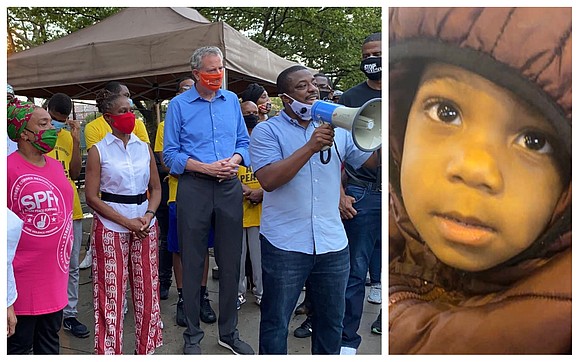 There are cowards amongst us, shooting babies.

One-year-old Davell Gardner Jr. was just two months shy of his second birthday when his life was taken by gunfire in Brooklyn on Sunday night, July 12. The death of the toddler set an alarm of awareness of just how bad violence in the city is.

“The cowards have seized control of the streets,” said Marquez Claxton, retired NYPD detective. “Too often, they are given cover because of a phony ‘alleged’ street code. These criminals have focused their rage inward and now terrorize our family and neighbors...even our babies.”

Once upon a time, one of the laws of the streets was that babies, elders, women and children in general were off limits; street regulation punishable. But, gun violence is on the rise.

While the nightly all-night fireworks have stopped, they have been replaced with deadly drive-bys and random shootings.

The NYPD reports Gardener was in his stroller outside Raymond Bush Playground in Bed-Stuy during a family barbecue when two men walked up to the crowd and opened fire.

The three adults are expected to recover.

Police arrested 25-year-old Dashawn Austin on Thursday in connection with the shooting. Reports indicate Austin was charged with the murder in another shooting in March.

“The community’s just getting worse and worse,” Gardner’s father Davell Gardener Sr. said in one televised interview. “Nobody’s trying to make a change. And it’s sad to say that like every day is just worse. You don’t know if you won’t live to see the next day.”

“This is only a baby, 1 year old, that didn’t even get a chance to start his life,” she said in one report. “I hope they catch the bastards and put them under the jail cell.”

Grandmother Gardner stated, “No kid should have to go that way, whether they’re 1 year old or they’re 15, 16 years old. They shouldn’t have to lose their life. Innocent lives, over somebody’s stupidity, over a coward. That’s what I call them, a coward. And I hope they find who did this to my grandson.”

NYPD Chief of Community Affairs Bureau Jeffrey Maddrey said on social media that Gardener’s death is a sign of violence out of control on the streets.

“This. Must. STOP,” he said. “We as a community, we as a police department denounce this disgusting violence.”

City officials are also weighing in on the recent shooting along with other shootings that have occurred throughout the city. Gardener was one of the 53 children that have been shot so far this year in the city. That’s up from 37 this time last year.

During a span of over 24 hours on Monday, there were 18 people shot in 14 shootings. Among the victims is 17-year-old Lamar Gibson, who was shot during a dispute at George Washington Houses in East Harlem. Last weekend, the city saw shootings go up 277% compared to the same week from last year.

The co-founder of United Front/Afrikan Insurrecktion, Muzik asserted, “The only thing that can save our race from its own destruction is the presence of BLACK MANHOOD. Only Black manhood can create the safe spaces for our babies to grow and inherit the world we build for them. This incident shows the lack of MEN in our communities. Where are the MEN willing to exert their authority and protect our babies and communities?”

“We cannot grow numb to the headlines on our screens or the violence in our streets,” Public Advocate Jumaane Williams stated. “This cannot be considered normal, in our city or anywhere. It must shock us, and shock us into action that stems both the supply of guns into our communities and the many factors that lead to violence.”

Mayor Bill de Blasio said during a press conference on Tuesday, July 14, that he spent time with Gardener’s family speaking with his mother, aunt and grandmother. He described the family’s grief as” a deep well of pain you could see in their eyes.”

“No parent, no family should ever have to go through that,” he said. “And if you experienced something like that firsthand, I assure you, you could easily fall into despair.”

Last weekend, de Blasio and his wife, Chirlane McCray, participated in an “Occupy the Corners” event organized by Harlem-based anti-violence organization Street Corner Resources (SCR). The mayor announced a new initiative called Take Back the Block aimed at keeping streets safe by increasing police presence in areas that have become targets for violence.

In an interview with the AmNews, SCR CEO and founder Iesha Sekou said her organization has been able to keep violence down and the rise in shootings is heartbreaking.

“After experiencing a good run with a reduction in violence, we’re now seeing the spikes of yesteryear,” she said. “This is what we saw in 1993, 1996, around that time. This is the kind of violence that we saw in every borough. It almost makes you feel somewhat frustrated.”

Sekou said that some of the violence is blamed on conflicts among people and then seeing each other at outdoor social gatherings like block parties, picnics and barbecues. Many are using violence to settle the score leaving deadly results.

“What happens at these parties is that people see people they have beef with,” Sekou said. “All of these people are becoming very visible after spending long periods of time in prison. People have old beefs that were never mediated and people who are being released with no oversight. But there are a whole host of other things. Even some violence that may have been quarantined or incubated is now loose so to speak.”

Claxton, founder of Black Law Enforcement Alliance told the AmNews, “Those who fully reject professional policing and believe that internal community systems can adequately secure us, must show and prove. If we fail to bring those responsible to justice, we are lying to ourselves and coddling terrorists who thrive off of our fear. We have to expand the use of non-traditional anti-violence strategies and confront head-on the purveyors of this senseless violence.”

Bronx Democratic congressional candidate Jamaal Bowman said there has been decades of community neglect by government officials who are not addressing the ongoing problems.

“We have to talk about moving resources to the communities that are disproportionately being impacted by senseless violence,” Bowman said. “I’m not talking about funding more policing–– if we’re going to break the cycle of violence, our response can’t be centered on law enforcement, since we’ve seen how that only exacerbates the problem.”

In a time where some observers have charged that professional agitators and even law enforcement have been involved in the national unrest; some are even asking who is actually doing the shooting. Retired NYPD officer Noel Leader posed a question on social media, “Am I the only one suspicious of this increase in shootings at this particular time (BLM protest, calls for defunding the police, CJ Reform, bail reform, officers being arrested ) ????? How many of these shootings resulted in an arrest and what percentage of these shootings are random with no connection to the victim ?????”

“There is no true justice without safety, and no safety without justice,” said Brooklyn Borough Pres. Eric Adams. “We must engage our policymakers, clergy leaders, community advocates, law enforcement officials, and activists to build on the meaningful reforms we have achieved in recent weeks while tackling the troubling surge in shootings.”

Last week throughout the city there were 74 gun incidents resulting from 101 shooting victims. The NYPD said that as of July 5, shooting incidents have risen by 54% compared to the same time last year.

Some community stakeholders determine that while there is the basic criminality at play; there is also crippling poverty, unemployment, institutionalized racism, and a lack of resources. Pandemic frustration, fear and consequences are self-evident. Conditions have been exacerbated they note in this COVID era, with the commercial Black Lives Matter reaction in the wake of police brutality cases, and an administration which has been seen by some to inflame––rather than work towards––de-escalating deadly conditions.

Writer and activist Kevin Barron stated, “Every time there is violence in our community some politicians, law enforcement officials, and media use the opportunity to blame it on bail reform and defunding the police. When in actuality the root of the problem is lack of employment opportunities, quality education, recreation centers and in general a lack of investment in our communities which would direct resources to eradicate poverty.

“Don’t get me wrong there will always be people who do dumb s—-but let’s not lose focus on the ROOT causes of the problem.”