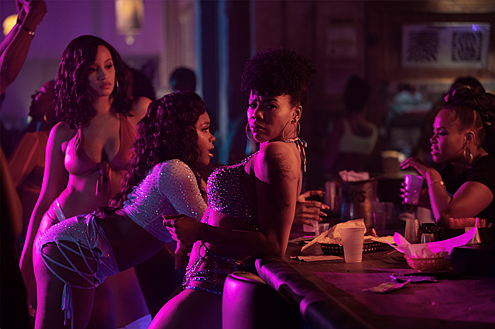 Starz’s new series “P-Valley,” executive produced by playwright and showrunner Katori Hall, is adapted from her play “Pussy Valley” and it’s explosive. Keeping it real from the beginning, Hall made it her business to hire only female directors for the show (thank you Ava DuVernay). It’s the work of music video helmer Karena Evans that sets the visual style in the pilot giving the other seven episodes a clear perspective. The result of this creative work and thoughtfulness is that “P-Valley” is much more than a series about mostly Black strippers working.

In the first episode of “P-Valley,” we meet Mercedes (Brandee Evans), a powerful, passionate dancer at The Pynk, a strip club tucked away in the fictional town of Chucalissa, located somewhere in the sleepy Mississippi Delta. She is also a woman carefully nurturing a dream and she walks, struts, grinds, and defies gravity on the pole, with a confidence and inner fire that illuminates her everywhere she goes.

Season one of “P-Valley” offers eight episodes. It’s a lot to drink in, but it’s exciting to discover a new world and the players in that world. What a world—it’s filled with struggle (the struggle is real), family disharmony and so many secrets all wrapped around money.

The dancers are sexy and we see their world from their point of view. We are placed on the stage looking out and into the audience, getting glimpses of the mostly male clientele who seems to appreciate the women, looking at them as artists.

“P-Valley” opens up mysteriously in the aftermath of the Houston floods where a young woman (Elarica Johnson) finds a discarded wallet, swipes the driver’s license, and jumps on a bus only to leave suddenly at a rest stop.

Silent as the grave at first, she enters an amateur-night “booty battle” at The Pynk and lands a regular gig being anointed Autumn Night.

Inside The Pynk the leader is the gender-fluid proprietor Uncle Clifford (Nicco Annan) who possesses a strong fashion sense and a deep commitment to the livelihood of the women that he employs.

Mercedes’ dream lies in the girls’ dance team that she coaches. She dreams of opening her own gym. The other dancers include the one white dancer, Gidget (Skyler Joy), who hails from a stripping family tradition, and Miss Mississippi (Shannon Thornton), a young mother in an abusive relationship.

Inside The Pynk there is an almost mystical world because outside it is surrounded by colorless strip malls and payday loan centers—in short, the scenery is depressing. But the series delivers “place” providing the audience with the music that perfumes this world and the language that is the key to learning about the people that make Chucalissa a real place.

Uncle Clifford and The Pynk are faced with adversity, illegal foreclosure which is backed up by the Black mayor who thinks that the club is a blight on the town.

In reviewing eight episodes the plotline gets thinner as the issues swirl around a casino developer trying to snatch up all the real estate starting with The Pynk. It would not be an accurate portrayal of the south if there were not church politics. In “P-Valley” the subplot dives into Mercedes’ complicated, holier-than-thou mother (Harriett D. Foy) who dreams of becoming a minister and does something unspeakable to make that dream come true.

Season one of “P-Valley” is powerful and I found myself wanting more, which is a great sign for a brand-new series.

I think that the show understands dreamers and what it takes to just keep going. The show understands the real challenges of life in America and it pours out of the characters, with each one of us seeing bits and pieces of ourselves in these women.